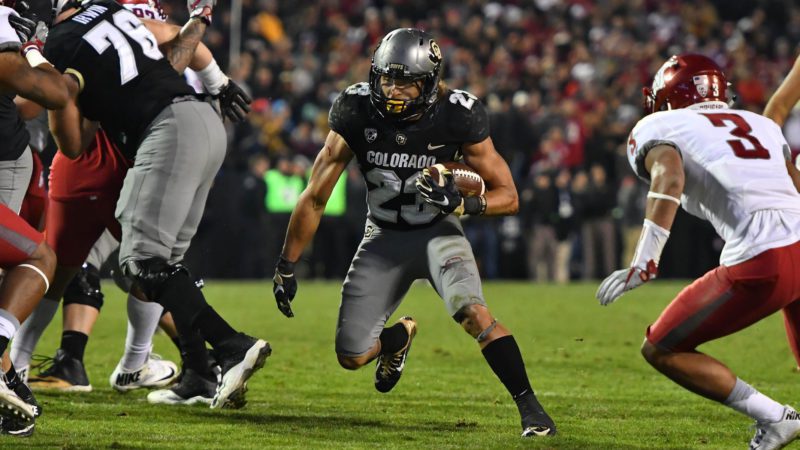 The Colorado Buffaloes have undergone one of the starkest turnaround in college football. The team that went 1-8 in the Pac 12 last season, went 8-1 in conference play and was in the Pac 12 championship game this year.

One of the biggest catalysts to that success was junior running back Phillip Lindsay, who accounted for 1,653 all-purpose yards and 17 touchdowns (2nd in the Pac 12). On Monday, Glenn Spencer was asked about Lindsay and how he compared to any backs of the Cowboys have faced so far.

“Baylor had [Devin] Chafin that was good like that, slashy guy. Reminds me a lot of Justice, going against him in practice. I’ll tell you, he’s so tough for his size, people will bring pressure and he doesn’t give it a second thought putting his chin on the linebacker.”

That size (5-foot-8 and 190 pounds) plus an early season-ending injury his senior year of high school probably contributed to his lack of offers to play Division-I ball. Per 247Sports, only Utah, his uncle’s alma mater and Colorado extended offers to the speedy back.

“Boy, I’m trying to think of any other players that might be that slashy guy and can bust,” Spencer added. “He’s his own guy. We respect him a lot, and mostly I always tell these guys to respect authentic toughness, and I think he’s a real guy.

“I think he’s an authentic tough guy, and that’s why I respect him a lot, and they’ll be a great challenge to try to win this game.”

Lindsay’s cousins, Tony and Gabe, both played at OSU and both made an impression on Phillip growing up. Tony led the 1997 Cowboys to the Alamo Bowl where they fell to Purdue 33-20 (Drew Brees was a backup on that team).

“Both of them were excited to hear that I was going to be in the Alamo Bowl.”

Tony Jr, the former Cowboy QB (and the only OSU quarterback to sport a winning Bedlam record as a starter) was also Phillip’s offensive coordinator in high, under head coach, Tony Sr.

If OSU wants to have come home with an Alamo Bowl trophy and their tenth win, they’re going to have to control Phillip Lindsay and Colorado’s ground attack.