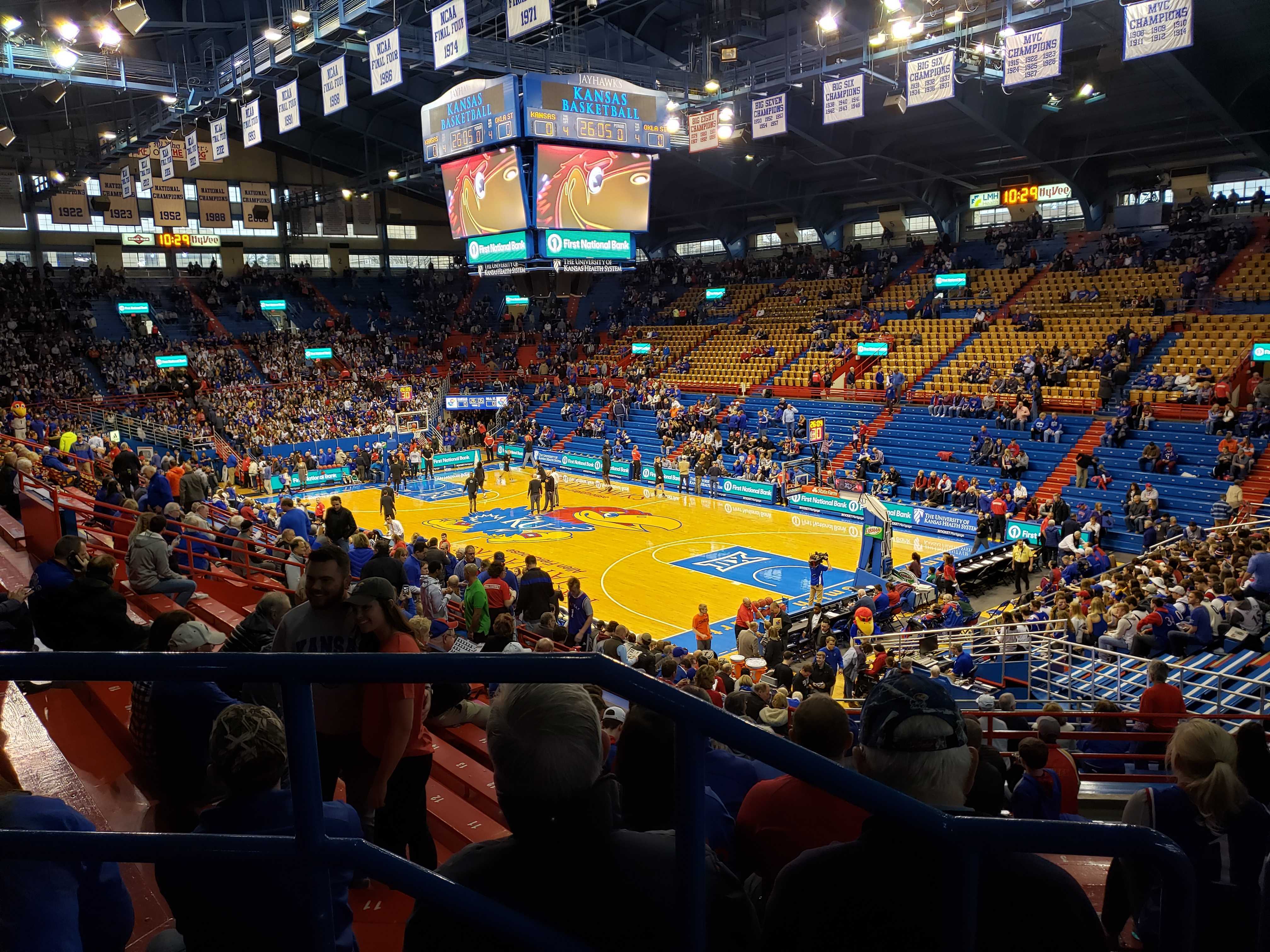 Myself, Cameron Jourdan from The Franchise and Hallie Hart, Jeremy Kolok and Zach Hake from The O’Colly headed out west of Stillwater where we met up with The Oklahoman‘s Nathan Ruiz at Cowboy Travel Plaza about 6 a.m. I hopped in Nathan’s car and we made the trek to Lawrence.

If you’ve never gone from Stillwater to Lawrence, you haven’t missed much. It’s a four-hour journey that includes Wichita, El Dorado and a bunch of view that look like this (excuse Nathan’s dusty windshield): 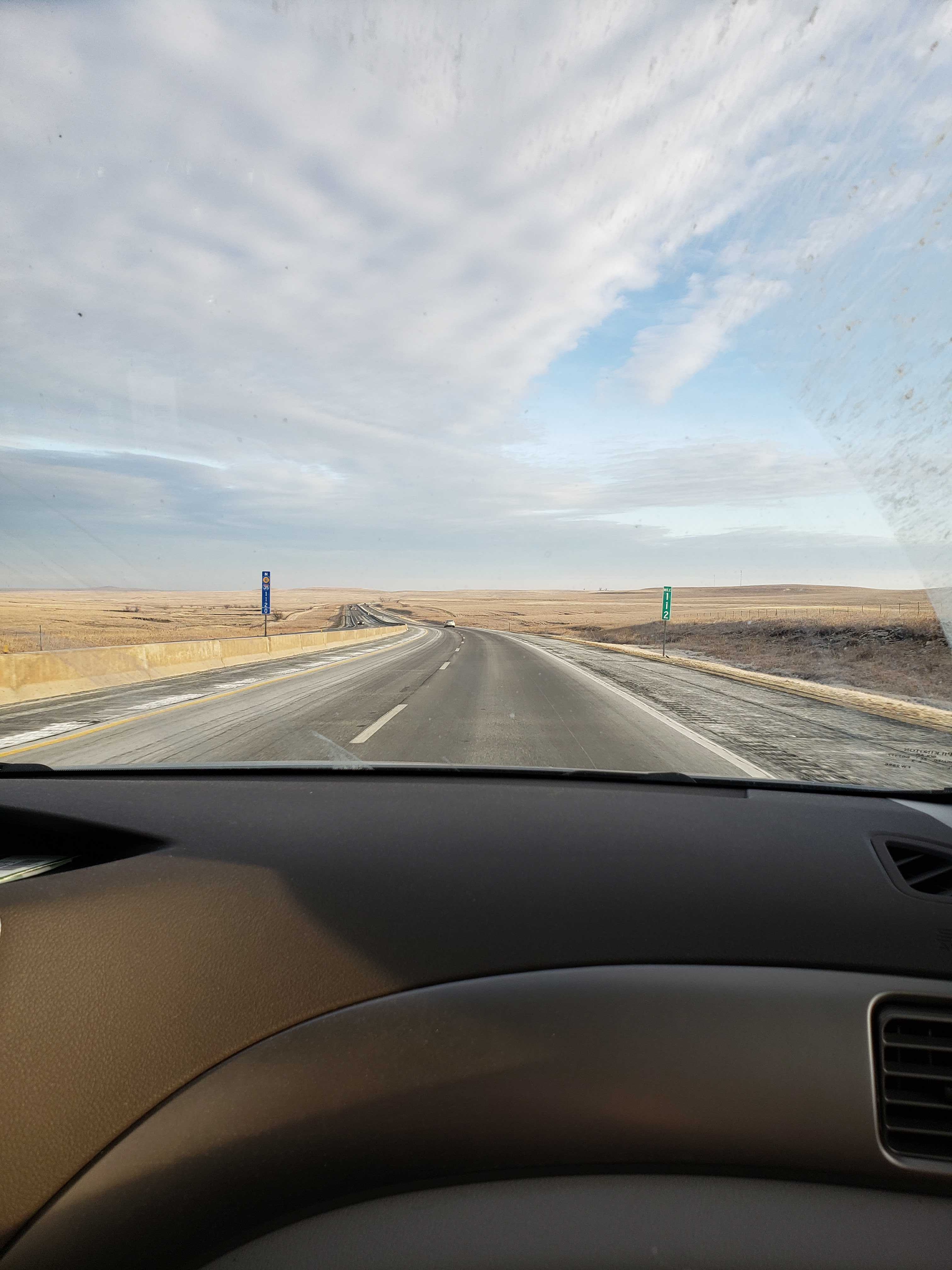 On the day trip Nathan and I watched the sun rise and set in the Sunflower State. Those were two definite highlights compared to the hours of nothingness. We talked media stuff, sports and general life updates.

It was my third time in Lawrence, second for a basketball game, so the process of getting to and in Phog Allen Fieldhouse was fairly painless. If you’ve never been, the west hallway of the ground floor shows the history of KU hoops. It’s Heritage Hall-esque but rather than trophies, there are photos of all the greats down the walkway. I’m going to apologize here for not taking as many pictures as I should have.

In the northwest corner there’s a roped off walkway between the Jayhawks’ locker room and the tunnel leading to the floor. At any time, fans are crowded around hoping to catch glimpses of players as they run by.

My first stop in the building was the media workroom where the complimentary food was a breakfast casserole of sorts that contained eggs, hashbrowns, sausage and gravy. It was tasty, not anything revolutionary, a solid 7 of 10.

From there I headed to my seat in the southwest corner of the arena. Here was my view:

It shocks me every time I see the building it holds 16,300 people. It doesn’t look as big as GIA, but as Nathan pointed out, it’s probably because it keeps going out instead of straight up.

It’s an amazing atmosphere. The stands are wooden. It reminds me of an old high school gym, obviously on a much larger scale and in the best way possible. The crowd was outstanding, as most of the 16,300 stayed to the final horn, singing the ominous Rock Chalk Jay Hawk in the final minute. It’s be like if a full GIA swayed and sang the Alma Mater while the game was still going. All the goosebumps.

I wrote this in my five thoughts, but I’ll state it again. It’s a building that feels old, but not in the way like it’s about to fall apart. It feels like you’re a product of the past there experiencing the history. If you’re a sports fan in general and especially a college basketball fan, the hours of flat earth you have to go through to get there are well worth the trip.

After the game, I went with Nathan and the Tulsa World‘s Mark Cooper to Dempsey’s Burger Pub. It was my third time there because it’s so good. I had the Bleu Burger with sea salt covered sweet potato fries: 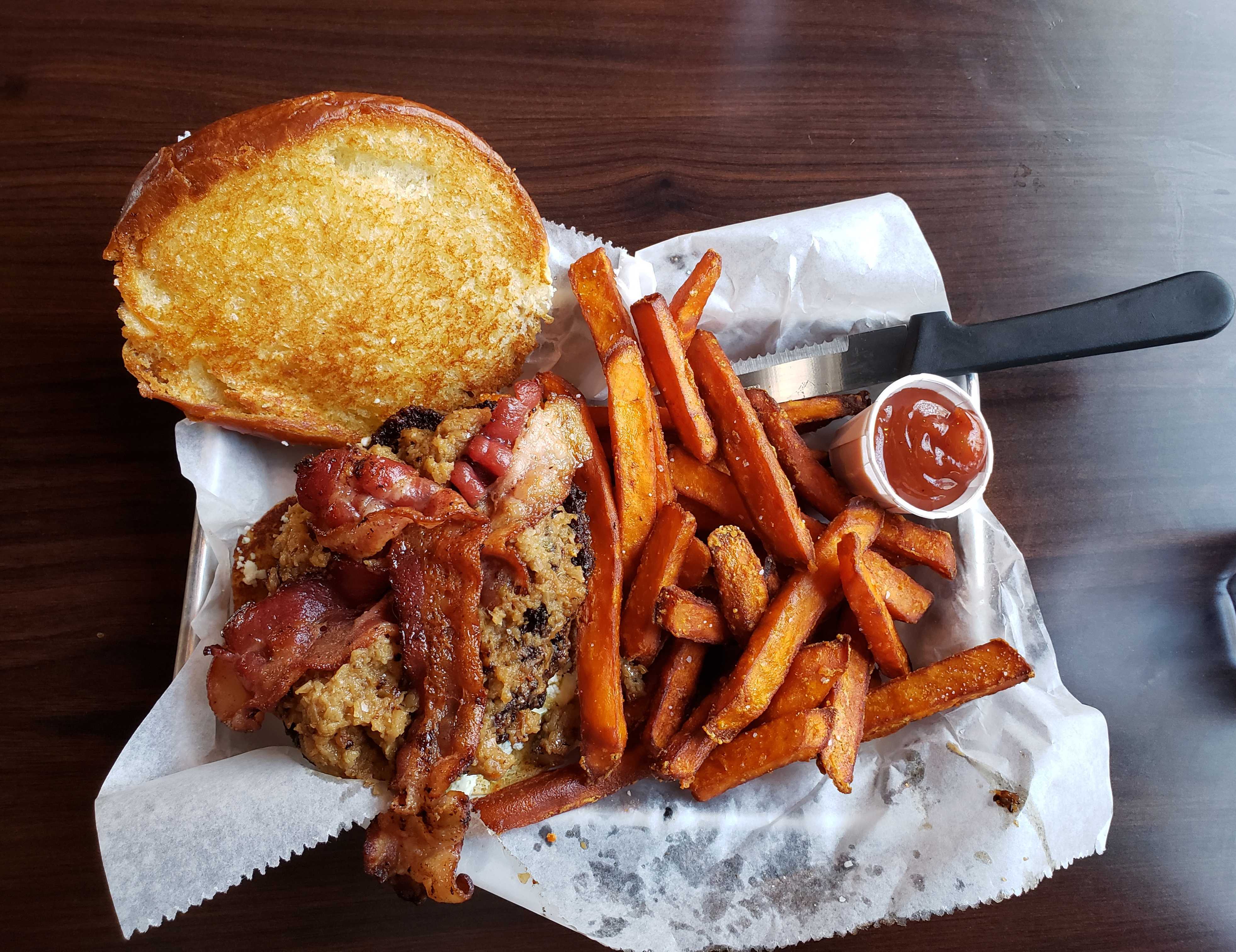 It was absolutely outstanding. It had shallot marmalade, bacon, beef and blue cheese. (I had to google both shallot and marmalade before ordering, both good)

After dinner, we said our goodbyes to Mark, filled up on gas and started the journey back. I drove the ride home because Nathan had to crank out some Pistol Pete stories for The Oklahoman‘s Sunday issue.

The ride back wasn’t any better or worse. Sure, it’s dark, but it’s not like you’re missing anything. After I got on the interstate, my GPS’ next direction was to take the Stillwater exit some 350 miles away.

I got home about 9:30 p.m., listened to my girlfriend’s story about her day and promptly passed out.