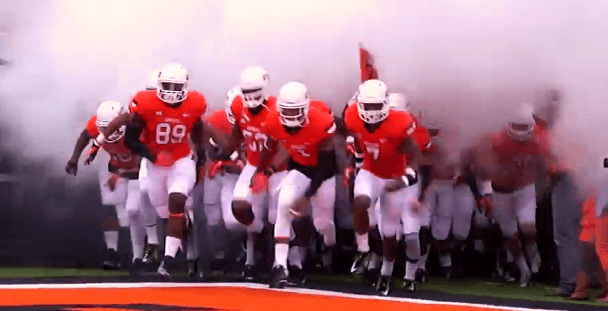 On Wednesday afternoon Oklahoma State athletics rolled out a new website and it looks pretty terrific. It’s all the things you would think a sports website in 2014 should be — splashy, clean, and a little bit self-aggrandizing.

OSU covers itself — that has become clear over the past few years. It doesn’t need the Oklahoman or the Tulsa World or, my gosh, this site for distribution of its message.

It has the Internet. That’s all it needs.

Hire a few smart people to write and interview and put stats together, build a video production team, and all of a sudden you’ve leapfrogged every media outlet that covers you.

You get to control the message — or at least attempt to. It’s smart and, though a bit contrived at times, good for business.

The other thing OSU did this week was create its own highlight package from the Missouri State game. You might say “OSU has always done this” which would technically be true but this was more than “cut those five plays and throw Dave Hunziker audio on top of it.” This, as you can see at the top of the page, was incredibly well done.

That has me excited about the future — to see what Orange Power Studios has in store. OSU has lagged in the area of video production and it knows it. And now it’s trying to correct that.

As maddening as it gets at times, it's kind of cool to be living through strangest, most interesting media era in humans' 250,000-year run.

I do think the important thing in all of this is that outlets like the Oklahoman and O’Colly and Tulsa World don’t fade away. That’s a natural path for places like that to take when they no longer control content but there’s nothing more dangerous if you’re OSU (or any school or organization) than covering the very thing you’re trying to present to the public.

Journalism is important — a protection of the fourth estate as an independent entity, while less important in sports than other areas, is an integral part of a highly functioning society.

I never won’t believe that.

So enjoy the very orange message OSU presents but always be leery of motives — both yours and theirs — as you try to figure out what it all means.

And as always, never stop asking questions — because that’s half the fun anyway, right?