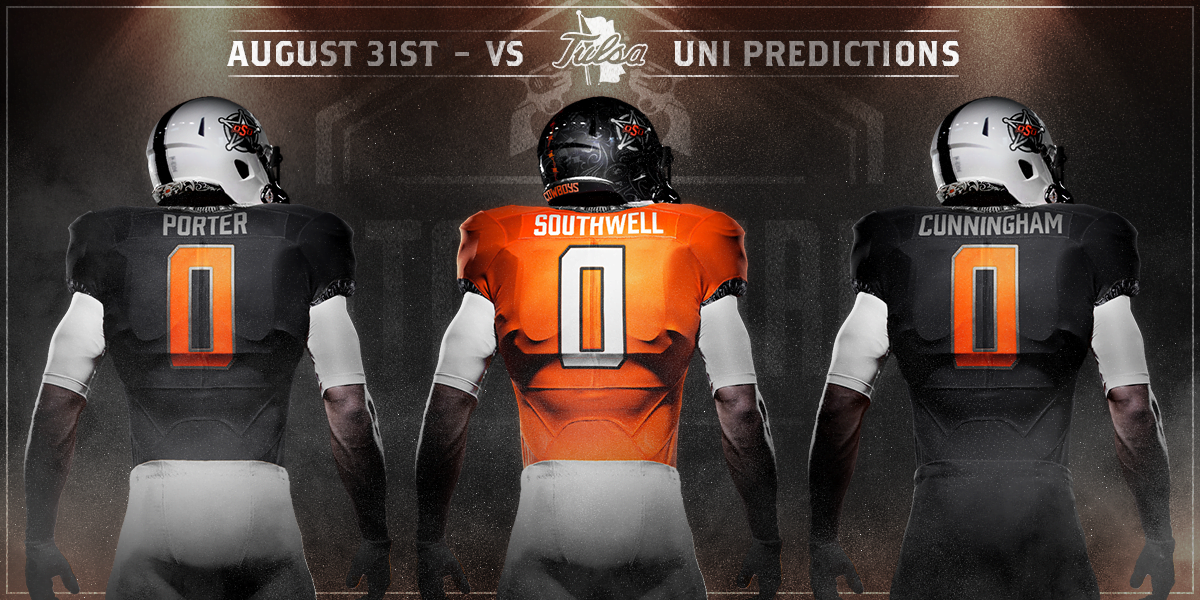 Welcome back to our weekly uni prediction post. As always, the graphics king Chris Knox killed it with his template this year. We’re going to keep track of our yearly scores on the actual jerseys, and he was able to toss our names on them so you know who is who. Pretty awesome.

Let’s get to the picks this week.

It seems so easy to go white-orange-white in the first game, and I almost did. But Oklahoma State has a thing with wearing black for Thursday night home games (Colorado in 2009, Arizona in 2011, Tech in 2014) so I went with that. I feel like the chrome badge is a lock for the helmet, and while I like Carson’s black pants pick, I think they go Baylor 2013 with the W-B-W (one of their best looks ever, by the way).

My original pick was the base look of W-O-W, which I think works really well for home openers. But because this is a Thursday night game, I think they will run out of the tunnel with a little more flash. The barbed wire helmet will do just that. Barbed wire was worn in three of the last four games last season, so I think they pick back up right where they left off.

It wouldn’t surprise me to also see them come out in black jerseys with it being a Thursday night game, but I think orange should be worn against Tulsa. Just about everyone loved the tri-color combo featuring a throwback helmet for homecoming. This all-modern version of B-O-W would also be a sight to see.

Week 1 is always the hardest to pick because you have nothing to go on. All of the 1,945 (see what I did there?) uniform combos are available. I tried to pick something unusual and ended up with White-Orange-Black. It’s not something I wanted to see, and knew at the time looked hideous, I just tried to get cute. Fortunately the podcast with Porter and Southwell allowed me to change my pick.

The obvious selection here is the traditional white-orange-white, but I liked Porter’s reasoning. The Thursday night effect is real: Black is what they’ve always worn.

So my final answer is OG Weeden2Blackmon with white (badge)-black-black. I really don’t like any combos in which the jersey and pants are the same color and the helmet is different. I find it uneven and I’ve never really liked this look. But I do know it’s an extremely popular combo dating back to the 2011 Arizona game and the aforementioned game when Weeden sacked Alex Cate for the iron throne. But it’s way better looking than my original pick. Anyway, here’s to an undefeated uni season.