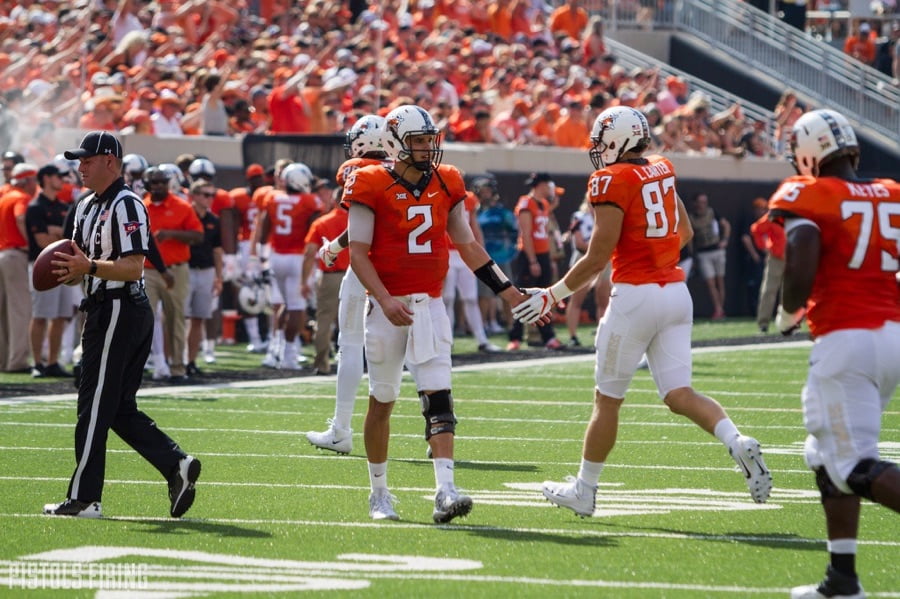 Mason Rudolph didn’t throw a pass against TCU until Oklahoma State got into a third and 11 on its first drive.

Justice Hill ran the ball five times before the Cowboys’ potential Heisman Trophy winner got his first shot in their 44-31 loss Saturday. Of course OSU was trying to set a tone and a tempo on its first possession, but it backfired and established a sour mood for what was to come, as it has from time-to-time in recent Cowboy contests.

Against Tulsa, Tyron Johnson went deep for a 44-yard score on the first possession. In Mobile, OSU went three-and-out the first time it touched the ball, but it didn’t matter too much; it was South Alabama. And of course at Pitt, Hill ran it in from 20 on the first drive.

Johnson said those types of early touchdowns are obviously one of the Cowboys’ main goals.

Rudolph went deep to Marcell Ateman on that third and 11 against TCU, and it landed about two yards beyond Ateman’s fingertips. But you almost forgot about that because after another Frog field goal, James Washington went for 86 and the lead.

But of course we all saw what happened after that. Rudolph went 21-of-38 for 317 yards, one touchdown, two interceptions and a fumble. With those stats, he would have finished with a 123.5 quarterback rating, only 17 points better than Bedlam last season.

In 2016, the Cowboys made habit of the second-half comeback. Against Iowa State, they scored 17 in the fourth quarter after scoring just seven in each of the first three. At Kansas, OSU led by four at halftime, and the final score was 44-20. And against the Frogs last year, the Pokes scored 21 of their 31 points in the final two frames.

Although they didn’t have too much success early in games last year, Rudolph said getting a first-possession score is the goal for them “every single season.”

“This year, we’ve been a lot more urgent with our preparation, and it’s paid off early,” he said.

Rudolph said even when six points go on the board after the first touch, they can’t get too high, and if they go three-and-out, they can’t get too low. There isn’t too much difference on the sideline besides a few more high fives and smiles, he said.

Coincidence or not, Rudolph’s two worst games in the last two years, statistically, have come when the Cowboys did not get in the end zone on their first possession. On average, he puts up a rating more than 85 points better when OSU gets that first-drive score.

There are almost four quarters of football to make up for a poor first chance, but those stats tell a story beyond chance, especially since the 2016 season-opener.

In that span, OSU has not gotten points on its first drive nine out of 17 times. Rudolph’s lowest seven game ratings all came in those nine games, and four of those were losses.

It’s something to keep an eye on in future games. In the last two years, OSU is 4-5 in games when they don’t score on the first possession and 9-0 in games when they do. Getting off to a hot start matters in college football, and that’s been especially true of Rudolph’s Pokes.