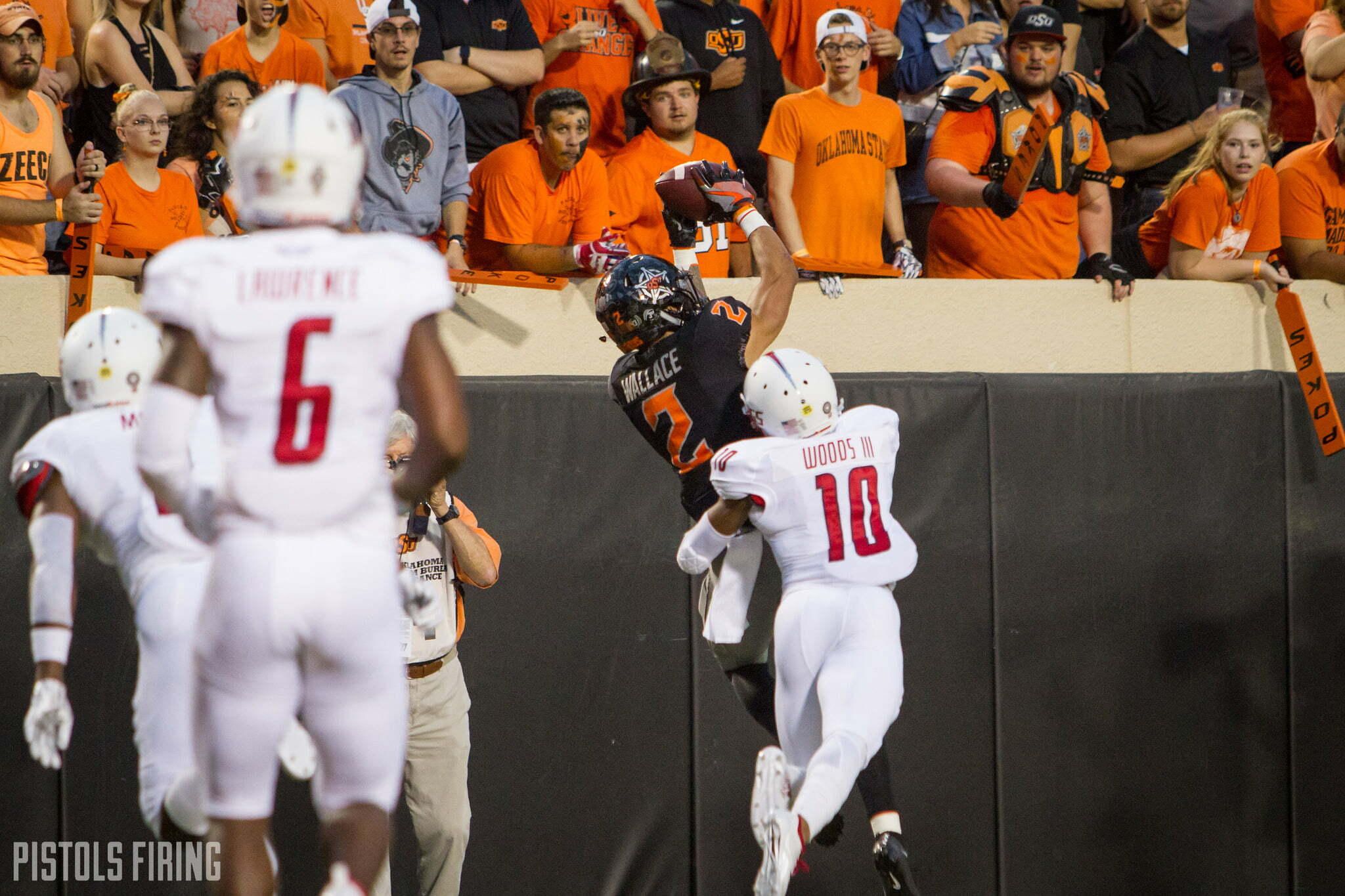 Take down the missing signs. Ignore the notices on the back of the milk cartons. The Cowboys’ premiere outside receivers showed up in Week 2.

“They’re guys that we can count on,” OSU coach Mike Gundy said. “They’ll need to play that way and even play better as we progress into next week.”

To put those stats loosely in perspective, in the Cowboys’ win against South Alabama last season, James Washington and Marcell Ateman combined for seven catches, 149 yards and three touchdowns.

The two still have a long way to go to be feared as much as Washington and Ateman were, but tonight was a solid first step.

At the beginning, Saturday’s game looked like Johnson’s show. Johnson, a redshirt junior who caught two passes for 13 yards in Week 1, started the night with a 60-yard catch-and-run on the Cowboys second drive. He scored on OSU’s next drive off a 1-yard jet sweep.

Johnson’s 60-yard reception came from a play-action roll out where Johnson drug across the middle. The Cowboys used the play again in the third quarter with similar results. Johnson caught the pass for a 32-yard gain.

Wallace opened the game’s scoring in the back of Boone Pickens Stadium’s west end zone as he caught a pass off one of his many fade routes. The score was from 11 yards out.

WATCH: Cornelius to Johnson and Wallace takes #OKState 71 yards and into the end zone in just 23 seconds!

Wallace finished with 10 catches (about half of which were him just being better than a USA corner) 166 yards and touchdown with at least a pair of pancakes. He had four catches, 48 yards and a touchdown against Missouri State last week.

“It’s just a blessing, honestly,” Wallace said. “The defense that South Alabama was running just gave us some opportunities to throw the ball deep. Last week, Missouri State didn’t really let us throw it around that much, so we just went out there and made the plays that we knew we could make.”

Here’s an example of Wallace simply being better at football than most people.

“Those guys got to win,” OSU offensive coordinator Mike Yurcich said. “You see it every game, there’s always a play that’s one-on-one, and they’ve got to win that matchup. We’re glad that we have a lot athleticism as a whole that we can win those battles.”

The last time two or more OSU receivers went over 100 yards and one of them wasn’t James Washington was all the way back in 2012 when Blake Jackson and Josh Stewart did it. Wallace and Johnson did it so easily on Saturday that it makes you wonder if it’s just the first of several times this season.