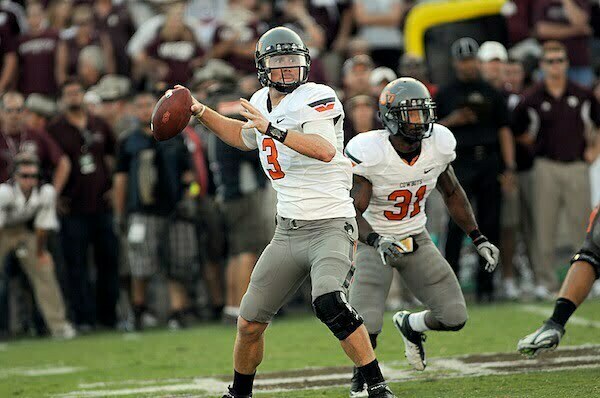 Before the season started I made some predictions about how the Cowboys would fare this year, and specifically how prolific Brandon Weeden would perform in his senior campaign.

I looked like a fool coming out of the gate after he looked average against Louisiana but everything came together last weekend in College Station for, surely, the most spectacular half of quarterbacking OSU has ever had.

Let’s take a look at where we are with some of those predictions I made as well as a few other Weeden superlatives through four games.

Would break the completion percentage record he set last year of .669 – Currently at an absurd 74.3%

Would be in New York City on December 10 – I’m going to be the conductor of this train until it happens or we careen off the tracks.

Would set the career TDs thrown record this year – Needs 18 more to tie Zac. That’s definitely hanging in the balance, but I say he gets it. Hell, he might throw for 7 or 8 against KU and Baylor.

On Sunday Pat Jones said this about Weeden:

Pat is confused and sounds like he’s just trying to spew hyperbole because to compare someone, statistically or otherwise, to Barry Sanders is not a good basis for any argument.

The point remains though, that the aged gunslinger from Edmond is conjuring up historical comparisons the likes of which we’ve never seen come through Stillwater. I hope you’re enjoying the ride.

This post is part of a season-long series on the Heisman hopes of Brandon Weeden and Justin Blackmon. Click here to read more.