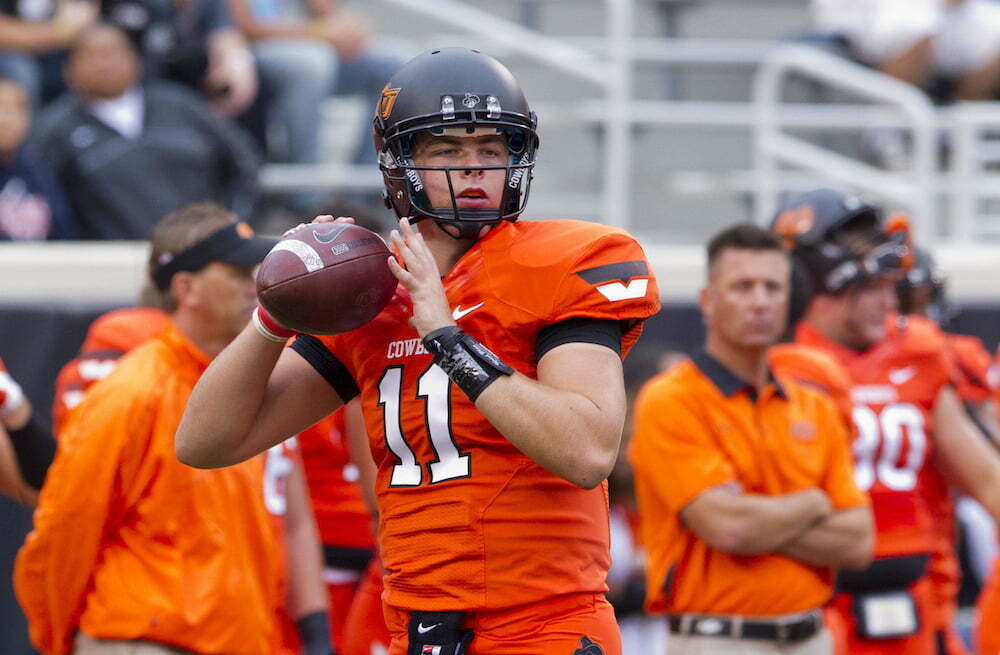 The long answer is more complicated.

I’ve been trying to collect my thoughts for a few days on this and I’m still not totally sure I’ve arrived at anything substantial but since this is an OSU blog and I’m supposed to deliver you something worthy of being consumed I thought it high time to give it a go.

First, how great is that photo above? Pretty much says it all, doesn’t it?

Wes Lunt[1. Or “a source close to Wes Lunt — which…whatever.] has made known that he wants to transfer to one of the following schools: Vanderbilt, Tennessee, Southern Mississippi, Louisville, or Illinois.

Obviously three of those five are out[3. There have also been rumors of mutual interest between Lunt and Notre Dame.] — unless he wants to pay for a year of school which is what “blocking a transfer” means. Lunt can still go to one of the schools on Gundy’s list but he’ll have to pay his own way.

Those are really all the facts — there’s a lot of he said/she said going on but this is what we know.

I keep telling myself there has to be more to the story, especially with the Southern Miss thing. Mike Gundy is a lot of things (many of them weird and potentially bizarre) but I’m pretty sure he’s not vindictive.

And yet I’ve come up empty-handed when trying to think of reasons Gundy would care about Lunt going to a Pac-12 or SEC school other than…well…spite.

I think he misjudged (badly, I might add) Lunt’s willingness to sit out a year behind Chelf and Walsh then come back to compete with Walsh for the starting job in 2014. Although I’m not sure what the thinking is from Lunt given that[1. Other than him being homesick — which is probably the case.], no matter what he does or where he goes, he’s going to have to sit out a year.

I also think everybody in Stillwater is in love with J.W. and maybe Lunt saw the writing on the wall and bailed before he was holding a clipboard for the dude who could barely throw a 12-yard out.

Nobody has the real story so at this point everything you hear is nothing more than speculation (see conspiracy theories below for loads of fun).

What I do know is that, as Berry Tramel wrote today and as was depicted on the front of the Oklahoman, this looks terrible for Gundy. There’s no light in which you can paint this where Gundy doesn’t look like the bad guy. It’s one thing if the kid is trying to roll with Cale Gundy in Norman and it’s an entirely different thing if he’s trying to hook up with James Franklin’s guys in Nashville.

As Scipio wrote today — what are the odds OSU plays one of these SEC or Pac-12 teams in a bowl game? 1%?[1. For those saying “but we play them in the regular season!” — there are no SEC/Pac-12 teams on the schedule for the foreseeable future so, oh I don’t know, don’t schedule them if it’s THAT big of a deal to you.] And even if we did, wouldn’t that be…I don’t know…kind of fun?

Instead, and I can’ believe I’m writing this, Gundy comes off as a egomaniacal clown who’s throwing a fit because his old QB1 is bailing before the season and he didn’t inform him until after signing day — part of me wonders if the “wait, we don’t know who the starter is” thing was just a mini-ploy to try to get Lunt to stick around.

Whatever the case, Gundy’s always been a “hey, we’ll win with our guys” guy which is why this is so bizarre. I don’t understand it. I can’t, for the life of me, figure out why Mike Gundy is so upset about his third string quarterback transferring to a school where he will likely never face him again.

So that leaves us with…

I have three for you.

1. Tim Beckman is in Gundy’s back pocket (or vice versa) — Basically everything Gundy has done so far screams “I AM DYING FOR YOU TO ATTEND ILLINOIS!”[4. If you’re Travis Ford it might be “I hear Illinois has a great academic scene! Big 10 games are rife with tradition!] so do with that what you will.

I know Gundy and Monken are boys but it would sting less to lose him to someone in the Big 10 than it would to the dude who recruited him.

2. (and this one is not, um, unfounded) Monken called Lunt the second Gundy said Chelf was the guy at the beginning of the spring — This is, obviously, not legal but something tells me Monken cares very little for what’s legal and not legal in the world of college football.

I’m not saying it did happen[4. Somebody I talked to IS saying it happened though.] only that it could have. And if you cite this Oklahoman article saying Monken already denied it…uh…is he going to admit to illegally tampering with one of the best going-to-be-a-sophomore QBs in the country at his old school?

3. Gundy is trying to force Lunt to stay (credit to Jeremy Fowler for this thought) — What happens if you block him from going to all 123 schools? Does he just stay? This is where I look at the NCAA and say “this is on you guys — schools have too much power.”

Why does Mike Gundy, who has six years left on a contract, get to leave for Tennessee (if he wants) but Wes Lunt, who has zero months left on a one-year contract wants to leave he is disallowed by the school that no longer holds, from what I can tell, any legal jurisdiction over him.

Not sure if you guys know this but college athletes are on one-year contracts for their scholarship, they can be not renewed. In fact, OSU voted against the ability to make these multiyear scholarships when it came up last year and even though it was passed OSU has been one of the schools that doesn’t really engage in giving them out.

This is insane! <—- Travis Ford text

Not only is it insane but I think it’s kind of a joke. It’s true that the NCAA makes it hard for schools to not renew scholarships but this site exists for a reason — because it’s still possible.

All that to say, I find it mighty hypocritical of Gundy to do his song and dance with Rocky Top last fall then scoff at the thought of his third string QB doing the same in the spring. His third string QB who makes $0.

If he’s so freaking good, why didn’t you just start him to begin with?

And another question is why wasn’t all of this figured out before the transfer was announced? I know we’ve already established the fact that you basically can’t believe anything Gundy says in press conferences but apparently that applies to press releases now too. Here’s the press release about Lunt from Gundy:

He’s leaving on good terms and is making this decision based on what he thinks is best for his future.”

So yes, I’m #TeamLunt on this one. He did everything you asked him to do — he played as well as you could have expected an 18-year-old freshman 1,000 miles from home to play.

If he wants to move on and in doing so doesn’t disrupt the general flow of your competitive balance (that is, go to another Big 12 school) then who cares? Why is it such a struggle to let someone move on with his life?

It’s ridiculously petty for Gundy to hold a 19-year-old kid’s future hostage because he doesn’t like the looks of his destination of choice.

In this article by Jeremy Fowler of CBS, Gundy notes that because he publicly backed Bobby Reid five years ago, recruiting has taken off:

Gundy estimates he’s scored close to 20 close-call recruits in the last five years because of how much mothers loved how he publicly supported a player.

So I leave you with a question today about the Wes Lunt saga that Gundy left everyone with in that famous Bobby Reid video five years ago: