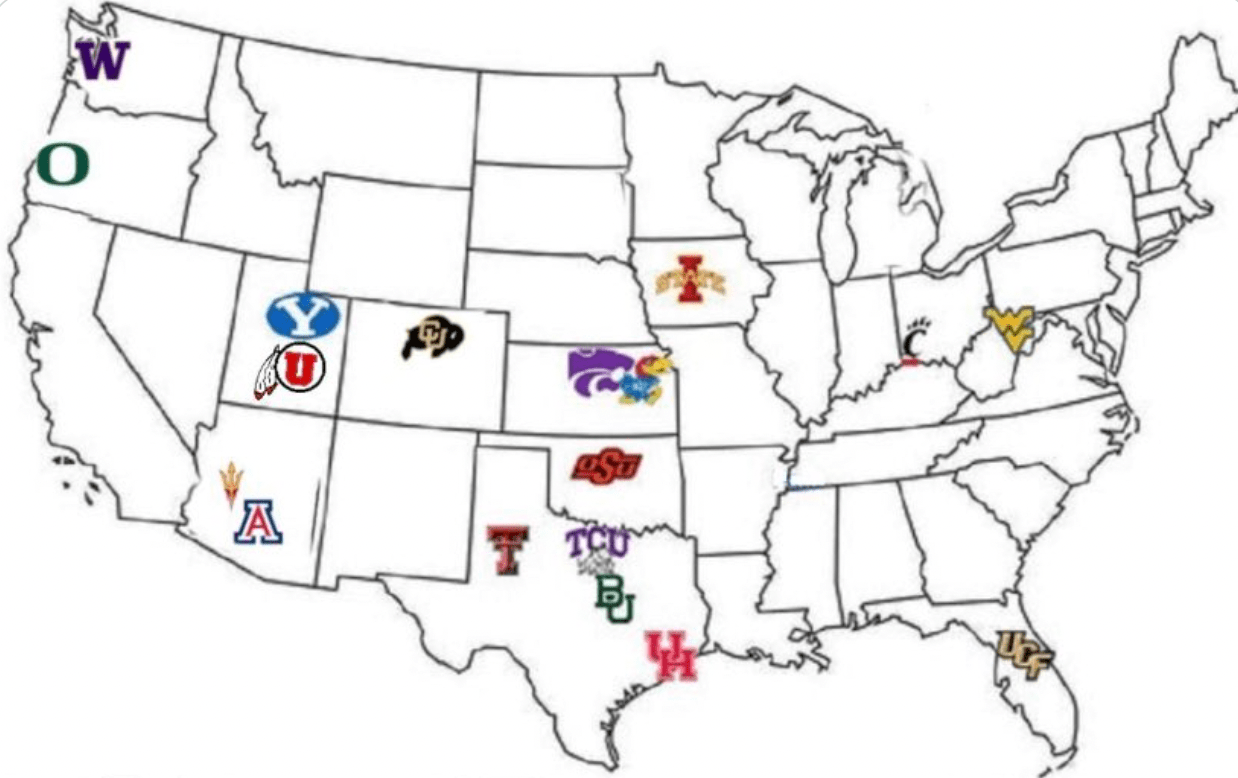 A report that surfaced on Tuesday from Dennis Dodd at CBS Sports indicated that the Big 12 is in “deep discussions” to potentially add four Pac-12 teams to its ranks and as many as six, positioning itself for a world in which it could be an 18-team mega-league after Texas and OU formally defect to the SEC.

It seems far from a done deal even while acknowledging it is a real possibility — the report came the same day the Pac-12 self-reported it was (very prematurely) entering a negotiating phase for its next media rights deal — but this is a blog, right? Let’s just play a little game and pretend like it does happen.

Here’s what the map would look like, via Tulsa legend Bryan Metcalf. It is. . . messy. Very, very messy.

Adding the four Pac-12 teams that Dodd mentioned Tuesday — Arizona, Arizona State, Utah and Colorado — make a ton of geographical sense, obviously. With BYU already on the way it’d give the Big 12 a nice little western foot print. But holy smokes would Oregon and Washington change things. Just for context: Google Maps tells me the driving distance between incoming member UCF and potential incoming member Washington is . . . 46 hours. A cool 3,090 miles. I know UCF fans are crazy about their football, but lawd have mercy that is wild (and maybe prohibitive, we’ll see).

Of course, UCF is going to be disadvantaged regardless of whatever new additions — if any — the Big 12 makes in adding from the Pac-12 ranks. Being far on the east coast means the west coast additions in general aren’t convenient.

Convenience is out the door, though. This is all about survival. The Big 12 might need to make these additions to stay afloat. With the Big Ten adding UCLA and USC and the SEC adding Texas and Oklahoma, expansion may be the only route to combating the new super-league environment of college athletics. Here’s more from Dodd on that:

What the Big 12 cannot afford to do, according to multiple industry sources, is stand pat. There is still the lingering question of who even has leverage in adding teams between the Pac-12 and Big 12.

One industry source gave what was termed a slight lean to the Big 12 in being able to snatch teams from the other conference.

The difference in earning value between the Big 12 and Pac-12 would be “negligible” after this round of realignment, but in expanding, the Big 12 would at least be fortifying itself while diminishing the Pac-12.

By adding from the Pac-12 the Big 12 would not only be fortifying its standing in the market but also cutting a competitor, the Pac-12, at the knees. Win-win. Whether the Pac-12 is interested in folding is another matter entirely, but strength in numbers may be necessary, and the Big 12 seemingly has the high ground here over the Pac-12 which could be an inviting place of safety for a league now in disarray.