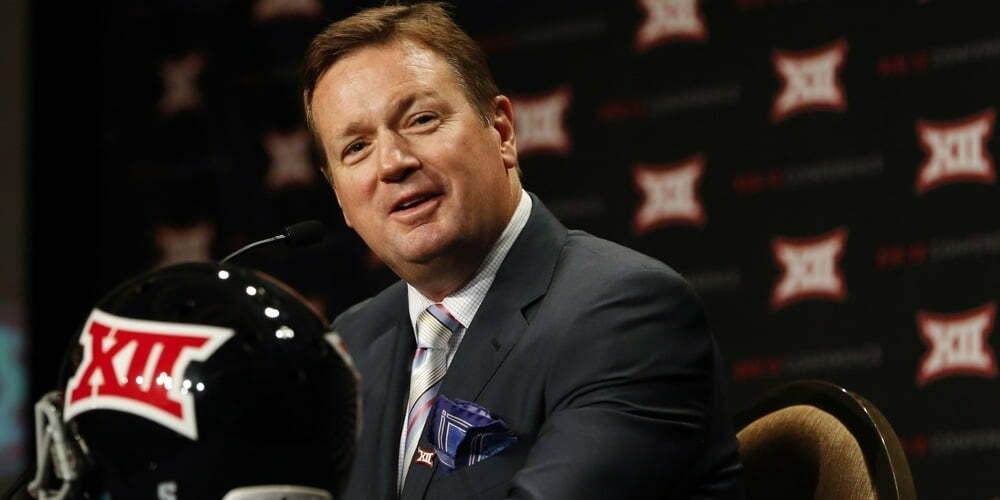 Big 12 media days (all media days, for that matter) always crack me up. The actors get up there and recite their lines and we always buy what they’re selling. Everybody is “excited” and “working hard” and really all of it is just a steaming pile of crap, Charlie!

With that, I’ve reformatted some of the things that were said at this year’s media days and broken it up into two parts.

What he said about DGB: “But as far as the process of him being a part of our team, through extensive conversations, first of all, I had a close relationship as did Coach (Jay) Norvell, our receiver coach, from recruiting Dorial personally as well as with his family.

And then through extensive conversations with the people at Missouri and our people, it was something that we felt the person that he is, the potential that he has as a young man and as an individual, that we felt the opportunity to give him a second chance at our place could serve him well.”

What he meant: “Dude, have you seen him run a deep slant in double coverage? Filthy.”

What he said about saying in the spring that Texas wasn’t close to a national title: “If you think about it, we were not a healthy football team at that time. But we still have some work to do. I can’t say just how far off we are and that we will not know that until we go compete this fall. But we still have work to do. Now, we’re not as bad as we used to be.”

What he meant: “Thanks, Mack.”

What he said: “And I learned some time ago, probably 30 some‑odd years ago, that I needed to do it a little differently. And my decision was, simply put, that be where you are. And I chose to do that. And that allowed me to become better at things I was doing and never looked to move on. It wasn’t significant to me.

I valued where I was, where my family was and doing what we were doing, and that was kind of the approach that I’ve taken.”

What he meant: I don’t have a translation. That’s just awesome life advice.

I obviously tried my hardest to be able to relay that to not only the players but the coaches and the administration and the fan base. And until we get through it for a couple of years, I knew it was going to be challenging.”

What he meant: “I already submitted my 2015 resume to be Washington’s offensive coordinator. I’m stoked about potentially living on a boat.”

What he said: “I think if you’re playing in our program, you know it’s one that’s passion-filled. It’s blue-collar. It’s hard work. It’s a program where we’re not afraid to wear our emotions on our shirt sleeve, and that kind of honesty is appreciated by our kids.”

What he meant: “I have zero athletes.”