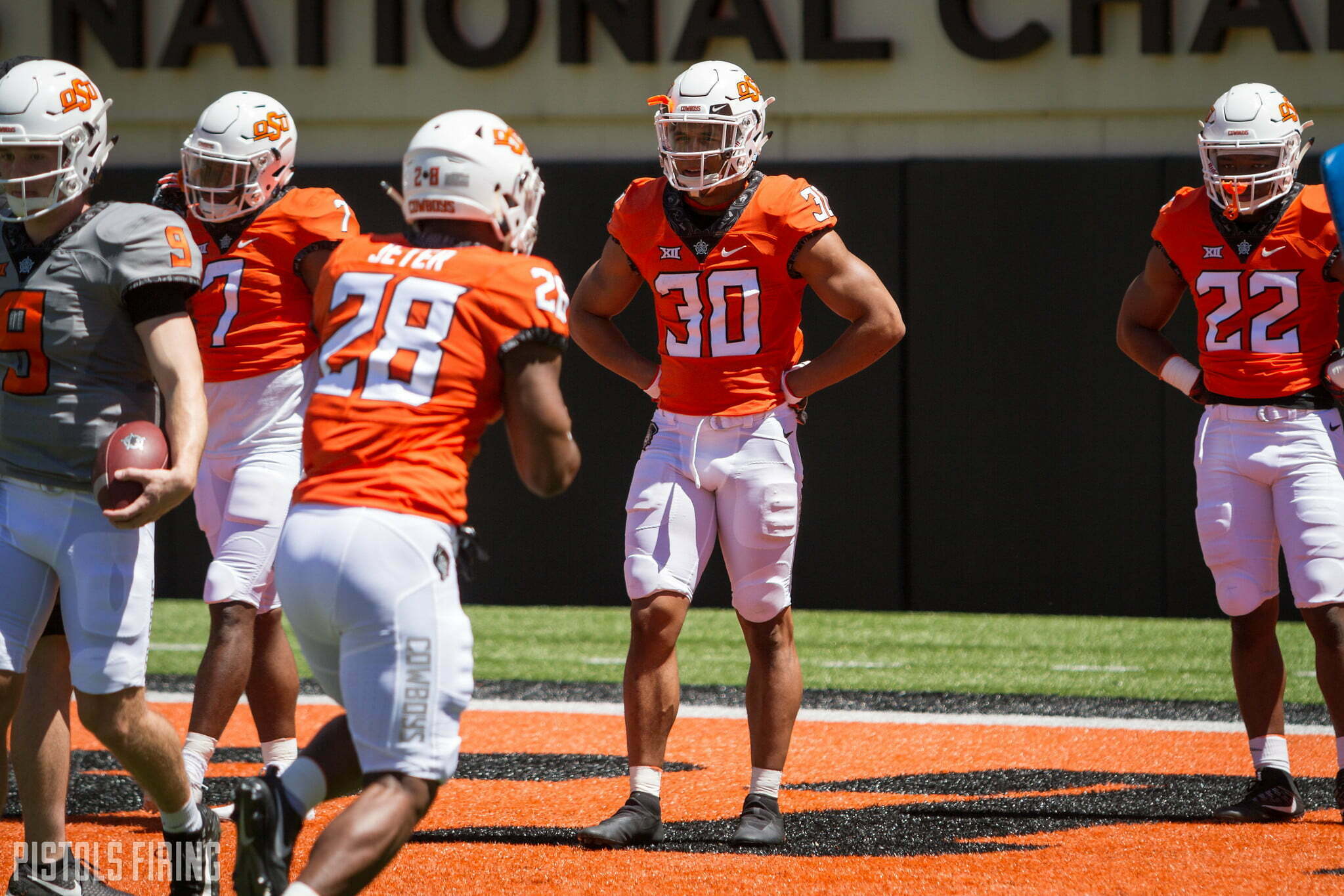 Lil Nas X might have the horses in the back, but Mike Gundy has some horses at running back.

I’ll be here all week.

When a group loses the likes of Justice Hill and J.D. King, it’d be easy for said group to go into a rebuild, but the Cowboys quickly reloaded. Chuba Hubbard and LD Brown remain and a redshirted Jahmyl Jeter and transfer Dezmon Jackson join them. The group will also add another stalwart in the fall, when Deondrick Glass gets to campus. Here are some things we learned about Oklahoma State’s backs this spring:

Chuba Hubbard Is the Guy

This is something we learned when Hill went down with injury in Bedlam, and Hubbard went on to run for 104 yards and three touchdowns. But, Hubbard being the main man has only been more solidified throughout the spring.

At the beginning of OSU’s 2018 season, Hubbard was competing with King and Brown to get snaps behind Hill. Hubbard came out of that battle well on top, finishing the year with 740 rushing yards, more than double of the other two combined. Without Hill and Taylor Cornelius, Hubbard will be the most veteran member of OSU’s backfield in 2019, in an OSU uniform anyway. With that comes expectations of leadership, something Gundy said Hubbard started developing at the end of last season.

“Overall, he had a really good spring,” Gundy said. “Chu’s in good shape. He’s in a good position right now to have a good year.

“He’s maturing now. I saw him start to mature and take things over in the bowl game. He needs to be a leader. I think he will. It’s easy to lead if you’re a good player and you have skill, players tend to follow you. I think his attitude will be really good. He was very quiet last year, and he’s somewhat coming out of his shell.”

A few weeks ago, Gundy was asked if Hubbard ranked among the best he has ever coached. After only one season, Gundy wasn’t ready to all in on that, but Hubbard definitely got off to a good start.

“He needs to do more,” Gundy said. “I like him. He’s got an edge; he plays with an edge. He seems to be durable. His football savvy is much further along than what I thought it would be coming from Canada. If he progresses and continues as he did the last few games of the year, he can get into that category. He just needs a few more street fights to know for sure that he can take care of himself.”

A key part of the Cowboys’ running back reload, Dezmon Jackson had a hamstring injury this spring that forced him to miss a few practices, but those around the program seem high on him with what they were able to see.

Jackson was able to participate in Saturday’s open practice, but with no tackling to the ground, it was difficult to tell just how good he will be for OSU in 2019. At Hutchinson Community College, Jackson ran for 1,216 yards and 13 touchdowns while averaging 7.5 yards a carry.

Even with all the depth on display Saturday, the Cowboys are still waiting on a running back to get to campus: four-star prospect Deondrick Glass.

A first-team Texas All-State selection, Glass ran for a combined 4,964 yards and 82 touchdowns the past three years at Katy High School. With how many solid backs OSU has and how tough the position can be for young players, one could think Glass wouldn’t be a day one contributor. But when talking about his running backs a few weeks ago, Gundy didn’t shy away from the prospect of playing Glass in the fall.

“Well, and we got the young kid coming in,” Gundy said. “If he’s in good shape, he’s got skill. Three weeks in August is all about durability and ‘Can I pick up the system?’ His skill set says if he can pick the system up and if he’s durable to make it through, he could play a role, too. If he is, you play him. You don’t really redshirt guys like that much anymore.”