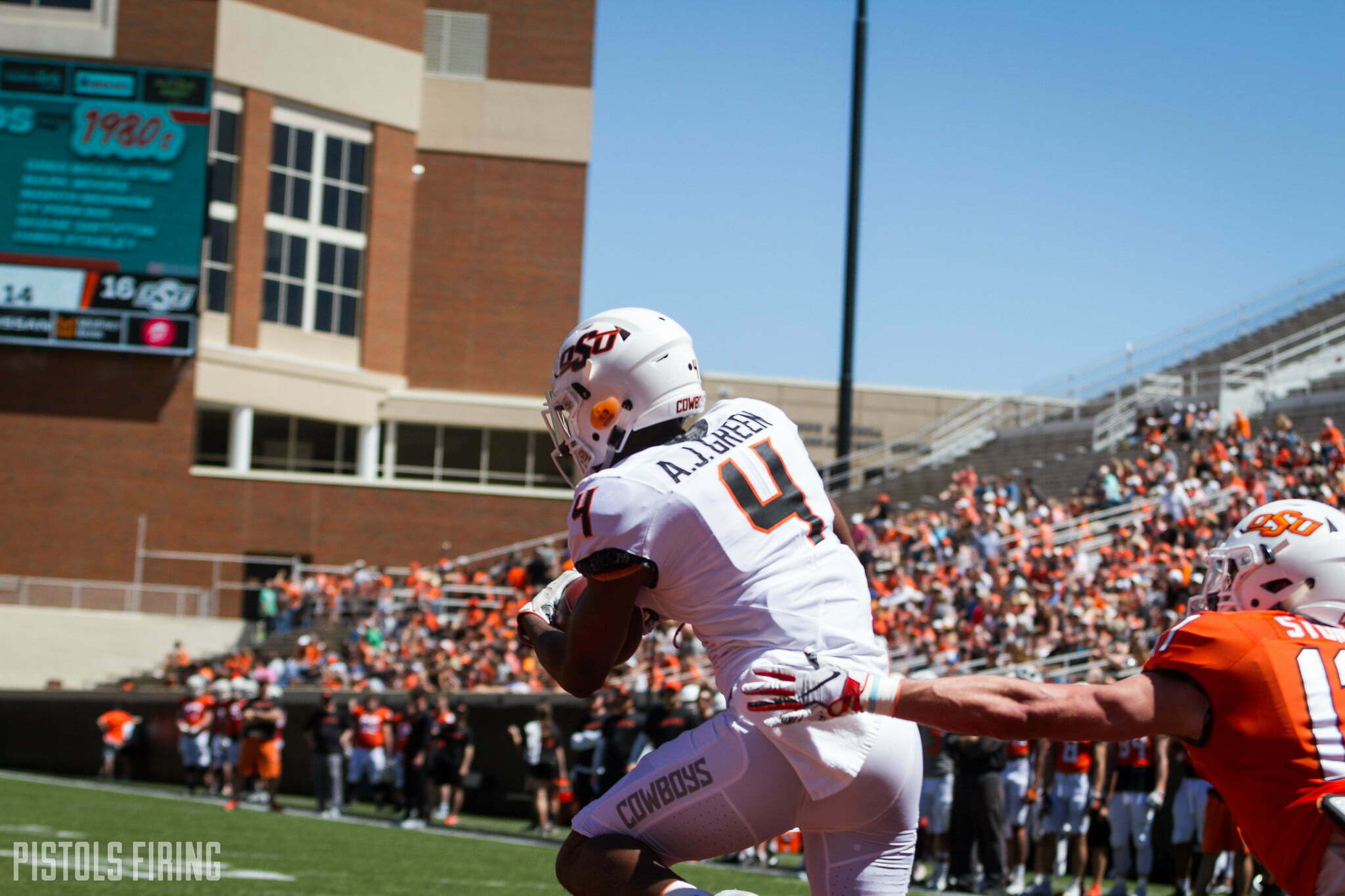 Playing in the secondary is probably the hardest place to be in the Big 12.

Oklahoma State had a young (but promising) group in the back half of its defense last season, and that group returned to the Cowboys’ spring practices a year wiser. Here is what we learned about the Cowboys’ secondary this spring.

The A.J. Green/Rodarius Williams corner duo were back for what was the pair’s final spring together (Green is a senior).

The two have been battling against the Big 12’s best receivers for the past two seasons, not only in games but in practices, matching up across from the likes of James Washington, Marcell Ateman and now Tylan Wallace. The two looked solid in the open practice, particularly Green. He picked off both Spencer Sanders and Dru Brown in the practice, with his interception against Brown coming in the end zone after a two-minute drill period.

Developing solid backup corners to give Green and Williams some relief was mentioned nearly every time Gundy talked about the position group this spring. The three Gundy name dropped the most were redshirt seniors Kemah Siverand and Bryce Balous and early enrollee Thomas Harper.

Siverand was the Cowboys’ third corner in 2018, and he played a hefty chunk of the Liberty Bowl after Williams was disqualified for targeting in the first quarter. Balous played special teams for the most part in 2018, and Harper was playing under Friday night’s lights just a few months ago.

Williams and Green will likely be the best they’ve been in 2019, having been through it so many times, but the interesting part between now and Aug. 30 is how ready the likes of Siverand, Balous and Harper can be if/when needed.

Safeties Benefit From a Year Of Experience, Still Young

Jim Knowles’ five defensive back defense asks a lot of its safeties, and the Cowboys were young there last season.

Malcolm Rodriguez, Jarrick Bernard and the newly hyphenated Kolby Harvell-Peel were tossed into almost certain danger in what was Rodriguez’s sophomore year and Bernard’s and Harvell-Peel’s true freshmen seasons. The group as a whole came out better for it, though. Despite the group still being young, those three have a combined 23 starts.

Tanner McCalister is a name that buzzed around a bit this spring as some depth at safety. OSU also has a string of redshirt freshmen who should be in a better spot to contribute this fall. Kanion Williams, Sean Michael Flanagan and Jason Taylor II all took advantage of the four-game redshirt rule in 2018, dipping their toes in the water of college football while still retaining their extra year. Tre Sterling also played in every game last season as a redshirt freshman.

Early in the spring, Gundy named dropped McCalister as a guy who didn’t play much last season, but impressed him to that point in the spring. Like Bernard and Harvell-Peel, McCalister enters 2019 as a true sophomore, as he played in all but one game last season.

“They’re better in our system now,” Gundy said. “Safety is not an easy position to play in this defense, so it takes experience. It takes reps to make sure you don’t get eye violated. Things like that. They continue to get better. We do a decent job with play-action here, so they really get tested. We’re further ahead (then we were last year), but we need a lot of work.”