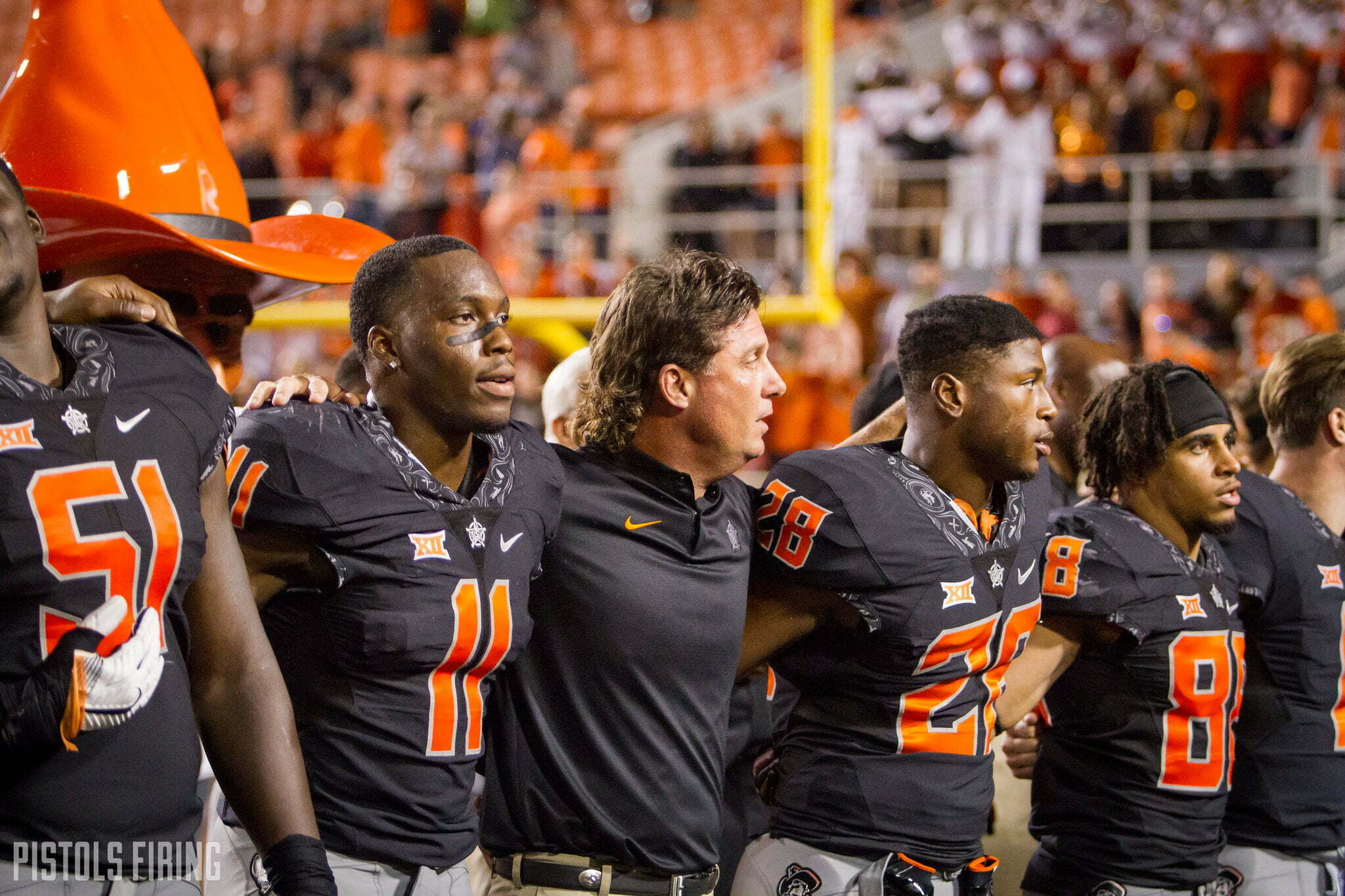 I swiped this idea from our pal, Helping Hand, in the Chamber — or he gave it to me, one or the other. Either way, it’s a good idea. It’s about why Michigan State’s future (starting right now with new head coach Mel Tucker) could be a facsimile for what we see in a post-Mike Gundy world in Stillwater.

Maybe that’s wrong. Maybe Michigan State and Oklahoma State are not similar programs. Maybe I’m overvaluing one and undervaluing the other. But in terms of success, recruiting, overall program resume and potential future success, there are much worse mirrors across the country.

Let’s look at how Mike Gundy and Mark Dantonio and the programs they have led over the last decade-plus stack up to one another.

Similar to OSU, Michigan State was good in the late 1980s (eight- and nine-win seasons, a Rose Bowl, a Gator Bowl). Unlike OSU, they were also decent in the 1990s, although not tremendous. Between 1990 and when Dantonio got there, MSU went to eight bowls but the best was the Citrus Bowl. They had just six winning seasons in those 17 years. OSU had four winning seasons in 15 years between 1990 and when Gundy got there in 2005.

Under Dantonio, Michigan State won a boatload of regular-season games (see below) and two outright Big Ten titles (but got obliterated in its lone CFP appearance).

The recent history (last 30-40 years) of both schools is remarkably similar. Dantonio was clearly coaching in a golden era of Michigan State football — the best there’s ever been — just like Gundy is.

Dantonio got to Michigan State in 2007, just after Gundy started at Oklahoma State. They won at exactly the same rate for the most part with MSU performing slightly better in the Big Ten than OSU has in the Big 12.

Just like OSU, Michigan State has made hay by recruiting in the 25-35 range and developing the hell out of its players. You’ll occasionally see them pop into the teens (unlike OSU) in the rankings, but traditionally they have been great by sitting at No. 30 or No. 33 year after year after year.

Like OSU, Michigan State had one big dog in their conference they could beat (8-5 against Michigan) and one they struggled to beat (3-8 against Ohio State).

This is where they differ. Michigan State — a Big Ten school about to be even more flush with cash then it already is — was in the top 15 in revenue, according to the most recent numbers we have. Oklahoma State was barely in the top 50. That’s a greater than $50 million difference, which is not a small thing.

So you can see why the hiring of Tucker from Colorado is so interesting to me. Does Michigan State fall back into 1990-2006 Michigan State, or has it gotten over whatever invisible hump there is in college football that you have to get over to become an elite program? Is Michigan State simply Michigan State now, or will it revert to its pre-Michigan State ways? Texas’ last decade would seem to provide some answers there.

And the coaching search seemed to be a bit of a mess. This why the way Gundy exits, whenever it happens, is so important. So vital to continuity in Stillwater. In retrospect, the way Bob Stoops and Lincoln Riley completed their baton hand-off was remarkable and a real testament to the leadership in charge in Norman.

I don’t think OSU’s leadership is necessarily less remarkable, but that handoff is going to be a big one. I’m curious to see how it goes, both for Michigan State as a test case for what not to do (or what to do) and then at some point in the future for Oklahoma State as it heads into a post-Gundy era that could play out in any way imaginable.