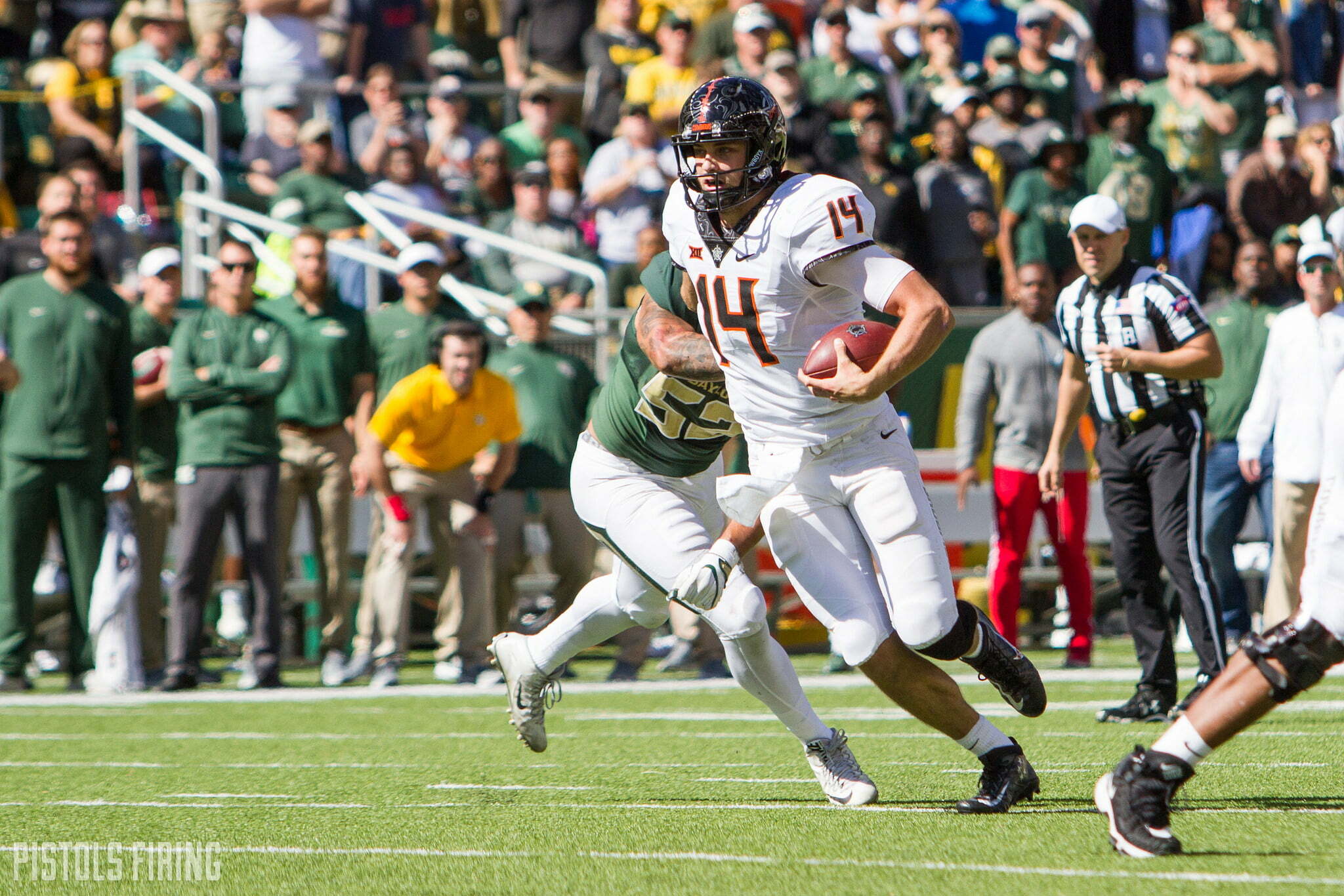 Mike Gundy isn’t one to tip his hand one way or another, but Monday during his weekly radio show with Dave Hunziker he indicated he won’t play another QB — not even in special packages — this weekend in Bedlam outside of Taylor Cornelius.

“It’s just not as productive, meaning that you have to share reps during the week,” said Gundy. “That’s the one thing I think the public doesn’t understand is: We only get so many reps to get guys ready to play, and there are a few new things that go in every week. Especially a quarterback like Taylor, who doesn’t have a lot of reps in his career anyway, you just say, ‘OK, we’re going to put another guy in there and share reps with him and let him go in and play a couple series in a game.’ That doesn’t give us the best chance to win.”

Cornelius is completing just 59.8 percent of his passes for OSU this season and has struggled at times consistently hitting receivers downfield. He did, however, have a 321-yard, three-touchdown showing in OSU’s upset of Texas two weeks ago. Overall it’s been up-and-down, leading to some fans clamoring for a change at the position.

Gundy, however, doesn’t have plans to change anytime soon.

“Taylor has played good, other than the Kansas State game,” he said. “The reason he’s gotten better the last couple weeks is because we’ve minimized what we’re doing, and he’s getting more reps on fewer plays. The ball is coming out of his hands pretty fast, he’s not holding the ball. So to say we’re going to share reps and give another guy a shot, unless there is a reason to do it, in my opinion, I just don’t think it’s beneficial.”

Gundy pointed to gusty winds in Waco for some inaccuracies against Baylor — “The wind was blowing 30 miles per hour” — for some of Corndog’s struggles this past weekend, and likened the scenario of switching quarterbacks to firing a CFO at a corporation.

“You have to be realistic as a coach, when you say, ‘OK, before we make a decision like this, we need to know that the decision we make is for the right reason and it’s better.’ If you had to make a change at the office, you’re working in the professional world and you say, ‘OK, I have some uncertainty about how we’re handling the financial part of our business.’ You better make sure if you hire a new CFO that he’s better than the one you have in there now or it doesn’t make sense to do it. You have to have a reason to do something like that, and that’s certainly not where we’re at with what Taylor has done right now.”

As I mentioned in the lead, Gundy is not one to tip his hand ahead of kickoff. He’d (probably) rather trim his mullet than leak out gameplan information. But his explainer on why there is no plan to replace Cornelius, or give another QB special packages in Bedlam, leads one to believe he’s either A.) Totally ruling out Dru Brown/Spencer Sanders or B.) Trying to make sure OU plans only for Cornelius and not for one of the backups.

You be the judge on which he’s trying to accomplish, but come Saturday, it seems it’d be a massive surprise if anyone other than No. 14 trotted out to start — and finish — OSU’s tilt against the Sooners.