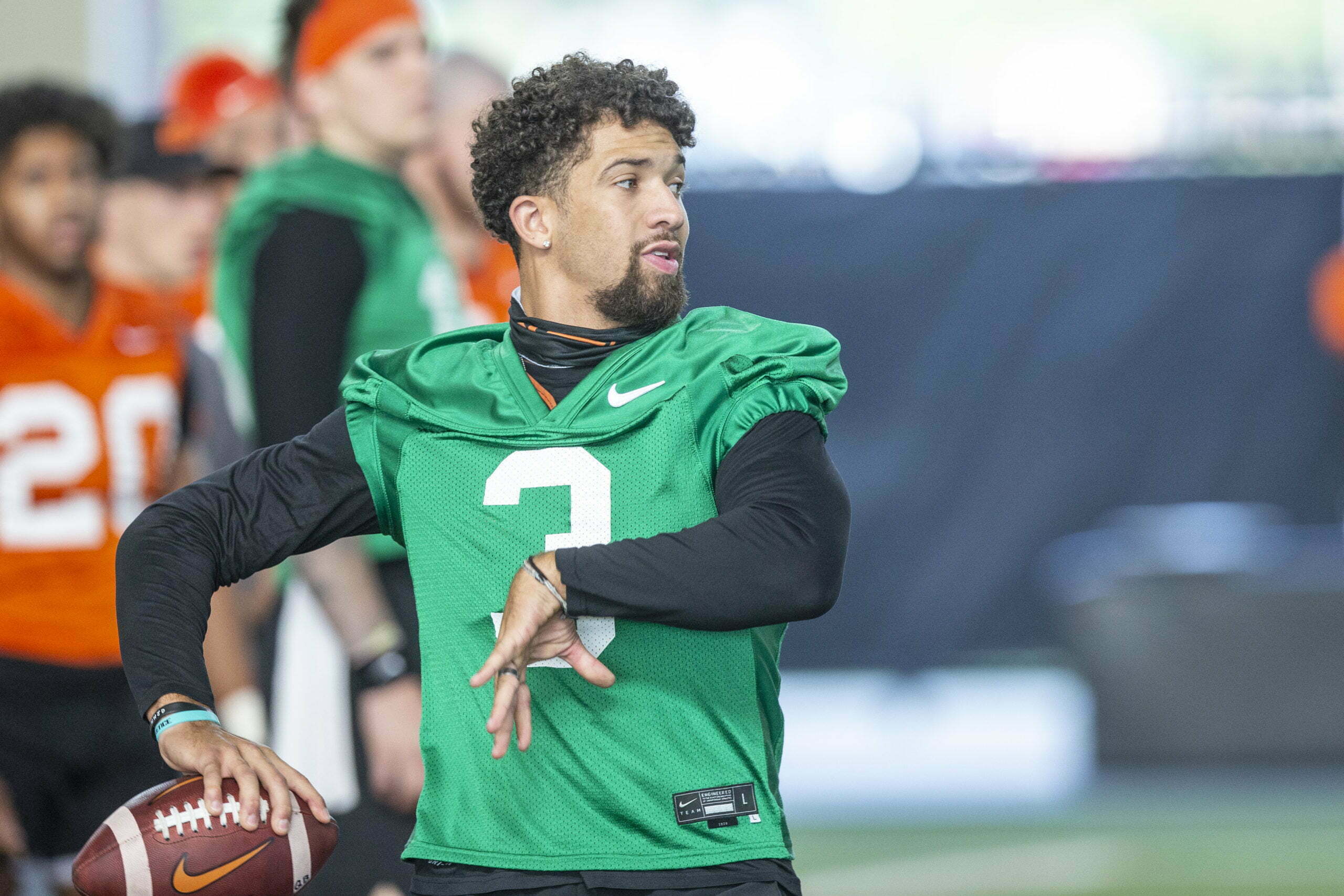 Ahead of Oklahoma State’s first spring football practice on Friday, head coach Mike Gundy addressed the state of his program and he seemed mighty confident, especially in his offense.

A big reason for Gundy’s gusto is Spencer Sanders, a returning third-year starting quarterback with all the physical skills you could ask for and a deeply competitive spirit. And Gundy says he’s only getting better.

“I think he made a lot of improvement in the spring,” said Gundy on Friday. “His awareness and understanding our offense, where to distribute the ball is very important.

“Guys that play quarterback in this system, we’ve had tremendous success with different types of players, and they have to understand our offense and know what their strengths are and know how to distribute the ball with the guys who can score points, and then have to take care of the football. That’s really important.”

Sanders has had his fair share of turnover issues and head-scratching moments — like many young QBs — but he showed improvement down the stretch in 2020 and has apparently grown by leaps and bounds since.

Gundy narrowed in on Sanders’ awareness in the pocket and those fumbles born from trying to do too much on a given play.

“Quarterbacks in our offense, sometimes they’re going to throw interceptions because we’re very aggressive,” Gundy said. “Taking care of the football in the pocket, making sure we don’t turn it over, that’s important for Spencer.

“You can go back over his last year and a half, and that’s where he got into trouble. If he takes care of the ball in the pocket, he’s automatically a better player.”

In 2019, Sanders dropped seven fumbles and lost five of them. In back-to-back games against Texas Tech and Baylor he lost two fumbles each. He also threw four interceptions during that span, a snapshot from a four-game stretch in which he threw eight picks and did not post a positive TD-to-INT finish in any single outing. But as his freshman season went on, he cleaned up the turnovers.

In 2020, he decreased that fumble count to five, losing three, and was less careless with the ball overall save for two lost fumbles in that frustrating loss to Texas.

Take out a botched handoff with Chuba Hubbard and a strip and you might point to that Texas game as the best of Sanders’ career. The Cowboys should have won despite the turnovers, and he posted a career-high 400 yards and four touchdowns against just one interception, making big play after big play.

So how do you turn down the aggression dial while still keeping that internal pilot light lit?

It’s important to understand that, like with any QB, Sanders’ issues with turnovers are more of a Venn diagram than a flowchart. There are overlapping variables.

A mix of weak protection, his internal tug-of-war between trying to do what’s best for this play vs. what’s best for the entire game and naturally-occurring in-game situations all overlap. The first two can be controlled to offset the latter which can’t.

The Cowboys’ offensive line struggled because of attrition and instability last season. Those greener trenchmen that got “their butts whipped” as Gundy said recently, aren’t quite so green this year, and OSU added a pair of linemen that should make an early impact in Caleb Etienne and Danny Godlevske.

As far as that internal struggle within Sanders, that will always be there when you know you’ve got the tools to carve up a #SCTop10 play on any snap. You want him to have that fire. He just needs to continue to sharpen his decision-making skills.

In four years, 2021 provided Sanders’ first full spring and offseason, and he’ll have a returning OC and quarterback coach for the first time since he came to OSU.

At Big 12 Media Days, Gundy lauded Sanders for making use of that newfound stability, saying he was “very impressed and excited about Spencer’s development.”

“My personal opinion is last year the spring ball that he missed and summer conditioning because of COVID set him back,” said Gundy. “And I feel like in the two months that we watched him over spring ball, he’s developed more than he has in two years.

“So, we’ll find out once the season starts. There’s never been a question with his toughness, his commitment, and his competitive nature.

Thanks to the NCAA’s COVID-19 eligibility rule, Sanders is in the rare position of being a fourth-year college football player with potentially three years of eligibility left. And there’s reason to believe that he can put all of the pieces together and make the most of it, starting in 2021.

As the Cowboys’ CEO has said, a team can go as far as its quarterback will take them. If Sanders continues on his current trajectory, that could be pretty far.