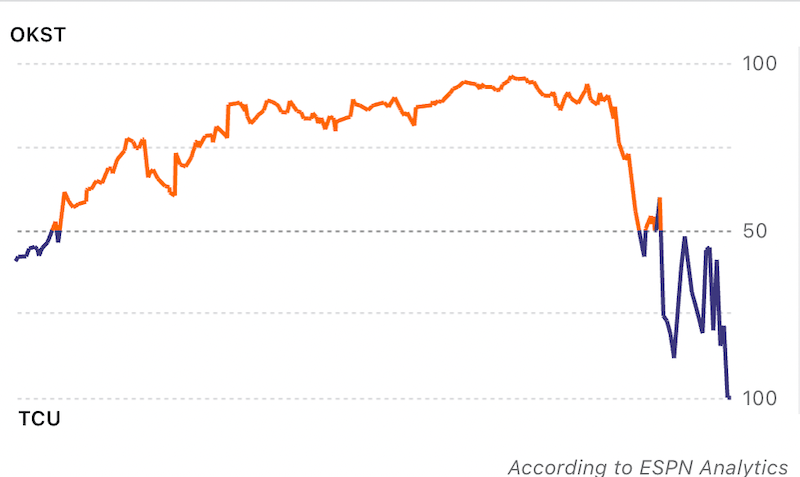 It’s Saturday night at time of typing, and TCU’s probability of a win, after, you know, winning, currently reads 100%.

But boy was OSU sure close to that same mark.

ESPN’s win probability metrics produced by ESPN analytics at one point had OSU with a 96.1% chance to win on the road Saturday in Fort Worth. That dropped just below 50% right before the end of regulation, bounced back at one point to 59.9% in the first overtime but it was all TCU from there.

Here’s a look at the chart, which reads a bit like if you put a heart monitor on me in the morning pre-coffee vs. post-coffee. The end is a really wild ride.

Here’s a little recap of the odds for those who might be interested. Not every score is denoted, just the ones that seemed to meaningfully impact the final result.

The win probability chart gave OSU a 61.5% chance of winning Saturday, the first time it was statistically more likely than not to win, after Spencer Sanders rushed for a 29-yard touchdown in the first quarter. Those odds rose to 77.4% after OSU scored again to go up 14-0.

A successful OSU drive stalled for OSU in the second quarter, leaving OSU to settle for a field goal. OSU made it to go up 17-7, but its win probability actually fell to 71.8%.

OSU opened up a commanding 17 point second quarter lead after Spencer Sanders and John Paul Richardson connected from 22 yards out to go up 24-7. OSU’s odds of winning jumped to 87.6%.

Settling for another field goal

Instead of converting a score and potentially taking a big enough lead it could sit on, OSU late in the third quarter had to settle for another field goal. The made field goal gave OSU a 30-16 advantage and moved its win probability to 93.7%.

TCU cut OSU’s lead to a single possession with a touchdown midway through the fourth quarter. OSU’s win probability remained in the high 80s — 87.2%. But its next score, which tied it at 30-30 and came with just a few minutes remaining in the fourth quarter, put OSU’s odds at around 57%.

TCU’s touchdown strike to Quentin Johnston in the first overtime boosted TCU’s lead to seven points and gave TCU a 75.5% likelihood of winning the game, according to ESPN’s win probability metrics. TCU was statistically favored thereafter.

Dominic Richardson’s punch-in at the goal line put TCU’s win chances of 51.7%. That was its lowest odds from then on.

Even after OSU scored first in double overtime with a field goal, TCU’s odds improved to 55.8% to win. That improved incrementally as it marched all the way down and eventually punched it in at the goal line for the game-winning touchdown.