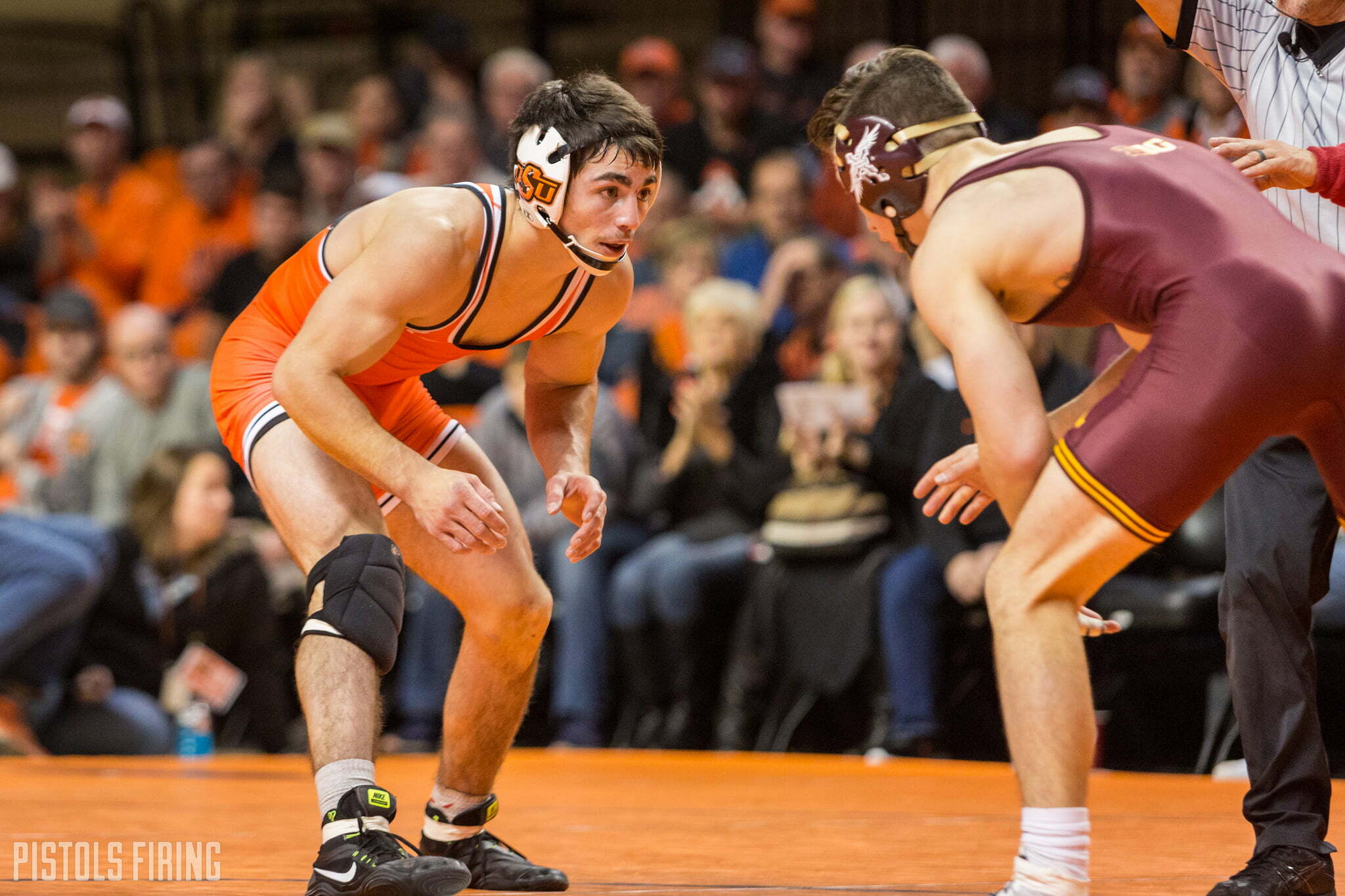 Wrestling season officially starts on Sunday so I thought I’d take to Twitter and answer some of your questions on the upcoming season. Let’s dig in.

Lance [email protected]: Is AJ going to wrestle this year? AND how does Daton get back in the mix? How are we going to replace Nick?

AJ is definitely wrestling this season and will likely be the starter for the Cowboys at 197. Buzz out of the room is he’s looking really good so far. We saw some of it at Junior Nationals a few weeks ago, but expectations are definitely high there. Could potentially be an instant NCAA title contender if he stays healthy.

I don’t know for certain how Fix’s USADA suspension will impact his folkstyle wrestling. Nothing has officially been announced, but the expectation is he will suspended until Feb. 10 in both freestyle and folkstyle, which would put him back just in time for the 8-man Cowboy Challenge tournament on Feb. 14 and for the final Bedlam dual on Feb. 21, along with the Big 12 and NCAA tournaments. Fix will actually also be wrestling at the Orange and Black match this Sunday. It will be an interesting season for him, but he should get at least a few matches in before the NCAA tournament.

Coach Smith said earlier this year that 125 will be decided between Reece Witcraft (cutting down from 133), Jakason Burks, and Trevor Mastrogiovanni. Orange and Black matches on Sunday will be really intriguing to watch and find out how that’s playing out.

Yes. He will be at 149 this year, but all signs point pretty strongly to Boo Lewallen getting the start there. With all the awkwardness of this season and COVID-19’s impact, he’s certain to see some time in the lineup this year. It could be a somewhat interesting match if we see those two at the Orange and Black match.

[email protected]: How will the lower weights shake out when Daton is back? Jakason, Trevor, and Reese seem to be fighting for one spot. Also, what about Taco vs Plott? How do you see that working out. We have a ton of talent who need to be in the lineup…having a hard time figuring out how

I talked a little about 125 above. The No. 2 guy in that group will likely move up to 133 and fill in there until Fix gets back in February and will just be backup at that point. The nice thing is that they could still see some mat time in the Cowboy Challenge Tournament and are all young guys with redshirts still available. With the NCAA not counting this year towards eligibility, whoever ends up in that role at 133 will at least get some matches to help develop them and won’t burn up a year.

Taco vs. Plott will be really interesting. Before all the chaos of COVID rule changes set in, it made a lot of lineup sense for Montalvo to cut down to 174 and Geer to go back down to 184. That would give OSU a really strong lineup and setup Plott to have a redshirt year and not really impact the overall lineup much. Now that everyone gets a year back, all bets are off. Whoever is best should get the start. So if Montalvo’s at 174 and beats Plott, he should be the guy. If Plott is beating Montalvo, he should be the guy. If either of them go to 84 and beat Geer, they should be the starter there. I really have no idea who is best in all that.

Plott was incredible during his junior year of high school, but was banged up most of his senior year. Montalvo improved consistently throughout last season and looked like an All-American candidate in March. Plott’s strength and speed are impressive, Montalvo’s gas tank is unmatched. It’s another potential match that should be very interesting to watch on Sunday.

Luke the [email protected]: Is Shawn Streck still a possibility to enroll 2nd semester or has that ship sailed?

Since these two tie in together a bit, I thought I’d lump them into one. I haven’t heard any additional news on Streck. Shawn Streck is a former Purdue heavyweight that attended NOC last year and was working on getting into and wrestling for OSU this season. I would assume since there hasn’t been anything come out about him, it’s unlikely that we see him this season.

Austin Harris was the guy last year and I would assume it’s his spot to lose at this point. On paper, Konner Doucet was the highest rated HWT recruit that OSU picked up last season and I would think could contend for the job possibly. HWT is a spot in the lineup that usually takes some development time though, so how ready he would be as a true freshman is tough to know.

Brad [email protected]: You giving updates from the ranking matches?

It’s a bit of a long story that I can’t completely share here, but I may or may not be in attendance on Sunday. Marshall Scott definitely will though and will keep everyone posted on how this goes.

Joe [email protected]: What are going to be the tightest ranking matches and what’s your prediction on those matches?

OSU put out a release Wednesday on ranking matches and it did not include all of the specific matchups. So there are quite a few variables that are somewhat unclear. Theoretically OSU could match up anyone vs. anyone and not really look at this as something to decide starting spots. So who knows what matchups we might see? Also there could be injuries, COVID, and other things that come into play for this.

But for ones that make the most sense and most expect to happen, here it goes. Also, I hate picking intersquad matches for guys I cover, so nothing personal to anyone that’s reading this.

Twenty-five is a bit of a cut for Witcraft, but if he’s managed to get down, I think this is the match to decide the 125 pound starter. Witcraft is so unique in his style that you feel like he could wrestle great and beat just about anyone but he also loses some matches you normally wouldn’t expect him to. I think the cut could get to him and if it becomes a factor and is hurting him, Mastro will take it. A healthy, Witcraft — who’s not hurting from cutting — could hit some big stuff and come out on top.

There are regular season duals that don’t get this good of matchups. Two All-Americans battling for the job, this should be great. There’s still so much unknown about Brock’s injury and recovery that this is a hard one to pick, but I’m going to take him in a close low scoring match over Hone. I do think Hone’s top game is solid though and if he can ride Brock, he could pull it out. This one should be great!

I think Montalvo has gotten down to 174 and him and Plott will be the match we see, but with COVID and other hurdles, I just don’t have some of the same access I normally do and don’t know for sure if he has.

That said, either one of these matches are great. I wrote a little about it above, but with Plott being hurt so much at the end of high school and not having much of a freestyle season, it’s just tough to know where he’s at.

Geer and Montalvo make a really interesting one as well. Experience, etc… I think might give the edge to Geer but would never count out Montalvo.

Already mentioned above, but are any freshman ready to unseat Harris? Will be interesting to watch.

That’s all I have for this one. Looking forward to another year and another season of covering the Cowboys with you all.