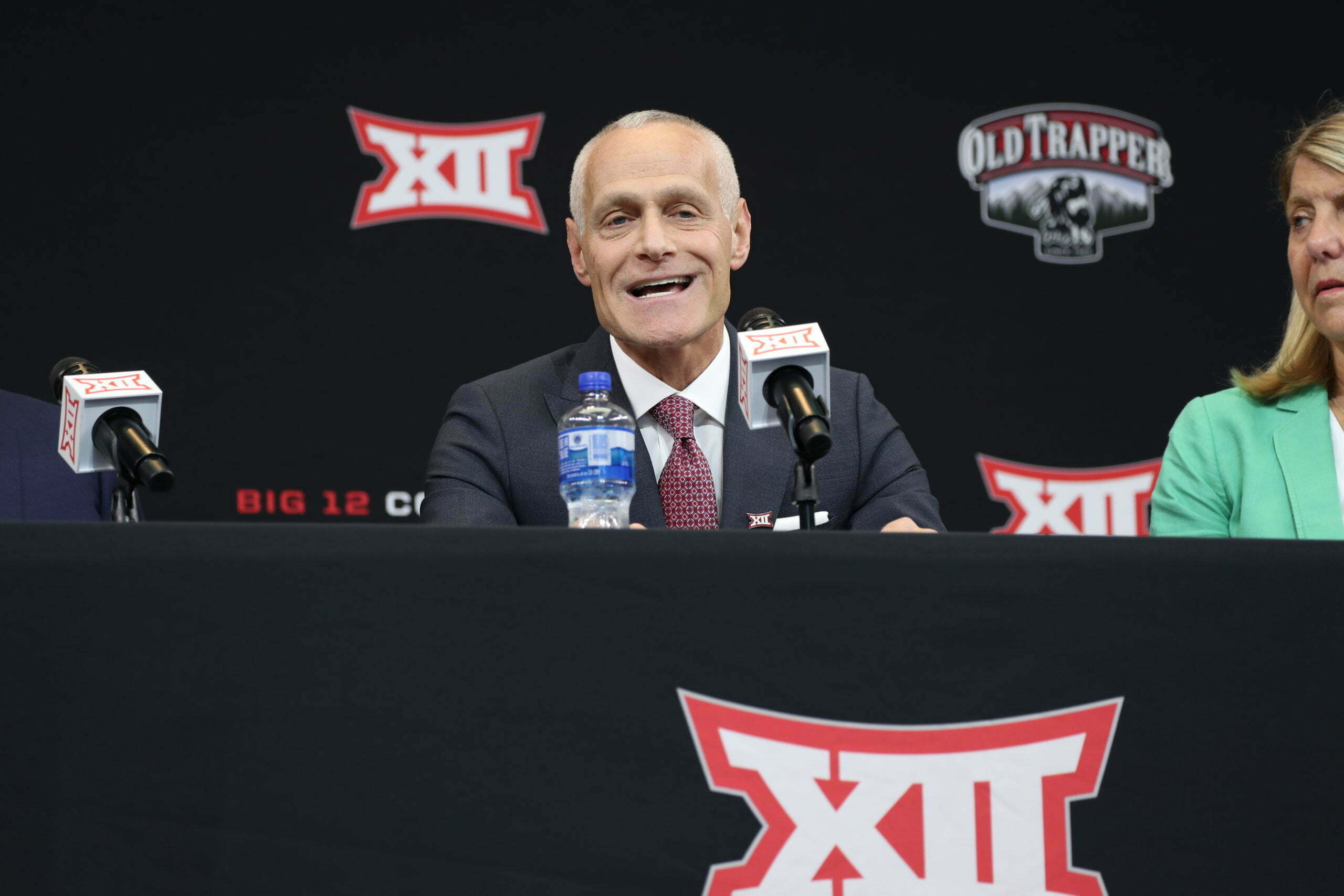 Yormark spoke publicly for the first time since being named the Big 12’s new commissioner at Big 12 Media Days on Wednesday morning in AT&T Stadium. He didn’t wait for questions about realignment (he got plenty), but in his opening remarks as a newly minted conference leader, Yormark got right to the topic of the summer.

“With the events of the last couple of weeks, conference composition is once again at the forefront of college athletics,” Yormark said. “As such, I have been very involved with the stakeholders both inside and outside the Big 12 regarding our path forward and opportunities to grow both the Big 12 brand and business.

“There is no doubt the Big 12 is open for business. We will leave no stone unturned to drive value for the conference. Just as I pledged to the board, we will be bold and humble, aggressive and thoughtful, and innovative and creative, all in an effort to position the conference in a way that not only grows the Big 12 brand and business but makes us a bit more contemporary.”

News of USC and UCLA leaving the Pac-12 for the Big Ten broke shortly after Yormark was named Big 12 commissioner. He doesn’t officially start his new gig until Aug. 1, but Yormark said the league will move as fast as it needs to to stay relevant in this newly shaped landscape.

“I’ve been actively engaged in realignment and appreciate the incredible input I have received from everyone throughout the conference,” Yormark said. “Exploration and optionality is at the forefront of what we are focused on. Anything considered must be additive and not dilutive.”

Since the Los Angeles breakaway, speculation has run rampant on the stability of the rest of the Pac-12. Reports have surfaced that the Big 12 has been in “deep discussions” with six Pac-12 schools: Oregon, Washington, Arizona State, Arizona, Colorado and Utah.

Of that group, the quartet of Arizona State, Arizona, Colorado and Utah seems more likely than Oregon and Washington. The geography works out with Colorado being a former Big 12 school. With BYU set to join the league, Utah would also be an intriguing option with the built in Holy War rivalry. And all of that addition west of Lubbock would make additions of Arizona State and Arizona geographically viable (if geography even matters anymore).

Yormark was asked specifically if the Big 12 was actively engaged in conversations with Utah, Arizona, Arizona State and Colorado.

“As I said in my opening comments, we are exploring all options, and we’re open for business,” Yormark said “Optionality is good, and we’re vetting through all of them.

“I think it’s fair to say I’ve received a lot of phone calls, a lot of interest. People understand the direction of the Big 12, and we’re exploring those levels of interest. Nothing is imminent, but we’re working hard to make sure that we position the Big 12 in the best possible way on a go-forward basis.”

The Big 12 officially announced Yormark as the conference’s fifth commissioner on June 29. One June 30, reports started leaking that UCLA and USC were leaving the Pac-12 for the Big Ten. It’s been a whirlwind of a few weeks, but Yormark said he sees this as an opportunity early in his tenure as a Power Five leader.

“I was excited about it in many respects because I saw there was opportunity,” Yormark said. “I figured I’d be thrown into it a little sooner than I had thought, and as [Baylor president] Linda (Livingstone) said, I’ve been working very closely with Bob (Bowlsby) and others on defining our path forward.

“I do look at it as an opportunity. As I said earlier, we’re going to vet out all the possibilities and options and determine where we go.”