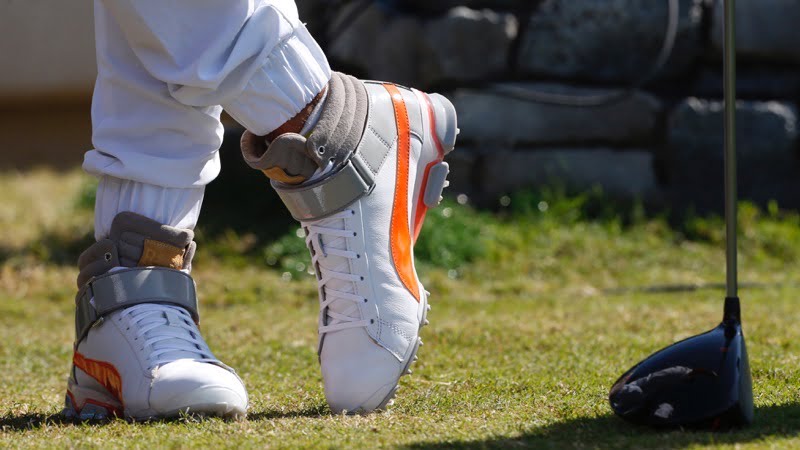 Rickie Fowler finished 20 under at the season-opening Tournament of Champions over the weekend in Hawaii. Pretty good, right? He got steamrolled by 10 strokes. Jordan Spieth was the culprit. Spieth became just the second golfer to ever finish 30 under or better in a 72-hole event.

“It’s just solid golf and I think you’re going to see a lot of that like he did last year,” said Fowler about getting drilled by the Texan. “You’re going to have to play a good solid golf tournament to have a chance to win.”

Fowler finished in fifth place which is a nice way to kick off the new year. He also had everyone buzzing about a new and unexpected fashion statement he made: high-top spikes with jogger pants.

“Each season we work closely with Rickie throughout the apparel and footwear development and design process to ensure we’re pushing the limits when it comes to both performance and style,” said Grant Knudson, Head of Footwear at Puma Golf. “During a recent meeting, Rickie expressed interest in wearing a high-top cleated shoe that could be worn with more progressive apparel (joggers style pants).” So there was that.

I honestly don’t hate them. I mean, I wouldn’t wear them and I don’t need Patrick Reed or J.B. Holmes wearing them, but Fowler can kind of pull it off. This is his wheelhouse. It doesn’t mean, as my parents pointed out, that Phil Mickelson isn’t going to talk Michael-Jordan-in-his-prime levels of trash to Fowler the next time they see each other, but I still don’t hate them.

Fowler will play next at the Farmer’s Insurance Open here in a few weeks.