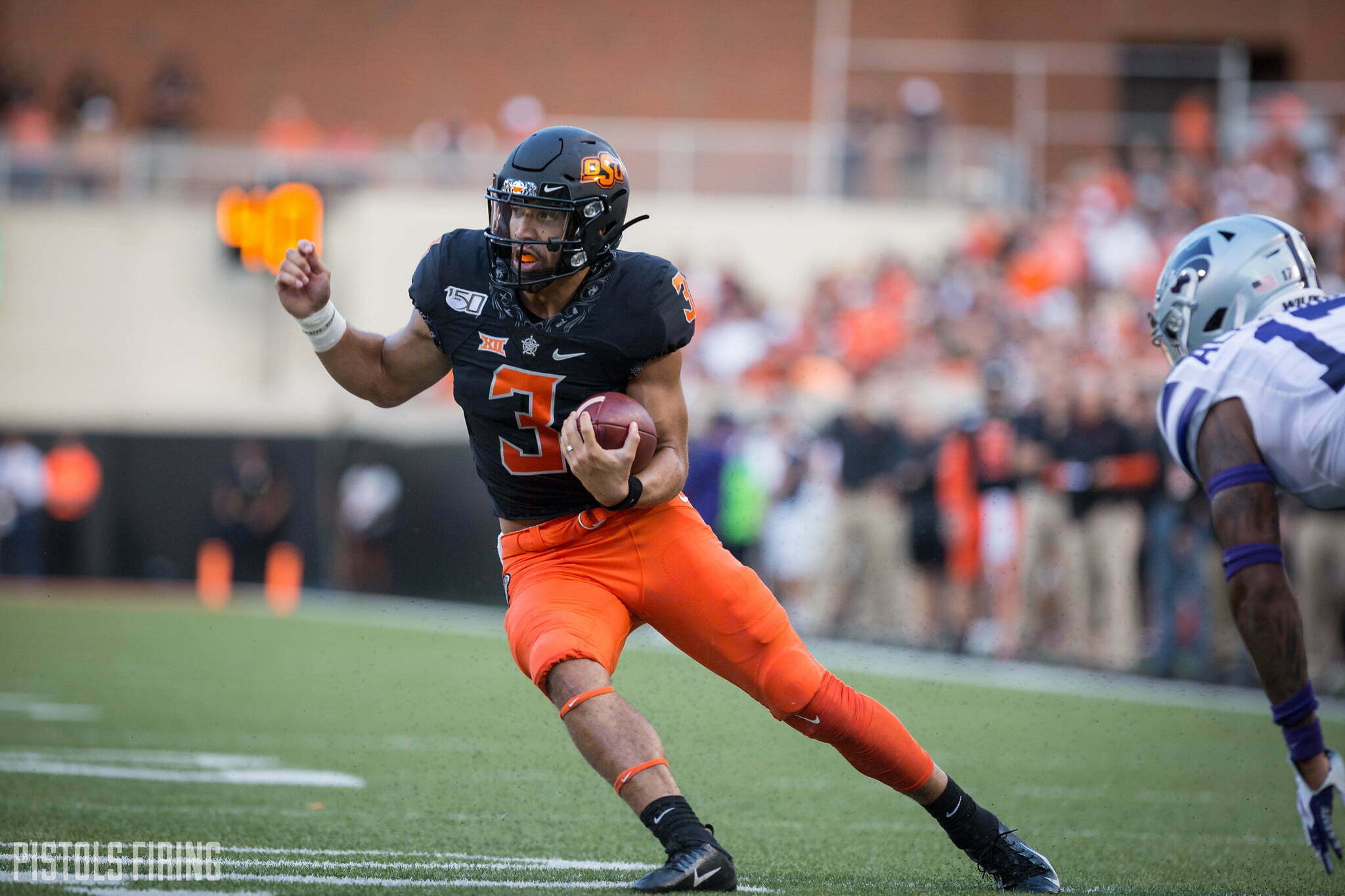 The first half of every football season always disappears. Poof, gone. It happens faster than it takes Chuba to hit the hole on a delayed cut. OSU is six games in this year, and I’m still thinking about a handful of things that happened in the Oregon State game on the last day of August.

Still, it’s time to ask a few questions about what we’ve seen and what we’re thinking. Some of these will be difficult to look at while others will be enjoyable to ponder. Some of them will actually have answers at the end of the next six (seven) games. Others won’t. Others may never have answers. Others may not be answered until 2020.

Regardless, it’s time to jump into 10 questions I have for the second half of Oklahoma State’s 2019 football season (in no particular order).

1. How good, really, is Spencer Sanders? This 2019 team will be defined by the first and last questions on this list. Everything else is extraneous. Sanders has been all over the map in terms of perception thus far, and following his Tebow-lite vow in Lubbock, I’m curious to see if he can settle into making the play that’s in front of him instead of trying to make the next three plays in one.

I think the gap between “wait, how many stars was he coming out high school” and “might be the best QB in the Big 12” is narrower than most people believe, but the bridge from one to the other is riddled with details and a discipline we haven’t yet seen. What’s in the bottom of the well? Who is he? Who’s he going to be? I’m still in the “he’s really special and will have a career that will make us laugh at that 5-TO Tech game” camp, but I want to see what he’s all about in the second half.

2. Does Tylan’s 2019 (and career) go in the pantheon? Is Tylan’s 2019 (and career) getting … a little lost? Project his current production out to the end of a 13-gamer, and it’s the fourth-best season in OSU history behind Blackmon’s sophomore year, Rashaun’s junior and Washington’s senior. Does it feel like the fourth-best season in OSU history? Tylan’s going to eject from Stillwater here in a few months, and my concern is that we won’t have truly grasped how elite his short stay there really was.

3. Can Chuba hit 2K? The #math would say it’s inevitable, but at some point the carries get reduced or he has 53 yards against a middling Big 12 team or his energy just wanes … right? He needs to average 129.4 yards the rest of the way, which seems like cake for somebody who’s currently blasting teams for 182.3 until you remember that only two other dudes nationally are even averaging 129.4. The mountain ahead is still arduous, but the 32nd 2,000-yard season in CFB history is certainly there for the taking. A kin to this question is: Will Chuba go to New York? If he hits 2K he has a real chance.

4. Do we see Sean Gleeson’s fingerprints? Ever? Do we know if Gleeson has fingerprints? Is Gundy putting the gloves on his hands before every game, or does he make Gleeson put them on himself? Listen, I think Gleeson is great. I really do. I think he’s smart and creative and progressive and confident in a way that is unique for a 34-year-old coach, but I also think he’s impressionable (who among us wouldn’t be?!) and that when the 51-year-old in the mullet says to hand it to the Canadian with the spats that Gleeson hands it to the Canadian with the spats. That’s not on Gleeson as much as it is his boss.

5. How is Bedlam going to go? I’d believe anything at this point. Really, anything. I’m sitting here not even knowing what to type after this because of how many different things I would believe. In the same way Bedlam shaped the Rudolph era during his freshman year, I think this year’s Bedlam has a chance to shape the Sanders era. If he pounds on Alex Grinch and OSU rolls a little in Stillwater, all of the previous sins are forgiven. If it goes like Texas Tech went, we have an all-out crisis on our hands. Such is life when you’re a little middling and this game means 3x what all the other games mean.

6. Does Bundage play in 2019? I promise we’re not keeping any information from you here. The reality is that everything surrounding Calvin Bundage’s 2019 season in Stillwater has been murkier than the water in Mike Gundy’s ponds. Would his presence make OSU’s defense better? A fairly lengthy body of work would suggest that, yes, this would be the case, but apparently what needs to align for him to actually suit up has not yet aligned.

7. Can OSU’s defense withstand a full conference slate? Have they been elite thus far? No. But all we’ve ever asked from OSU’s defense is that they be as good as the offense needs them to be. They’ve been that. The stat that won’t die in my head is that LSU gave up more points to Texas than OSU did. I know that’s a wild oversimplification here, but it’s also statistically true. They’ve given their offense a reasonable shot at 6-0 and the offense spit the bit along the way and let the whole thing grind to a halt. Can Jim Knowles’ side keep that consistency throughout the Big 12 schedule? I’m hopeful but dubious unless they figure out how to create some turnovers (or really, a turnover) along the way.

8. Do the Cowboy Backs ever get involved? You know what would be a nice safety valve for a freshman QB who’s gotten a little wild-eyed at times? How about a 6-foot-8 professional prospect to clear the middle of the field and hit a couple of seams. It’s unfortunate OSU doesn’t have somebody like that who could relieve a little pressure on No. 3. Hopefully they’ll recruit better to this position in the near future.

To me, the bigger question now that OSU’s mega-dark horse chances at playing for a Big 12 title in December have been all but vanquished, is where they end up in a bowl. Like Bedlam, I’d believe anything. If you told me OSU runs the non-Bedlam table, I wouldn’t blink. If you told me they finish 7-5, I also wouldn’t blink. That’s … fun? Thrilling? Terrifying? It’s something, I’m just not sure what yet.

Everything is on the table here.

10. What’s the temperature for 2020? This is a Gundy question more than anything. Fans are turning. Not all of them. Probably not most of them. Not me. But some are. It’s not a Texas Tech thing either. Fans are turning in a rational way after seeing a theme for a number of years that was simply validated by the Texas Tech L. In a reasonable way I haven’t seen before that isn’t reactionary or off the cuff and that I have no great response to. If the Gundy era is winding down (a monstrous if) then we’ll look back on this period of time as the general time it started. OSU is no longer great as a favorite. No longer seems like the second-best program in the conference. Nothing lasts forever.

Over the course of the last decade and a half, though, this is often when Gundy does his best work. Shocking that a snake hunter would thrive with his back against the wall, I know. I have no idea what the second half of the season has in store — maybe less of an idea now than I had two months ago — but answers to a lot of these questions are coming, whether we’re ready for them or not.