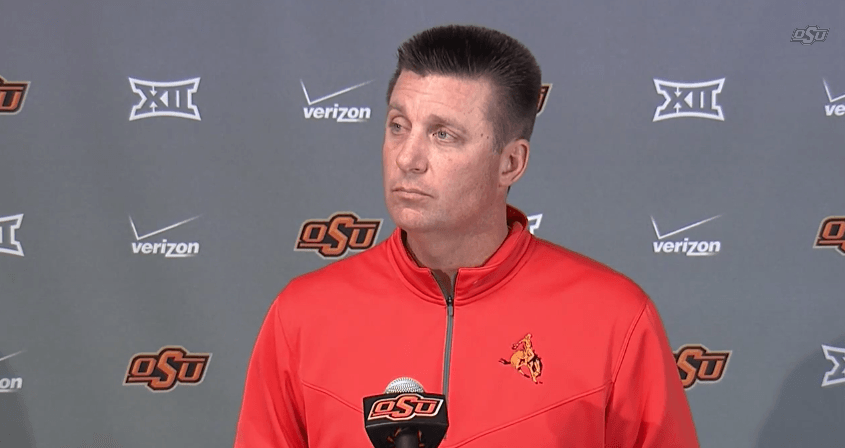 If you’ve been reading this blog for any amount of time you’ll know I don’t get too excited about recruiting or National Signing Day.

I totally understand that recruiting matters on a macro level (how could it not?) and special cases like Chris Carson can completely affect a program, but the minutia is exhausting to me.

Plus, I won’t even lay eyes on most of these guys again for another 24 months.

That being said….Kyle Boone has done a tremendous job covering the ins and outs of recruiting for this site in a coherent, enjoyable way.

He’s going to have a superlatives piece for you on Thursday but for now here are 10 random thoughts I had on National Signing Day.

Oh, and if you haven’t yet, you should check out Clint Davison’s recap of Mike Gundy’s NSD press conference on Wednesday morning. It’s very good.

1. Mike Gundy is out-of-his-mind excited (for him) about Jeff Carr

The Hooded One said Carr could be the “sleeper of the class” and legitimately seemed more excited about him than he was about Chris Carson.

Running back development under Gundy (especially of undersized dudes) has been immense and I’d love for Carr to be next in line.[1. He looks really small right now.] Here’s his highlight video:

2. Coaching has mattered more than recruiting lately in Stillwater

I mentioned above that recruiting definitely matters on a macro level but do you know what Oregon, Wisconsin, Oklahoma State and Stanford have in common?

They all outperform a standard their recruiting class rankings say they should be performing at. Impressive stuff.

3. Jemal Singleton made the best thing I saw today

This won the day for me and it wasn’t even that close.

4. The only people getting paid were software developers

Did you see some of the NSD sites schools had set up? OU must have hired away a handful of high-level Google engineers to do what they did for their site.

At the beginning of the day I thought OSU’s was pretty sharp but I walked away wondering wondering if they’d outsourced it as a Stillwater Middle School class project.

5. The 16 best types of recruiting fans

Nolan and I wrote this a few years ago and it definitely still applies (not sure why the title font is so big but sorry for that).

6. This is the most Glenn Spencer tweet ever[1. They kind of all are though, aren’t they?]

Very proud of new Cowboys. Now go back to class, train, stay humble. See you here in June where the recruiting entertainment is irrelevant.

I want to be recruited by Glenn Spencer. For anything, really.

The hysteria is real and it is not spectacular. Strangely, I found the hashtag Texas A&M and its recruits use (#WRTS) the most annoying thing I encountered.

It stands for “We Run This State” which is neither literally nor figuratively true. Greg Abbott, in fact, runs this state.

First, the thought of Mike Gundy (or whoever was typing on his Twitter account) trying to figure out how many “Ys” there are in Kevin Henry’s Twitter handle is quite humorous.

The gap between generations that are close together has never been wider or more easily seen than in the world of social media. While we’re here, Charlie has some piping takes.

Strong, in a direct repeat of what he said last August: "Social media will be the downfall of society."

Also, how confused will these freshmen be when Gundy starts calling them “ninety-four” and “twenty-two” in August? Coach, you knew my name in February!

9. All of the offensive lineman

He must have mis-spoke, yes? I mean, 18 linemen competing for spots? I know he likes to have an interchangeable two-deep but that’s crazy.

10. On John Kolar and Chris Carson

A couple of things came to mind. First, how easy is it to like a recruiting class when you already have a Mason Rudolph in the bag?

Also, what is the plan for Kolar? I get that OSU uses a lot of quarterbacks but he’s the No. 3 pocket passer in the country and he’s going to a black hole of a starting QB spot for the next few years at least.

Surely he’ll be redshirted so I guess theoretically he could be the starter as a junior and a senior (or sooner if this Rudolph thing goes well) but that’s a long time from now. He didn’t even sniff anywhere else. Also says he grew up an OU fan.

As for Carson — I don’t have much other than he’s going to be awesome and I’m glad there was no drama. There’s always drama…but there wasn’t with him. Gundy closed that one down and OSU has at least one piece of its backfield for 2015.

When asked about recruiting in the state of Texas, here’s what Gundy said..

OSU had one (ONE!) recruit from Oklahoma this time around (Kolar) and Gundy acted like he didn’t care at all.

I’m not sure if it’s more of a compliment to how much talent there is south of Oklahoma or and indictment of the development of kids in Oklahoma.