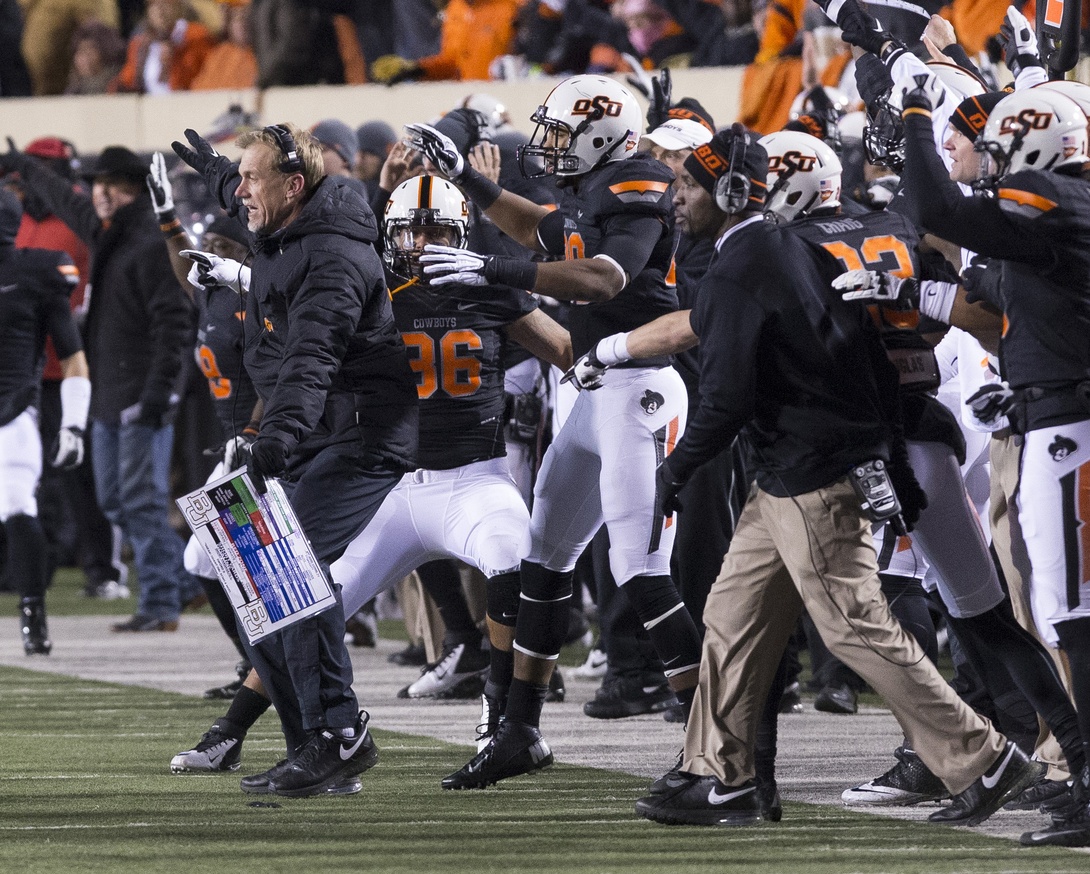 I did not see that coming. Who did, though? That was as dominating a performance as I’ve seen in the Mike Gundy era.[1. Along with the 2011 Bedlam game.] The elixir that led to OSU’s stranglehold on BCS No. 4 was as diverse as it was potent. Attacking on defense, nifty (yes) on offense, a crowd that wouldn’t quit, and an opposing QB who never found a rhythm.

It was as well as a team can hope to play against this excellent Baylor squad and the final score reflected it. Boone’s house flexed its muscles for the 17th time in 18 games and OSU set itself up for a Bedlam game that will provide a “yes” or a “no” to this question:

“Will OSU join OU and Nebraska as the only teams ever to win at least two Big 12 titles in three years?”

1. We’ll get to the defense in a second, it probably deserves its own 10 thoughts, but Clint Chelf, you certainly picked a fine time to play the best game of your career. Final line:

He started 11/11 and was throwing some seeds that would have raised Brandon Weeden’s eyebrows. I know this is probably a little bit of a misleading stat but we’re getting into “one of the winningest QBs in OSU history” territory now that he’s 9-2 as a starter.[1. He probably should be 10-1.]

Two things on his checklist: Beat OU and win a BCS game.

2. To the people who I see saying “see, same ol’ Baylor” — that’s sort of a disservice to 1.) Baylor and 2.) The way Oklahoma State played on defense tonight.

Baylor needs to average 50 a game over its last three games to set the all-time college football scoring record. As in they would have scored more points in a season than any team in college football history.

That’s probably going to happen, too. And tonight, OSU made them look like they were Iowa State. I mean, just look at this glorious drive chart:

Glenn Spencer getting it done. Improving his hops, too!

3. Gundy and Yurcich let ’em hang tonight on offense. Off the top of my head: there was a flea-flicker (out of a 2/3 diamond, no less), a WR pass (Moore2Moore), a throwback to Chelf from Stewart, and seven rushing attempts from our 415-pound fullback. That’s “yeah, Baylor might beat us but it’s going to take a Heisman performance from Bryce Petty for them to do it” mode. Here’s one of those plays:

Some of the swing passes and lateral runs are still a little iffy[1. Though I understand more of why OSU throws the swingers (as I call them) now after this post by Mark Travis even though Yurcich didn’t utilize what they’re made for — namely, running Chelf up the middle.] — at one point I believe Jeremy Smith was running so lateral he was nearly going backwards!

Overall I thought Yurcich did a good job of pulling plays from the playbook with the Budweiser box protecting it’s spine and not the one that just says “OSU plays.”

4. Speaking of Petty….he was as off as OSU needed to take hold of the game early. He did not look well on some of his throws and I know people are going to get on him for the trip at the one-yard-line but I think we’re kind of overlooking the fact that Boone could have hired snipers to spew invisible pellets at Baylor players from the top of the stadium. Not likely, but has to be considered.

Seriously though, at one point in the fourth quarter I genuinely wondered if Petty was concussed. His throws downfield were way off and on one fourth down run where he got smoked by LDJ he thought it was third down and tried to run another play before he was escorted off the field. On a day when he could have inserted himself into the Heisman frontrunner position, he didn’t even come close.

5. Two things I’ve noticed when watching Baylor this year. One, their receivers just run past people. I mean, I literally find myself saying “how?!” out loud when I watch them get over the top on a team’s safeties. But they consistently do it. And two, their line always, always provides Petty with enough time to hit said receivers.

Tonight was pretty much the opposite of that. Kevin Peterson (underrated defensive player of the year?), Justin Gilbert, Daytawion Lowe, and Tyler Patmon ran with those guys all night and the defensive ends were magnificent. It was just a masterful performance.

And not to overlook what Spencer does, I really feel like he knows when to pull the string on an offense. Bill Young kind of said “welp, these are my dudes, I think they’re better than everybody else, hope it works” and a lot of the time it did, but Young says that AND mixes up the disruption. He’s been unbelievable this year.

6. Do you think Art Briles still thinks this?

“We’ve been in some pretty good atmospheres so far this year, and we feel like Stillwater’s going to fall right in line with some of the things that we’ve lived through.”

I was so impressed with the crowd tonight. I (obviously) wasn’t there but I’ll let some people who were tell the story:

They are going to burn this place down. For warmth, mostly.

they're blasting New Sensation in Boone Pickens Stadium. You are excellent, OSU.

Gotta say that OSU is really impressive in that random gunfire and cannon shots scare NO ONE in this crowd.

That last one is so true.

The crowd brought it tonight, though. BPS is a complete nightmare when the students are feeling it and OSU gets a lead. The Baylor false start in the first quarter coming out of a timeout because of the noise kind of said it all. An elite performance by the first 60K crowd in school history.

By the way, I'm not sure if Baylor brought more fans to Stillwater than Lamar did

I don’t understand the whole “Baylor can’t even compete in Stillwater, much less win” thing more than anybody else (their last few performances there have been so far below what they average on the season that it’s almost a joke) but I would say the crowd had something to do with it tonight.

7. I feel like Kyle Stanley deserves his own thought. Partly because he is the scariest person to tackle OSU has had since Shawn Willis and partly because he had as many TDs in this game (2) as he had career rushes coming into this game (2). That is not a typo. He played it off like “no big deal,” too.

Kye Staley: "I joke with coach, I'm not a fullback I'm an OW: An offensive weapon." #okstate

He also now has three of his five career TDs against Baylor. Dude just lives to beat down Baylor.

8. Some more fun stats from tonight:

9. This one’s free: I “watched” the first half of this game from an airplane with WiFi which begs two questions. One, how incredible is it that we can have access to most things that have ever been written while flying 500 MPH in a metal machine through the air? The founding forefathers would have been like “deeerrrrr, wut?”

Second, how feasible is worldwide WiFi? Like, WiFi everywhere? I know they make those cards you can stick in your computer which I guess is what I’m talking about but I have a Mac and I don’t think they have them for Macs. I want the planet draped in WiFi — from Stillwater to Melbourne.

I know this poses more security threats than J.R. Smith at a Weezy concert but wouldn’t people pay an exorbitant monthly amount for this? Or at least enough people to make it worth the time of a private company. I have no idea what I’m talking about when it comes to the security of these things so I’m probably not even in the ballpark in terms of capability but I’d be all in on WWW (Worldwide WiFi).

10. What a week for Oklahoma State athletics. To recap:

11. Remember when we all had a giggle at Jerry Palm back in early October for continuing to ride Oklahoma State for the Fiesta Bowl in his bowl projections? Not that funny anymore. Somehow, and I’m still not totally sure how, OSU is playing OU in two weeks to go to its second Fiesta Bowl in three years.

Gundy may or may not have traveled to Manhattan this summer to be dusted with some of Bill Snyder’s magic but the man in the Silly Pete hoodie with the 14-inch straight-up hair has his team on the verge once again.[1. It’s weird to me that this team is two wins from being the only equivalent we have to the 2011 squad, but it’s just…different.]

Bedlam is always wonderful but this year, once again, just like 2011, it has a chance to be historic.

I just wish this week didn’t have to end.