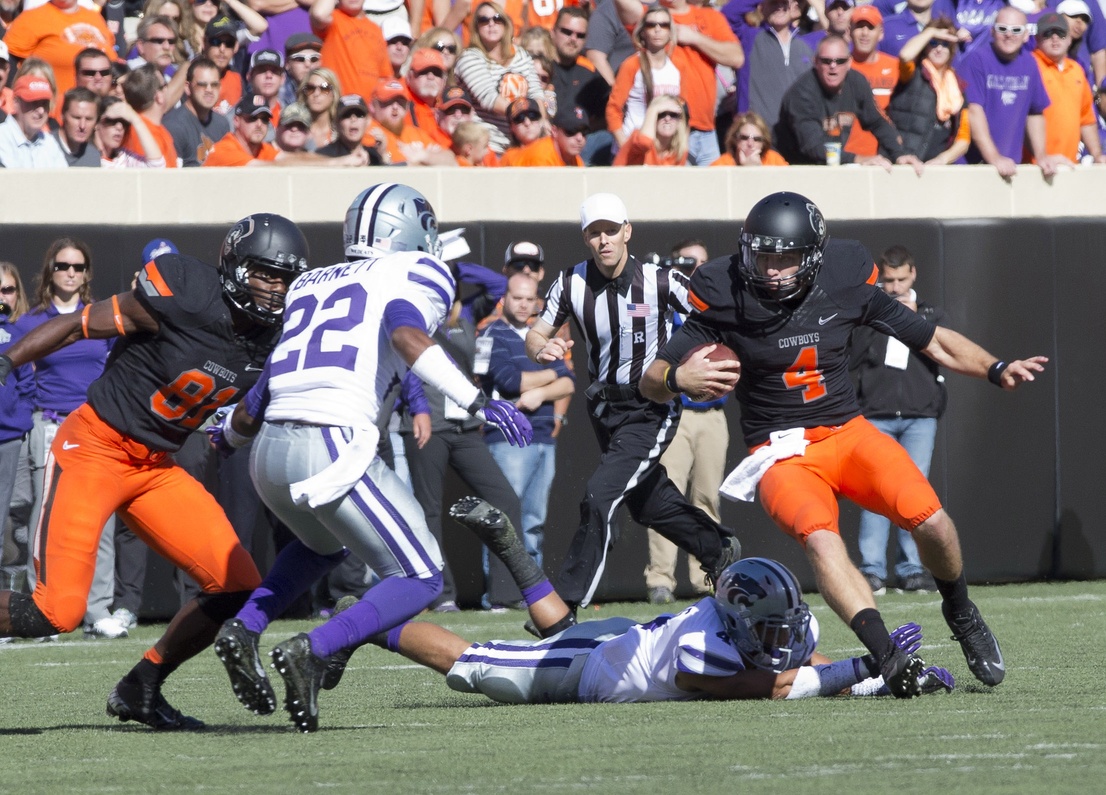 Not quite as satisfying as the 2011 thriller in Boone Pickens Stadium against K-State, was it?

Let’s jump right into the 10 thoughts…

1. First, a win is a win is a win[1. Unless it’s Bedlam, then it’s something bigger, usually.] but that wasn’t exactly the answer OSU fans wanted to the question “wait, is this team even close to as bad as it played at West Virginia?” The answer, apparently, is yes.

Kansas State turned it over five times (to your one) and had 12 penalties (to your one) and played the majority of the game without, by far, its best player and, finally, played a quarterback who had four passing attempts on the season and you beat that team by four points.

Is that something you’re excited about?

Because I am not.

2. I tweeted before JW’s game-winning drive that Gundy should go with Chelf for that drive.[1. Which, maybe I need to go back to hate-tweeting Walsh more often? He seems to play better like that.] OSU had zero first downs in the second half (through 24 minutes) and Walsh had looked just putrid throughout.

So naturally he rolled out there and went 75 yards in six plays and tossed the game-winner. I still think Gundy should have gone with Chelf there — the end result of a decision is not a good determinant of whether or not that decision was the right one — just because of how bad Walsh had looked for most of the second half.

I still think Walsh should be the starter but that leash is getting short, in my mind, not so much in Gundy’s.

3. Three other notes on Walsh: his receivers give him zero help. The ball to Stewart in the first half was the best ball I’ve ever seen him throw (it could pretty easily be the best ball he’s ever thrown in his life) and Stewart just made a mess of it.

On the flip side of that, I’ve never seen a QB at OSU consistently throw behind his targets like Walsh does. This, to me, is more disconcerting than his arm strength. He threw multiple balls today that could have easily been tipped and picked and one on the goal line that hid one of Kansas State’s defenders in the throat.

Also, if you don’t think teams are stacking the box on Walsh, go back and watch his third-down run right before OSU kicked the field goal to go up 34-31. There’s just zero respect for Walsh beating teams with his arm and that handcuffs Yurcich’s ability to call plays in a big way.

4. The worst part about these last two games is not how poorly OSU has played. The worst part is how poorly West Virginia and Kansas State — two of the five worst teams in the Big 12 (I think?) — have played and nearly defeated OSU twice. That should worry a team that has TCU, Texas, Tech, OU, and Baylor coming up.

5. Leaving Chelf in at the goal line today was interesting. Walsh had to come out for a play because his helmet popped off but Gundy left #10 out there for an extra play and let him throw it into the endzone. It was almost like Gundy wanted him to throw a strike TD and Wally Pipp Walsh.

My question is “what if he had thrown a TD?” Do you leave him out there for the next drive? Pull an Eddie Sutton and leave him out there until he makes one mistake (or perceived mistake)? Tell both of them to go to the locker room and just let Daxx go deep to Stewart over and over again until the game’s over?

I really wish Chelf would have tossed one for six because there would have been a lot of questions afterwards.

6. Gundy said this after the game:

Gonna probably disagree on that one, coach. Maybe two really average (maybe bad?) teams and it was sort of mandatory to watch. But fun? No.

7. With your season on the line with a four-point lead at home against a team that lost to a FCS team earlier this season, is this how you want your second-half drive chart to look?

8. Good comp for this game? How about the 2009 Mizzou game at home? OSU put up 351 yards of offense but picked Sunshine Gabbert three times (including a pick six). Zac threw one TD and Dan Bailey had four FGs. OSU scored 33 points.

Today: Walsh had one passing TD, Grogan had four FGs, and OSU intercepted Sams three times and scored 33 points. Eerie. And that game for OSU (they were ranked No. 16 at the time) wasn’t exactly a harbinger of future success. Went 4-3 the rest of the way.

10. The bottom line is that this is not a very good team — probably an average one, maybe above average at best. It’s going to have to win, like it did today, with a great defense (seriously, a really, really good defense), multiple turnovers, and good special teams.

That’s a bizarre thought as an OSU fan but it’s true. OSU’s ceiling continues to close in. Winning the Big 12 title, eight days ago they were the favorite, looks about 2,000 Brandon Weeden deep balls away right now. And if they continue to play like this offensively, they’ll be fighting to just somehow sneak into the Alamo Bowl.

OSU is 4-1 and will likely rise in the polls next week (LOL) but if you think this is anywhere close to a good team, you would, unfortunately for us all, be wildly incorrect.