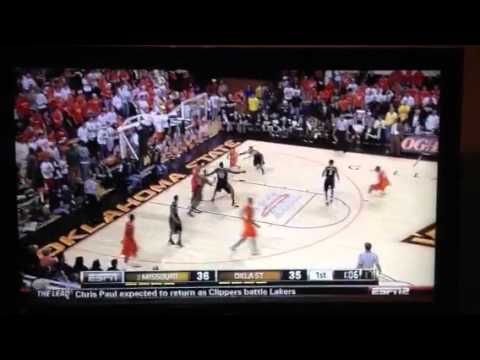 Tonight was the story of three freshman simultaneously playing the best games of their careers in the second biggest win of Travis Ford’s reign in Stillwater. Le’Bryan Nash will get the headlines (and the worldwide trend status on Twitter), but Brian Williams and Mike Cobbins deserve just as much credit for stunning #2 Mizzou in Gallagher-Iba on Wednesday night.

Cobbins was the most effective player on the floor all night, notching a 4-10-0-4-3 line that belies his true value and Williams spectacularly posted 22 points, four bords, and a dime.

OSU put together probably the best half of hoops they’ve played all season and led Frank Haith’s team 37-36 going into the break. Then they started reeling to begin the second half as most expected them to after Mizzou’s poor first half effort. The Tigers went on a little 19-10 run before the 12-minute media timeout.

Then things got weird. This is usually the part of the game where the better team (in this case, Mizzou) pulls away and we all tweet things like “we’re so young!”, “I’m excited about year two of Le’Bryan!”, and “do you think Keiton will end up in Israel or Poland??”

But Nash hit a couple of lay-ups coming out of the break, Markel HAMMERED on Flip Pressey (I’m still freaking out abou this), Nash took over with a couple of heat check threes, and Brian Williams delivered the knockout blow on an alley-oop.

It was very…unlike anything we’ve seen from this Cowboys team all year and very much what we thought we were going to see when Travis Ford autographed that $20 million piece of paper.

And it was quite the ending to a night that started out rather conspicuously with Bry Bry tweeting at fans 50 minutes before the game started about what they should be wearing. I ripped him for it (which I stand by) but hey if that’s what it takes for him to play like this then maybe Ford should just replace Soucek on the bench with one of these babies because he was everything we dreamed he would be the day he committed to the Cowboys last year. Maybe more.

He was feeling the crowd too. That’s one thing I’ve always appreciated about him, despite the scrutiny and the microscope, he’s always maintained his reverence for Gallagher and the university. And the 13,000-seat gym rewarded him handsomely tonight.

The last ten minutes of this game felt like a turning point for the protagonist in this lengthy narrative. Problem for me is that I’m way too emotionally invested in this thing to tell if that’s really what they were or if this was just a sharp uptick in the precipitous demise of Travis Ford’s ship-steering skills.

The next four outings (at A&M, at Tech, Baylor at home, and Iowa State at home) will be more than telling though. Win three of those playing like this and you’ve got everybody hooked up again. Lose three and Mizzou will be a distant memory.

Tonight though, let’s all just enjoy this one.

Here are ten more thoughts from a great night in Stillwater:

1. I’ve been campaigning for Markel at the one pretty hard for the last week, but if he’s just going to pull up from 18 feet after beating his guy off the dribble, I’m going to have to rethink some things. On the other hand, Keiton isn’t creating enough space to make passes like the one below…

2. In retrospect, Missouri was actually a pretty good matchup for OSU. They aren’t big so they can’t beat you inside and OSU outplayed them for most of the game at the positions Missouri usually excels at.

3. This is the second game in the last eight days that I’ve found myself asking: “wait, do we actually have something to work with here?” The Travis Ford bandwagon is presumably being steered by a 16-year old student because the ride is a bumpy one, but I haven’t bailed yet…even if I am hanging on with one hand and trying to find the Gottlieb/Self/Thompson bandwagons across the way.

4. One thing I’ve noticed, a big difference between Nash and Brian Williams is that Williams, though not as physically imposing, does a great job of using and controlling his body to draw fouls. Nash definitely has a better body but he hasn’t figured out how to use it to his advantage and settles for way too many jumpers. Of course when he hits 12-18 and 3-4 from three, who cares how he uses it.

5. I didn’t mention it above, but Jurick was outstanding tonight with six (!) points, eight boards, two assists, and a block. All in only 24 minutes as well. If you can get eight points, 16 boards, a pair of dimes, four steals, and four blocks combined from him and Cobbins, well that plays in a bad Big 12 this year.

6. It just doesn’t make sense to my rudimentary brain how Keiton Page can ever beat Flip Pressey off the dribble for a pull up J like he did at the end of the first half and again at the end of the second half (and worse, much worse). I mean we’re talking about Keiton Page and FLIP PRESSEY.

7. Nolan and I were talking this morning about how OSU always wins one game a year in Gallagher that they shouldn’t. I thought before conference started that they’d win one of the six against KU, Missouri, and Baylor. Hopefully this one is the catalyst for at least one more (yes, I’m getting greedy). Also, forget I ever said this.

8. It’s scary that Ricardo Ratliffe went 10-17 from the field and saw his field goal percentage fall. He came in shooting 80% (EIGHTY PERCENT!) from the field.

9. I found it ironic, and a bit sad that LeBryan was spending 140 characters at a time an hour before the game trying to coordinate the fan color scheme and then 1.) nobody showed up and 2.) the players and cheerleaders came out in gray t-shirts.

10. For those who were watching on ESPN2: I know he’s nerdy but I’m a big Jon Sciambi fan. He seems like he loves hoops and genuinely just loves calling sporting events. If you’re above average, I can always get behind somebody like that.

Next game: at Texas A&M on Saturday