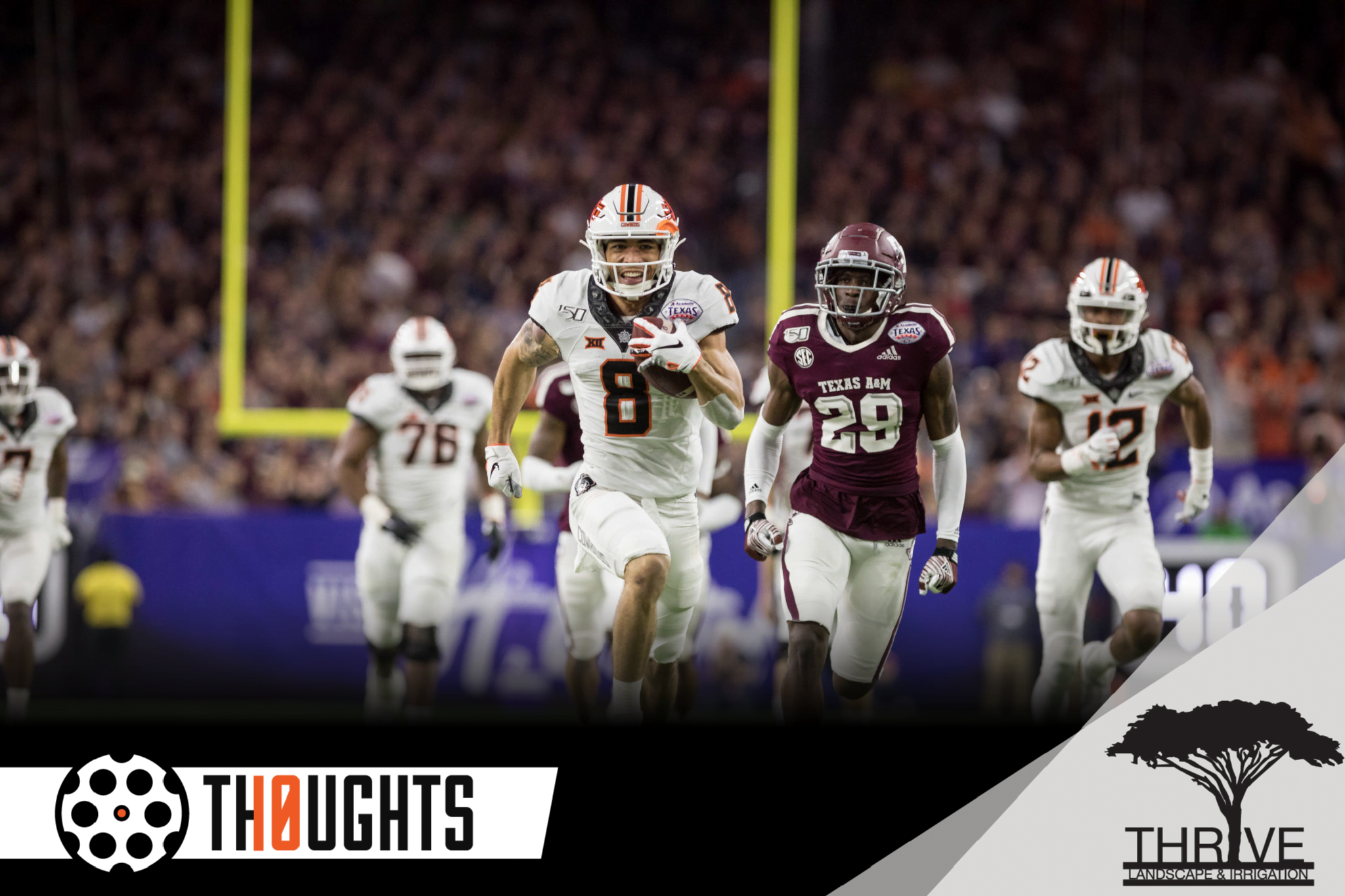 HOUSTON, Texas — Oklahoma State got out to an early 14-0 lead against Texas A&M in the Texas Bowl on Friday but faltered late as the Aggies scored the next 24 points and won 24-21 to send OSU home with an 8-5 record for the 2019 season.

Chuba Hubbard was an unsurprising star for the Pokes as he put up 158 yards on 19 carries and notched just the 32nd season of 2,000 rushing yards in college football history. Braydon Johnson on the other hand was a surprising star for OSU as he grabbed 5 receptions for 124 yards and a pair of touchdowns.

We have many things to get to on this game, but first a big thanks to our friends at Thrive Landscape and Irrigation. They’ve sponsored our 10 thoughts all season, and if you live in the Stillwater area you should check them out for any landscaping needs you might have.

I believe those were the same words I typed 17 weeks ago when the season started on a Friday evening in Corvallis. Nothing has changed. Stating the facts — 158 on 19 carries and 15 more on 2 catches — belies how breathtaking he is and how much OSU leans on him. He again had over half of OSU’s 334 offensive yards, and against a Texas A&M defense that gave up 97 rushing yards to Georgia and just 128 to LSU, Chuba put 158 on them. On 19 carries.

But I would have loved to have seen him on one of the elite OSU teams of years gone by. He won’t stay (right??) … but man, it’s intoxicating to think the thing I definitely shouldn’t think: What if he does?

Oklahoma State has had a No. 3 WR (if we’re talking about elite offenses) masquerading as a No. 2 (and at times No. 1) guy for the last year or so, and doing a good enough job that it didn’t matter as much as it could have.

I’ve been screaming at anyone who will listen about Braydon Johnson for the majority of this season, and he finally had his big breakout game. In a game where I was told the SEC had superior speed, Johnson and Chuba looked like the fastest guys on the field for most of the night.

The thing about Johnson is how terrifying he is as a big-play threat. He had just 21 catches on the season, but they went for 23 yards a pop, which is an astronomical number for an offense that isn’t exactly its former self when it comes to throwing deep balls to its best playmakers.

I don’t know what OSU’s offense is going to be in 2020 — or even who’s going to be pulling the levers — but I do know that with the way No. 8 finished this season, he’s going to be more prominently featured than ever going forward and that now, a three-headed group of Tylan, Braydon and Stoner (in his 257th year of college) is all the weaponry a dual-threat QB could ask for in Big 12 play.

For the sixth straight game, OSU’s defense held its opponent well below their season scoring average coming into the game. Here are the numbers.

It wasn’t a perfect game, but 2.4 points per drive (I’m tossing out both of A&M’s end-of-half drives) with a pair of turnovers should be enough for a halfway-decent offense to seal the deal. (Spoiler: it wasn’t).

What happened? It felt like OSU tried to out-Wisconsin a team that desperately wants to be the Wisconsin of the SEC. Take the 4th-and-1 when they rolled Sanders out there and lined up in a set that would have made Navy’s offensive coordinator giddy with glee.

A&M and teams like A&M are built to play between the hashes, and as the game rolls on that’s not the place to try and exploit them like OSU seemingly tried in multiple spots late. Possibly related: OSU had five (!) drives that went for 3 yards or fewer.

This has been pointed out by multiple people, but sometimes I think it’s easy to gloss over for whatever reason. Three of OSU’s five (?) best guys — Sanders, Tylan and Kolby Harvell-Peel — played a total of two plays in this game. Chuba could be the No. 1 pick in the draft and have rushed for 21,000 yards this season, but if you take away three of any team’s five best guys, they aren’t going to be what you’ve come to expect, especially when two of those guys are offensive playmakers. That’s not an excuse as much as it is a reality, and when you aren’t loaded up with talent, things start to get a little tougher for you more quickly than a program that recruits better to the two-deep.

That’s a thought I had many times throughout the second half. I felt like I was watching two teams that couldn’t field a combined team that would stay within three TDs of LSU. In some ways I think maybe that’s a microcosm for how a lot of OSU fans feel about the state of the Pokes and the program in general. Is what we’re watching fun? Is there hope for next season? Is this just what it’s going to be for the near future? Can you say with a straight face that OSU is going into 2020 and 2021 with a real shot at winning a conference crown? (More on this in thought No. 10).

In the same way that everyone — including Gundy (see below) — felt the game turning toward Texas A&M, you can feel the lack of momentum both on and off the field right now for OSU. Maybe that’s overstating where things are at based on the emotion of a single game — and of course all of it changes with a single joint presser with Tylan and Chuba at the mic — but also, you know, maybe it’s not.

Mike Gundy: Good game. Wish we would have made more plays in the fourth quarter. They started to wear us down on both sides of the ball late in the game.

I thought OSU traveled pretty well to this game, made a lot of noise and was generally into the entire thing … and they were completely drowned by the A&M side. I was staggered at how many Ags were at this game and how loud they were throughout. I don’t know that it materially affected the outcome — although it did feel a little like Kyle Field South late — but it was definitely a reminder that OSU as a program is outpacing its resources. That’s not to say there aren’t five or nine or 33 things it could be doing better, but it’s definitely eye-opening to see it that close up.

I believe we may have been … misled as it relates to Sanders. That’s not shocking I guess, but he definitely did not look like he was good to go for any extended period of time, and all four of my kids — including the 4-month old! — could have told you that OSU was rushing it when he came in the game.

As for Brown … it is what it is. Good backup, not a starter on a good team. I thought he scraped his ceiling at this level against one bad team, one decent team and one really good team in his time as a starter.

Also, he may have hit the biggest gap between thinking “this is definitely getting me on SC Top 10” and how things actually turned out in the history of bowl games with this flying leap (?) for a TD in the first half.

If I would have told you that Braydon Johnson would have 124 yards, A&M would turn it over twice and OSU wouldn’t turn it over a single time, you would have thought definite W, right? Historically-speaking, yes. OSU is now 38-3 when not turning the ball over in the Gundy era. Here are the three losses.

The Baylor one in 2015 probably hurt the most because they were playing a third-string WR-turned-QB, and OSU was 10-0 at the time, but all three of these are a case of talent > penalties and turnovers.

A lot depends on Chuba and Tylan, right? If one or both leave, then you’re kind of where you’ve been for the past few years — wandering a little bit with another Big 12 title more or less a mirage off in the distance that you might fall into but certainly aren’t on track for. That’s the probable scenario, but if they both return … then all of a sudden you only lose Marcus Keyes, Johnny Wilson and A.J. Green among the starters, return what was a tremendous defense over the second half of the year and have probably the best big three in the league, if not the country going into 2020.

So … you know … not much riding on those decisions in the coming weeks.

It’s a strange time to be an OSU fan. There might be hope — in the form of No. 2 and No. 3 pulling a Rudolph and Washington and returning for a final gallop together — but hope is a dangerous thing around these parts, and in college football in general.

The double-edged sword of hoping in something you cannot control is that the moment you feel as if it’s time for the payoff, the reality is that the bill is due.

Hopefully we — like Gundy — get to roll that over one more year. Because I’d love for OSU to play a better SEC team in a bigger bowl game 365 days-ish from right now. But to even have a shot, their best RB and best WR are going to have to shun a future rife with potential wealth and professional success for another year of dominating at the college level just like they have for the majority of their respective careers.