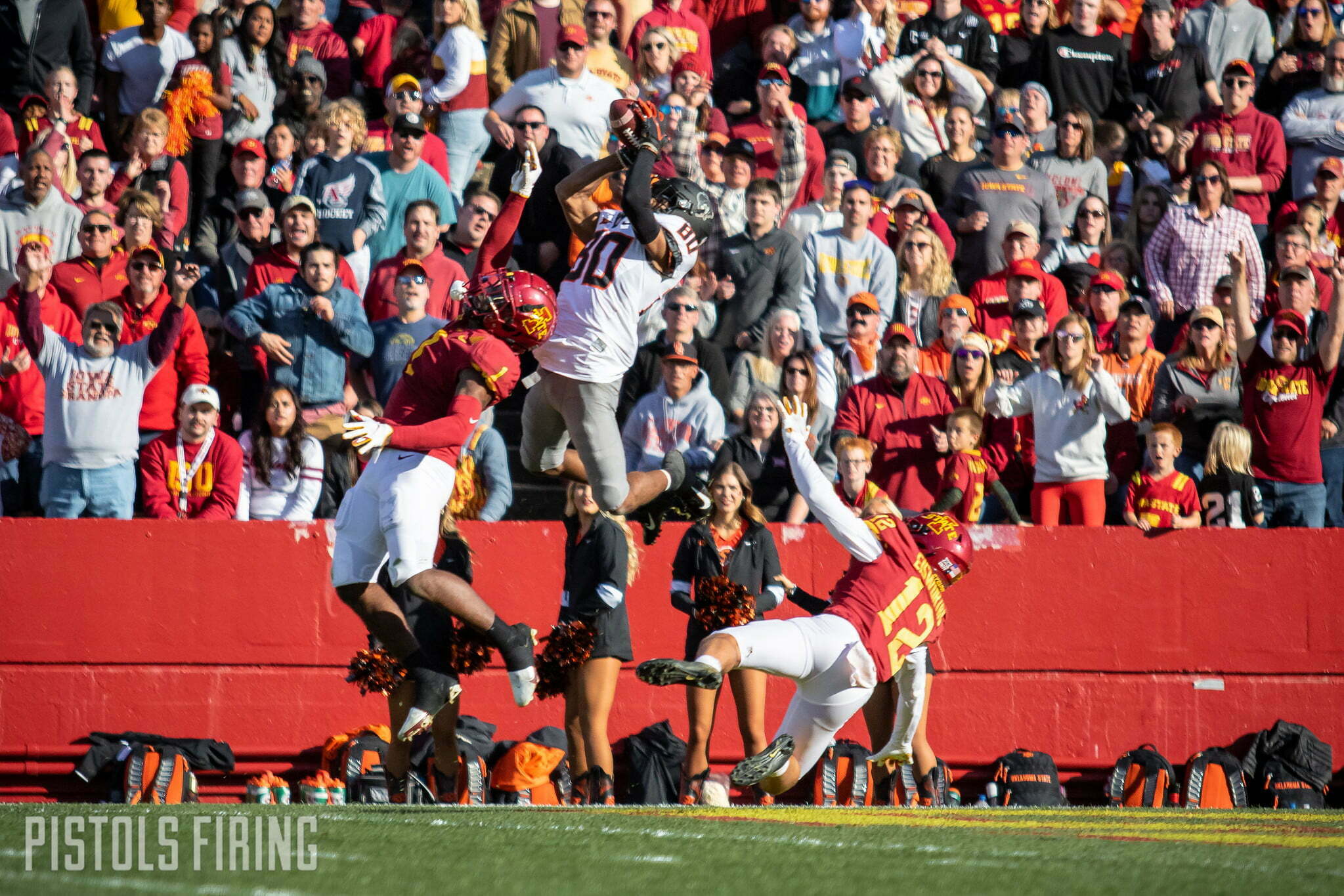 AMES, Iowa — For the first time this season, the Cowboys head into a new week having lost.

Oklahoma State fell to Iowa State 24-21 on Saturday in Jack Trice Stadium. Here are 10 thoughts on the game.

1. Another Controversial Call Ends Another Unbeaten Season in Ames

An unbeaten Cowboy team heads into Ames … The OSU faithful don’t want to hear the rest.

It was close. The officials had consistently given short spots all game, and when a spot of the ball goes into review, things don’t often get changed.

2. Play with Fire, Get Burnt

Not that this game should’ve been a blowout, but OSU has played close games this entire year. Finally, the bubble burst.

During the game, this one didn’t feel a whole lot different to the six prior. Tension was palpable. Every snap mattered. But when the final whistle blew, OSU had lost.

When OSU stuffed Iowa State on a fourth-down attempt and put together a touchdown drive to go up 21-17, it felt like OSU was going to do what it had done all season. Even when they put together the late drive ahead of the controversial fourth-down call, it felt like the Pokes were going to find another way to win. It just didn’t happen.

“All the adversity we had gone through, it was the same old stuff,” Presley said. “I truly believe if they called that a first down, then we would’ve went and scored and we win the game. It’s not under our control. The game is over now. We can’t get complacent. We can’t let down just because we lost. People aren’t going to feel sorry for you. The polls are not going to feel sorry for you, so we gotta come back tomorrow at practice and we gotta get to work.”

3. Gundy Says He Would Kick Again

UNLV transfer Tanner Brown was a hero in Austin, going 4-for-4 on field-goal attempts to give the Cowboys a win. It was a different story on a chilly, windy afternoon in Ames.

Brown was 0-for-2, missing from 50 and 32 yards. Hindsight is what it is, but had he made one of the two, the game potentially goes to overtime (and had he made both . . . ) It’s extra tough because OSU was in fourth-and-short on both attempts.

The third-quarter attempt in particular will get put under a microscope. It was 4th-and-1 from Iowa State’s 15. The game was tied at 14 at the time.

Gundy’s decision to attempt the kick was fair. It seemed like a gimme for a kicker who was 4-for-4 the week before and his miss earlier in the day was a long attempt. The thought is, you make the kick and take a lead on the road with a defense that has already won you six games on the season. It just didn’t turn out that way.

It’s the life of a position that only gets called upon a few times a game. Every swing of the leg means a lot.

Through seven games, Oklahoma State has scored 3 points in the third quarter.

It’s an unimaginable stat, but a Brown field goal in Austin is it. It’s not as if the Pokes are necessarily lighting up the scoreboard in other quarters, but getting beat 44-3 in one quarter is certainly going to cause some issues.

“I don’t know,” Gundy said. “We need to try to find a way to play better in the second half. The timing of the game, it’s hard to really tell, as I think about it. It’s hard to tell. Halftime adjustments are the only thing that I could hang my hat on and say, ‘We need to maybe look at a different way to present ourselves with opportunities in the second half. Sitting here right now, I really don’t have an answer for you.”

OSU’s bell-cow back didn’t get a ton of work Saturday.

Entering the game, Jaylen Warren had averaged 32 carries a game since the Boise State contest. He had 18 against Iowa State.

Things started off well enough. Warren went into the break with 10 carries for 54 yards, but he had only eight carries for 22 yards in the second half. There are reasons for it. Iowa State has a good run defense, and for the first time since the Kansas State game, OSU was having success throwing the football.

It was just odd to have a fourth quarter without Warren gashing a team with a handful of cutbacks.

Spencer Sanders played one of his better college games Saturday. It just so happened it came in a loss.

Sanders was 15-for-24 for 225 yards, three touchdowns and no interceptions. Give that statline to someone who didn’t know the result, and they’d probably assume the Cowboys had won.

He was climbing the pocket for what felt like the first time in a while, and his touchdown pass to Tay Martin in the fourth quarter was exquisite.

Add that with the fact that Sanders rushed 10 times for 29 yards, and it was a solid day for him. But, fair or not, wins and losses often fall on the QB in the public eye.

He was able to get out of the pocket and force OSU’s defensive backs to cover for an unfair amount of time. When someone would spring free, Purdy found him.

Aside from the controversial fourth-down call, nearly everything Presley touched Saturday turned to gold for OSU.

Listed at 5-foot-8, Presley outjumped a pair of Iowa State defensive backs for a 42-yard touchdown with less than a minute to play in the fourth quarter.

Presley finished with six catches for 84 yards and two touchdowns. He had 147 all-purpose yards after adding 67 kickoff return yards. It was another step in the right direction for someone who will wow orange-clad fans for years to come.

Speaking of, Collin Oliver got another sack Saturday, bringing his season total to a team-best 4.5.

He’s only a true freshman and is averaging 1.33 sacks during the past three games. Let’s say he does exactly that for the rest of the season, his sophomore year and his junior year. That puts him, roughly, at 47 career sacks. For reference, Leslie O’Neal has OSU’s career sack record with 34 sacks.

Surely, Oliver won’t reach that ridiculous 47 figure. But also, he’s only going to get better after a few summers in Rob Glass’ weight room. So, it’s not ridiculous to thing he could threaten O’Neal’s record.

Had OSU won Saturday, it would have been difficult for the Pokes to not make it to the Big 12 Championship game in Arlington.

The loss makes things a bit of a four-horse race with two open spots. The four major contenders are: Oklahoma, Oklahoma State, Iowa State and Baylor.

OU has yet to lose (even though things got dicey in Lawrence on Saturday). Meanwhile, OSU, ISU and Baylor have entered a love triangle with a loss apiece, all to each other.

It’s probably still too early to start diving too deep into tiebreakers, so let’s look at remaining schedules.

If you’re an Oklahoma State fan, you’re rooting for . . . Texas. (I know, I know.) If OU and Texas win out and OSU only drops a game to OU, the Pokes would advance with a head-to-head against Texas.

Things get even more murky if one (or multiple) of OSU, ISU and Baylor could knock off OU.