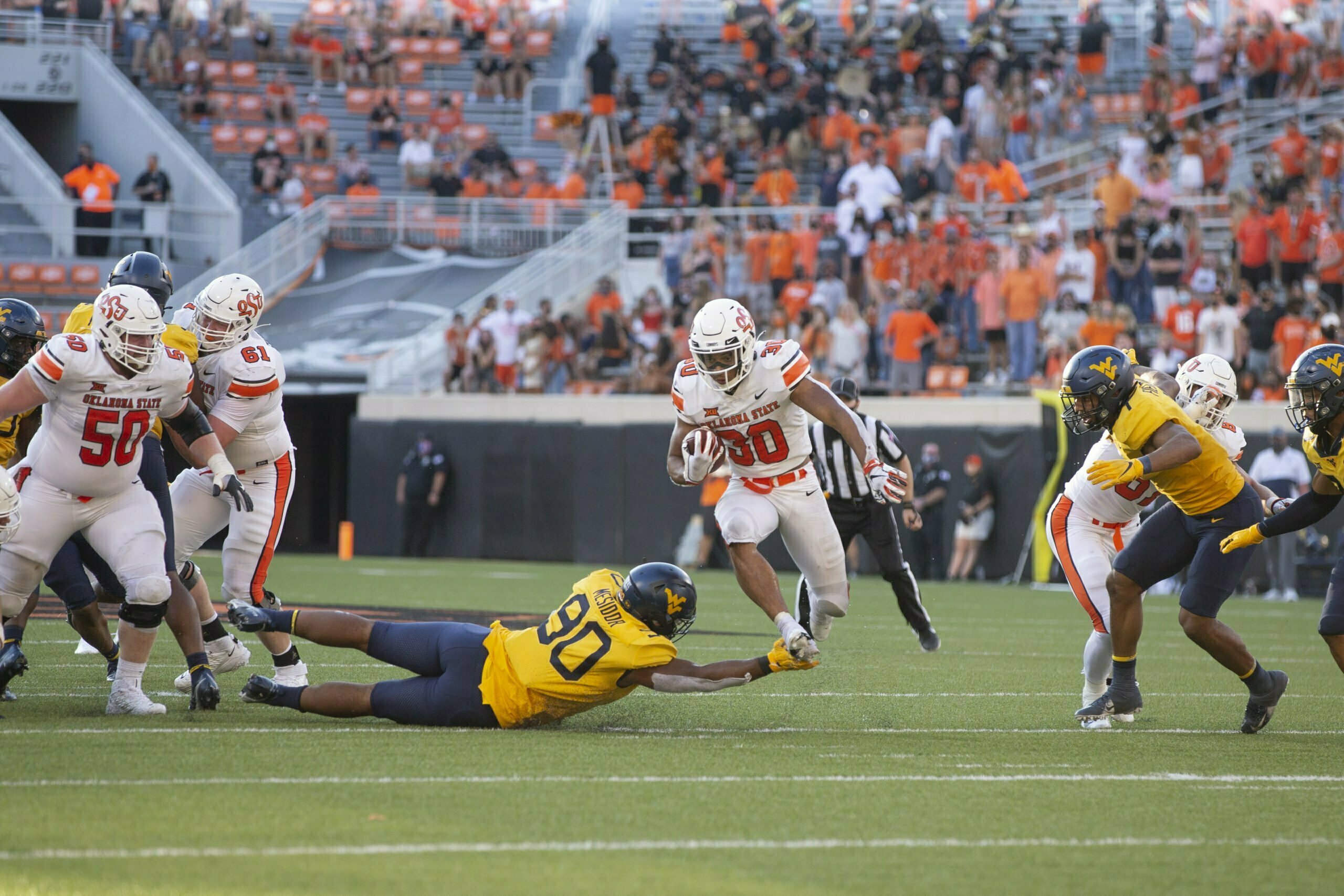 Well, it wasn’t much prettier than the Cowboys’ Tulsa win, but if the Big 12 taught us anything this season, it’s that being 2-0 is worthy of celebration.

Oklahoma State outlasted West Virginia 27-13 on Saturday, advancing to 2-0 for the 10th time in the Mike Gundy era. Here are 10 thoughts on the game.

The big drama heading into this game was going to be whether Spencer Sanders would be available after missing most of the Tulsa game with an ankle injury.

After Sanders went through warmups, true freshman Shane Illingworth got the nod for his first start. I thought it the right call at the time, and given hindsight, it was definitely the right call.

So much of Sanders’ game involves him being mobile, and giving an injured ankle an extra week (at least) to recover just seems right.

Illingworth didn’t light the world ablaze, going 15-for-21 for 139 yards, but he led the Pokes to another win.

In a way it seems like Saturday’s game was the best case scenario for Gundy, who is often ridiculed for his QB personnel decisions. Illingworth plays, Sanders doesn’t get further hurt, OSU wins and Illingworth didn’t light up the scoreboard to cause a deeper quarterback controversy.

There are plenty of reasons why OSU’s offense is struggling, but it doesn’t make it any easier to watch.

The 43 total points OSU has put up this season are the fewest through two games since 2005, Gundy’s first year. That season OSU mustered a combined 38 points against Montana State and Florida Atlantic.

I guess the hope is that there is a substantial uptick when Spencer Sanders returns. That or maybe we’ll see how far OSU’s defense can take the Pokes.

Jim Knowles’ group bent a little more Saturday than it did against Tulsa, but the group still carried a beat up offensive unit to victory.

OSU’s defense scored as many touchdowns as West Virginia did in the entire game. In the second quarter, junior college transfer Tyren Irby took a Trace Ford strip sack more than 50 yards to the house. Irby was nearly in a celebratory walk when he got to the 15-yard line, but hey, he still managed to get in.

After getting only one sack against Tulsa, the Cowboys sacked Jarret Doege five times and delivered blow after blow to the poor kid. Calvin Bundage had a pair of sacks, and he went full Jake “The Snake” Roberts DDT on his first.

As unfun as the offense is to watch, this group makes watching defense interesting.

West Virginia was just 6-for-17 on third down and scored just 6 points on two red-zone trips.

OSU’s defense kept getting beat on slants across the middle when blitzing linebackers, so there is still room for improvement. But this is quite the change of pace from a stereotypical OSU D.

I joked in The Chamber that this must be what it’s like covering a Big Ten team, where I’m talking about open-field tackling and a kicker who hasn’t missed.

4. Rodarius Williams Shouldn’t Be Thrown At

Rodarius Williams didn’t have his name said a whole lot last week, and for corners, that usually means he is doing a good job.

West Virginia went at Williams quite a bit Saturday, and I only remember him giving up one slant route. Meanwhile he had four pass breakups, and they weren’t the type of breakups guys might get for being in the general area as the receiver. He was swatting and punching Doege’s passes away from guys.

Here is a big one in the red zone in the fourth quarter:

How did it take us this long to get here? Sheesh those uniforms were beautiful.

I usually pump the breaks when people go “They should wear these alternate uniforms all the time,” but it’s true with these. Wear these on the road. Wear the 1988 throwbacks at home. Make a black one in this same style. Heck make a gray one.

Before Chuba Hubbard’s fourth-quarter score, Twitter was ready to usurp the Heisman hopeful and make LD Brown the Cowboys’ featured back.

I wasn’t quite there, but Brown was having another good game. And Hubbard wasn’t. Brown broke an early 66-yard touchdown run and Hubbard fumbled twice.

There is a vocal minority who is already over Hubbard for his social activism over the offseason, and then when the fumbles came social media turned into an interesting place.

I can’t prove this or state it as fact, but I imagine when Hubbard is in, defenses have put more respect on OSU’s run game than when Brown was in the backfield. That might not last much longer with how good Brown has looked, but all I’m saying is I’m not ready to jump into the boat that Hubbard was some sort of one-hit wonder.

Plus, this was beautiful.

When Thurman Thomas’ name and number was covered up in the west end zone of Boone Pickens Stadium, I was a little worried it wouldn’t look that great.

It just seemed so small up there.

But when the unveiling came at halftime, it looked beautiful.

It was a cool ordeal for Thomas, but my favorite part of the day came after LD Brown’s long touchdown run when he hit the cabbage patch in the end zone after Thomas showed him his classic move.

Getting lost in the “boo offense, yay defense,” of this season is how nails Alex Hale has been.

Hale hadn’t kicked a live, in-game field goal until this year, and he is a perfect 5-for-5 and they all came when OSU needed points.

A redshirt sophomore from Australia, Hale hit from 40 and 44 on Saturday, and he hasn’t really looked close to missing.

Given all the circumstances, this might have been a forgivable year for OSU to fall to start league play. It probably means nothing, but it could be some sort of weird 2020 omen that this year is different.

Given the option, I will take a 63-56 game over a 10-7 game every time. With that said, this league might stink this year.

OU lost to a K-State team that lost to Arkansas State. Texas should’ve lost in Lubbock before Texas Tech Teched. Iowa State, who lost to Louisiana, beat TCU. Kansas is Kansas, and Baylor is playing its first game this week.

Again, I love the Big 12 for all its flaws, but this year looks to be a good one for those who bedowngrade the conference.