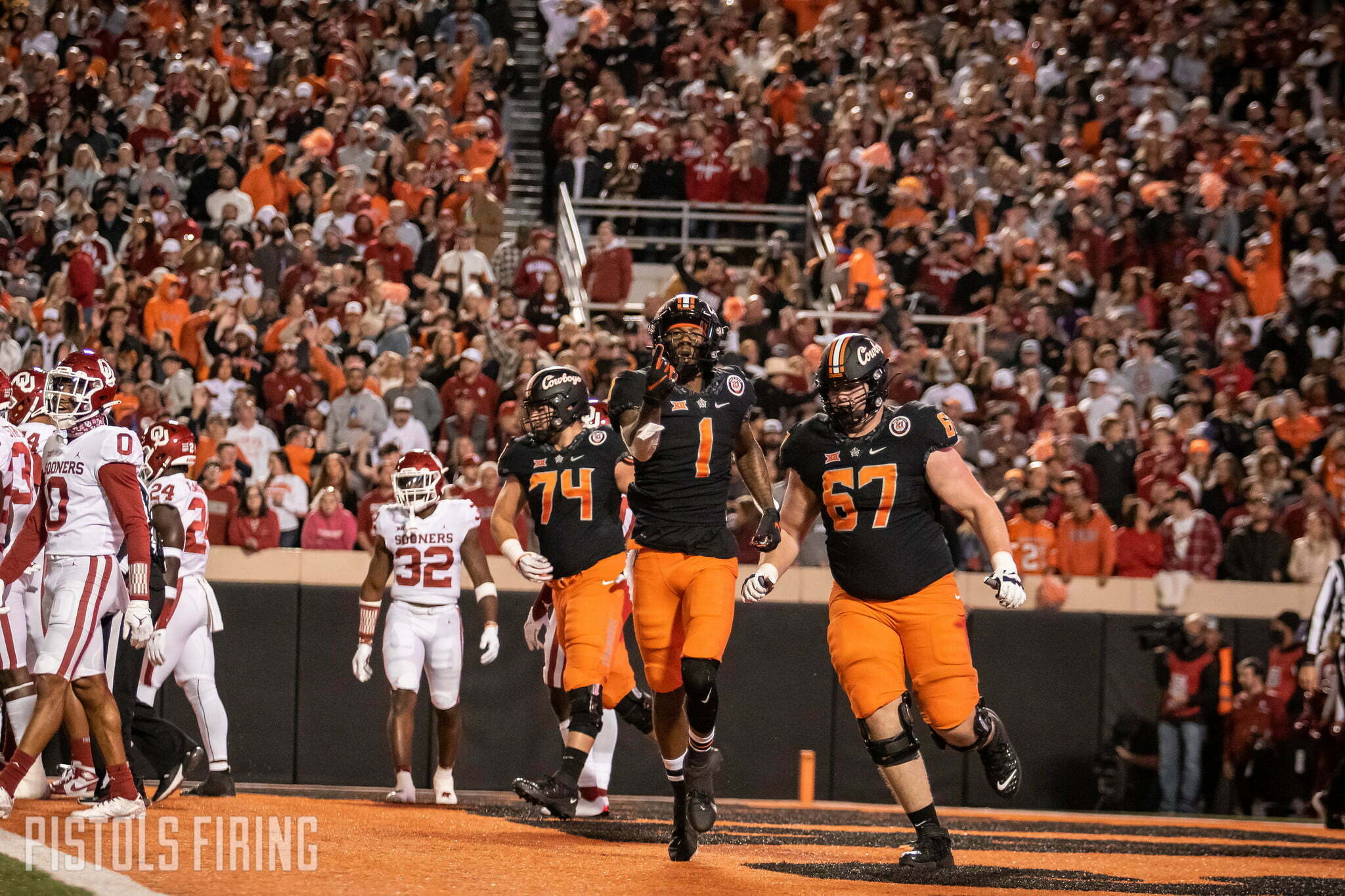 No. 7 Oklahoma State defeated No. 10 Oklahoma 37-33 on Saturday night in a Bedlam for the ages. Here are 10 thoughts from the game.

From a muffed punt that resulted in an OU touchdown to an incomprehensible fumble that sputtered to the end zone for a safety, this game had its moments, but OSU fought through them.

The third quarter felt like Justin Gilbert dropping a game-icing interception or a 2-point conversion attempt missing the mark, but this veteran group of Cowboys looked Squinky in the eye and gave it the double-birds.

“Game of a bunch of emotional swings with the special teams plays, kick return touchdown, couple really good returns, dropped punts,” OSU coach Mike Gundy said. “Both teams gave each other a touchdown then we gave up a safety with it. I told them it was a culture win to be behind [and win]. Their body language was good, attitude was good. They learned to play the next play.”

The Cowboys’ defense didn’t have its best half the first two quarters, but it wasn’t necessarily thrown in the best positions.

OSU’s defense got a stop in the end of the first quarter to preserve a 14-7 lead, but a roughing the punter call extended OU’s drive and led to a touchdown.

After a second-quarter field goal for the Pokes, the Cowboys’ defense got a stop before almost instantly having to get back on the field after Spencer Sanders through an interception. And OU started that next series on OSU’s 14-yard line.

Again, it wasn’t a perfect first half for the defense, but some things out of its control wasn’t going its way. Then the Pokes got into halftime and the Jim Knowles effect took over.

OU scored nine points in the second half — and none came on the OSU defense. Two points came from the safety then Brennan Presley muffed a punt that OU fell on in the end zone.

The Sooners were having success with one-on-one deep routes in the first half. Knowles schemed around that for the most part in the second half as OSU switched to zone coverage. The Cowboys also didn’t over pursue Caleb Williams as much, resulting in four second-half sacks with Williams not having anywhere to go.

It wasn’t the masterclass of holding teams to three or fewer points, but the adjustments Knowles was able to make were a different kind of impressive.

4. More Spencer Sanders Than I Expected

This is Mike Gundy’s third Bedlam win. The three winning quarterbacks: Brandon Weeden, Mason Rudolph and Spencer Sanders. Those are the type of lists you want to be on.

For the middle part of the year, much of the Cowboys’ offense came from Jaylen Warren. I was expecting the Cowboys to rely on Warren heavily Saturday, but they put the majority of the workload on Spencer Sanders.

Between his legs and his arm, Sanders provided the Pokes with 307 yards and two touchdowns.

Like with the defense, it wasn’t a perfect day for Sanders. He had a pair of interceptions. But he answered bell after bell and outlasted the Sooners.

2nd-and-5 from OSU’s 34: Williams’ threw an incomplete pass after Harper hurried him.

3rd-and-5 from OSU’s 34: Harper chases Williams halfway across the field and sacks him for a 5-yard loss.

Malcolm Rodriguez rightly gets a ton of the pub for leading OSU’s defense, but the linebacker standing next to him might be just as good. Harper finished Saturday with 10 total tackles, seven solo stops, a sack and four quarterback hurries. With the game on the line, Harper willed himself to make big stops when his team needed him the most.

“All I could think about was just the long days we put in this summer,” Harper said. “Just remembering that Coach Knowles always tells us to fight to the end, just the whole week telling us it’s going to be a dog fight and the man with the most effort is going to win.”

6. Tay Martin Backs Up His Talk

Tay Martin drew some social media attention last weekend when he said he expected to whoop OU’s booty. How did he back that up?

Martin caught seven passes for 89 yards and a touchdown, and he scored on a 4-yard run. Not too shabby.

“Like I said, man, the guys was just relentless today,” Martin said. “Mentally we was tough, and we knew we was gonna win this game. Like I said in a previous interview, and I’m glad them guys had my back and we got it done. We didn’t whoop their ass, but we got it done.”

Brennan Presley had been close to busting a kickoff a few times this season, and he got it Saturday.

A sophomore from Bixby, Presley left his mark on Bedlam’s lore by housing a 100-yard return.

It was the second time OU had kicked to him, with Presley breaking off 42 yards on his first attempt. Smartly, the Sooners didn’t kick him any more balls.

He added 40 receiving yards on a pair of catches, meaning in his first Bedlam start resulted in 182 total yards. Not bad for an in-state kid who didn’t have an OU offer. His brother, OSU commit Braylin Presley, has a similar skillset. OU hasn’t offered him either.

With eight seconds to play, Oliver got knocked to his knees but crawled to Williams and wrapped up his legs.

It was Oliver’s second sack of the day, bringing his season total to 9.5 sacks, a team-best.

Emmanuel Ogbah is the only player to record double-digit sacks in a season under Mike Gundy (and he did it twice). With two games to go, Oliver needs just half a sack to join that list and as a true freshman no less.

This is just the eighth time in my 26 years of life that OSU has beaten OU in football. Needless to say, anytime it happens it is a big deal.

The fans rightly stormed the field. It wasn’t just the students. It was adults, children, tons of different types of people.

Stillwater was electric Saturday night. It felt as if there was a roof on Boone Pickens Stadium with nowhere for the energy to escape to. The crowd didn’t give up either, even when OSU fell behind nine points and Squinky seemed to be attempting some Sooner Magic.

Who knows how many more of these there will be — Bedlams in general or particularly OSU wins in Bedlam. So, it’s moments like Saturday night that we’ll have as memories for the next 26 years and beyond.

10. The College Football Playoff Is Possible

The Red Sea of college football’s blue bloods nearly fully parted for the Cowboys on Saturday.

Ohio State fell to Michigan removing the Buckeyes from the Cowboys’ route to the College Football Playoff.

Oklahoma, obviously, fell to OSU. And Alabama nearly messed around and lost to a five-loss Auburn in the Iron Bowl.

OSU will obviously need to win in Arlington next weekend to continue its CFP hopes, but it would also benefit greatly from Georgia taking care of business against the Crimson Tide.

It would be tough for the committee to not have the Cowboys’ jump Notre Dame should the Cowboys win in Jerry World. And if Alabama also gets out of the way after a loss in the SEC championship, the Cowboys wouldn’t even have to leap Group of Five Cincinnati to get in.

Here is a breakdown of how things shook out in the Top 7 of the CFP rankings this weekend.