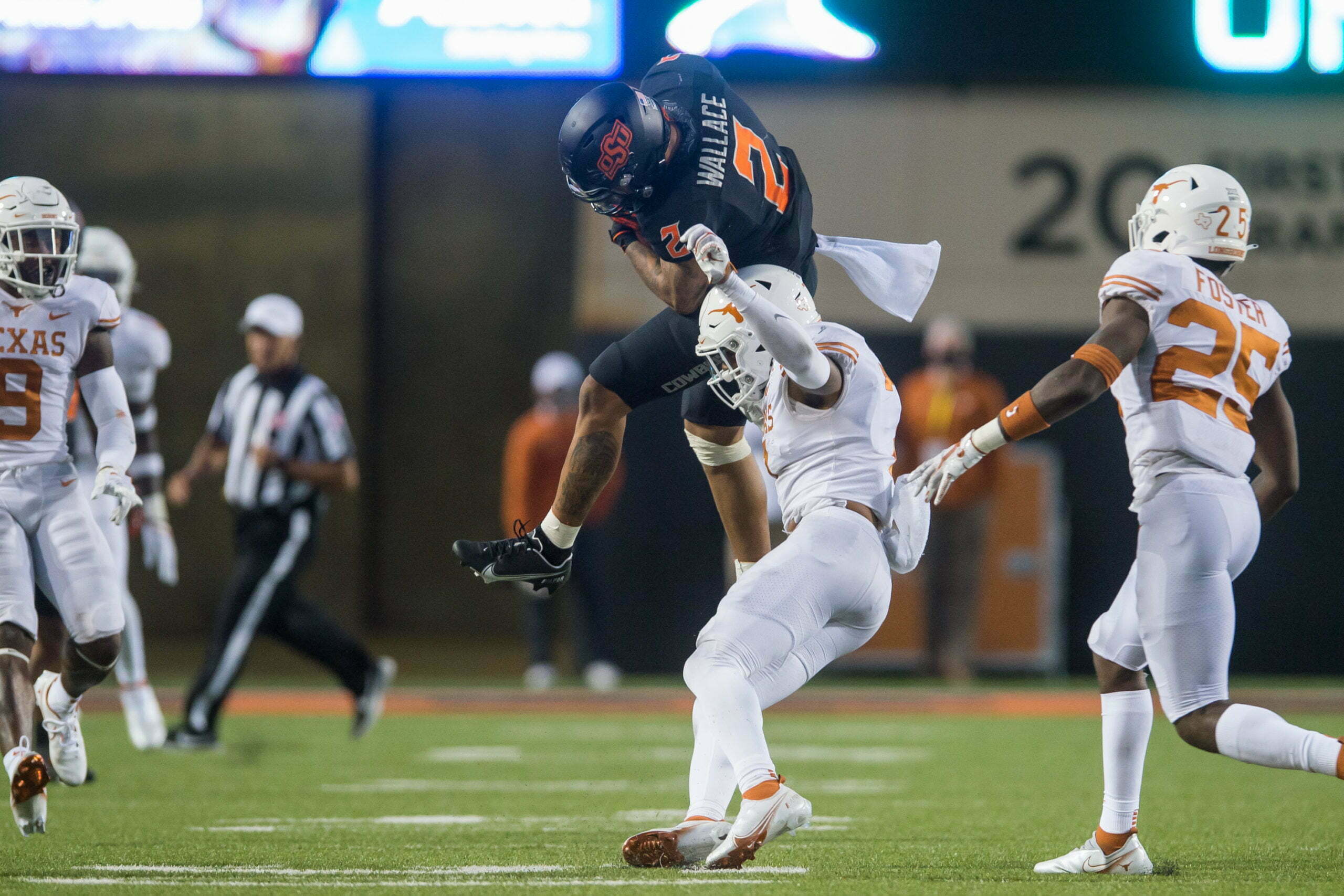 The Cowboys and Longhorns have had a pair of classics in their past two games in Stillwater.

Texas beat Oklahoma State 41-34 in overtime Saturday in Boone Pickens Stadium. The unranked Longhorns beat No. 6 OSU two years after unranked OSU beat the No. 6 Longhorns on the same field.

It was an incredibly entertaining game to watch, but it was ugly. Here are 10 thoughts from the slugfest that was.

Any time the Cowboys got any sort of momentum going, they would take that momentum and gingerly hand it to Tom Herman.

OSU got a big stop after scoring on its first drive, then Spencer Sanders and Chuba Hubbard scuffed an exchange and Texas got the ball on OSU’s 15-yard line.

OSU got a big fourth-quarter stop then somehow got a roughing the punter on what was fourth-and-22.

The Pokes managed overtime with Texas despite losing the turnover battle 4-0 and giving up a touchdown on special teams. The game was there for OSU to rout Texas, but the Cowboys just didn’t take it.

Spencer Sanders continues to have a case of the turnovers. He had a career day passing but threw his 14th career INT in his 14th career game. He was also credited with two fumbles, but it’s hard to tell whether the one was his fault or Hubbard’s.

This is a good Oklahoma State team, probably the best since 2017. However, Saturday proved this group isn’t on that 2011 team’s level.

I don’t want this to sound full homer, so let me start with this: Texas was issued 13 penalties for 142 yards. OSU was called for eight penalties and 70 yards.

With that said, OSU came out on the wrong end of three 50/50 calls at the end of the game.

There was the Dillon Stoner no-catch that was initially ruled a catch. It’s a tough call, the ball definitely touched the ground, but essentially everyone (maybe apart from the greater Austin area) thought there was no way the officials could overturn it. They did.

Then there was the pass interference on third down in overtime. Again definitely contact, but it was minimal. And it looked like the textbook definition of “incidental.”

Finally, we’ll look at an overtime hit Sanders took where it didn’t even seem like targeting was considered. Sanders is unquestionably a runner in this scenario, but what is a launch if not this?

I don’t think there was any malice in any of these calls, but who knows what is different if OSU flips heads on one of these coinflips.

OSU should’ve also never been in this scenario. If OSU takes care of the football and doesn’t have one of its two special teams blunders, this thing is over in regulation.

3. Defense Gets No Help

The Cowboys gave up a season-high 41 points Saturday, and those who didn’t watch the game will say this defense was a pretender.

However, seven of those points came from a 100-yard kickoff return, and 20 came after OSU turnovers. The Cowboys’ four turnovers gave Texas the ball on OSU’s 15, OSU’s 8, OSU’s 20 and Texas’ 41.

If you take away the kick return and the points following turnovers, OSU’s defense gave up 14 points.

Texas was also just 2-for-15 on third down. Unfortunately for OSU, the Longhorns were also 2-for-2 on fourth down, with both of those coming on their final drive of regulation where they took a 34-31 lead.

This OSU defense has been outstanding all season and was outstanding Saturday, but the group just couldn’t get any help.

As a football program, Texas is probably ready for Tylan Wallace to be an NFL player.

Wallace had 71 receiving yards in the third quarter, more than any other pass catcher had in the entire game.

For as up and down as OSU’s offense was Saturday, Wallace was all ups.

As good as Tylan Wallace has been against the Longhorns, Chuba Hubbard has struggled.

Hubbard had 72 yards on 25 carries Saturday. In his past two meetings against Texas, Hubbard has had 62 carries and 210 rushing yards. That’s 3.4 yards a carry.

Texas essentially sold out to stop him, putting a safety that could’ve been over Tylan Wallace closer to the line of scrimmage, but Hubbard just didn’t have it Saturday. He slipped a couple times, and his longest rush was only 9 yards.

This is another reason Hubbard struggled against the ‘Horns.

UT had seven sacks in five games entering Ssaturday. That’s 1.4 sacks a game. Against OSU, UT had five sacks. Joseph Ossai had three sacks and six tackles for loss himself.

The odd year that’s 2020 hasn’t done OSU’s offensive line any favors. Dylan Galloway retired. Bryce Bray and Jacob Farrell left before the season. Cole Birmingham and Hunter Anthony got hurt in the first game. Even in this game, former walk-on turned starter Jake Springfield limped off early in the second half with an injury.

OSU’s answer after Springfield left was to put redshirt freshman Preston Wilson at left guard and move Josh Sills out to left tackle.

Charlie Dickey might have the toughest job in America with the amount of “musical chairs” he has had to play.

7. The Curious Case of Spencer Sanders

Spencer Sanders had a career day Saturday, but there were points early where a decent chunk of the fanbase was calling for him to get the hook.

Sanders finished 27-for-39 with 400 yards, four touchdowns and an interception. He had career highs in completions, pass attempts, passing yards and passing touchdowns. But he was also credited with three of the Cowboys’ turnovers.

I’ve long been in the camp that Sanders is the best guy for the job, and I remain there. But there was a time early where I started to question it.

The turnovers were crippling Saturday, but he seemed to be better as the game continued. When the pressure was perhaps at his highest, Sanders threw for 62 yards in a 1:13 drive to tie the game with 10 seconds to go. That’s a series OSU can build off.

He seems so close to being a great quarterback, but right now, he is somehow fluttering between good and average.

Let’s go back to some OSU positives, still in the form of defense.

A play that stood out to me from OSU’s upset win against Texas in Stillwater in 2018 was a Sam Ehlinger touchdown run where Malcolm Rodriguez met him in the hole but whiffed on the tackle.

On Texas’ first drive Saturday, Rodriguez and Ehlinger met in a similar position with a different result.

It’s an ode to how good OSU has developed this defensive unit and how solid of a hire Jim Knowles was.

OSU (and all of the Big 12) will not make the College Football Playoff this season.

The Cowboys needed to go unbeaten to make it. Alabama boat raced Georgia a few weeks back, and the Bulldogs were still ahead of OSU in the polls.

So, the CFP dream is dead. It looks destined to be another year of Ohio State, Clemson, Alabama and another SEC team. The poor Pac-12 hasn’t even started yet, and its chances are already slim.

With that said, OSU still has a shot (and a good one) at making the Big 12 championship game.

This does, though, mean OSU will more than likely need to beat OU. OU and Texas have each lost two Big 12 games. If they both win out, OSU wouldn’t make it.

Gundy and the players always say their goal is to win the Big 12. Every game from here on out is going to mean that much more if they want to meet that goal.