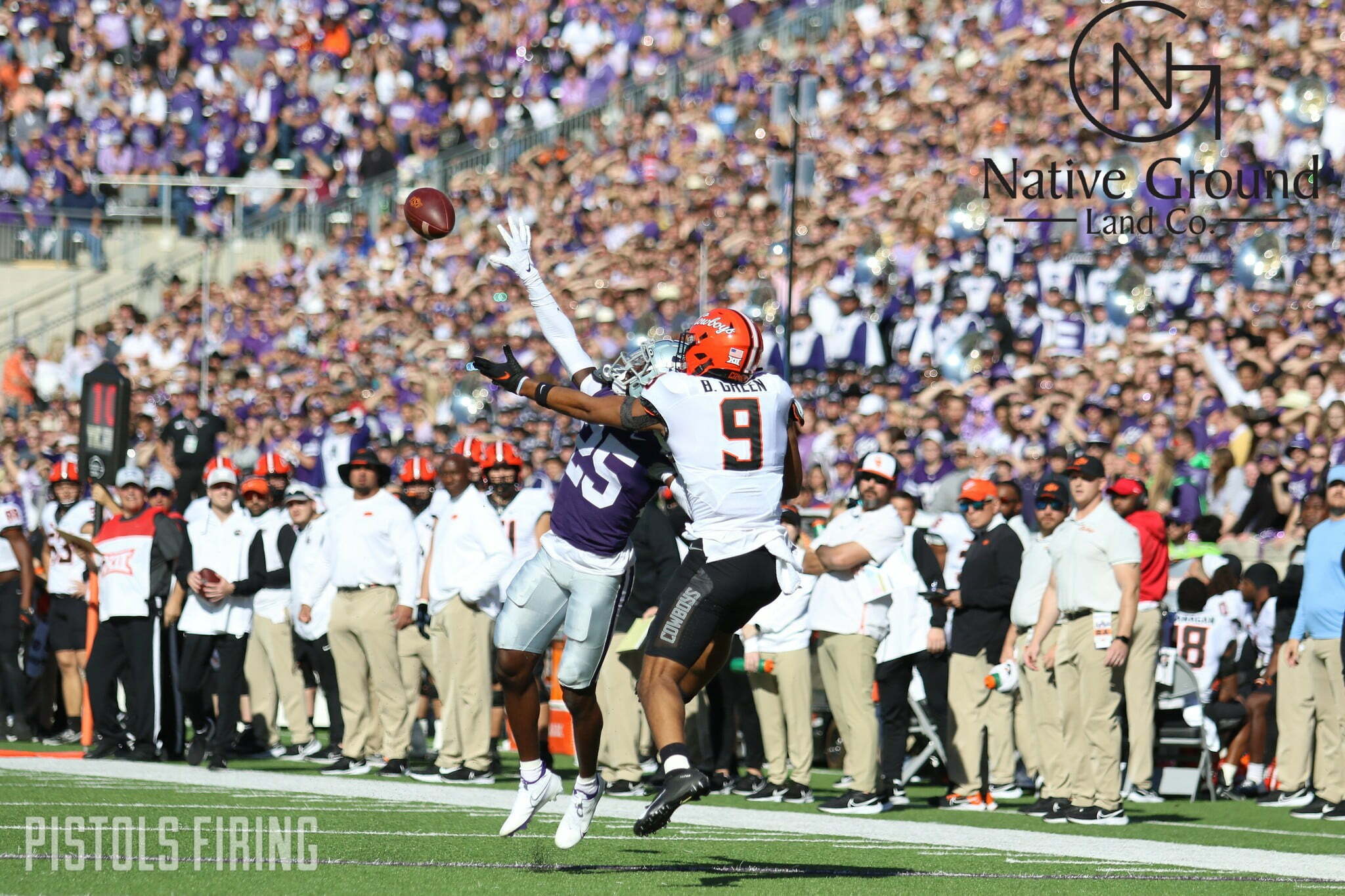 Oklahoma State got ravaged 48-0 on Saturday at Bill Snyder Family Stadium. Here are 10 thoughts on the game.

1. The Worst Loss in the Gundy Era

This loss is just the eighth time a Gundy-led team has lost by more than 30, besting (or worsting) OSU’s 39-point loss to Texas A&M in 2005 as the biggest loss of the Gundy era. That 62-23 loss, where Al Pena threw four interceptions, was 6,224 days ago.

Here are the other times OSU has lost by more than 30 points under Gundy:

Early in the game, OSU was actually moving the ball with some success before drive-killing miscues halted things.

On the Cowboys’ first drive, they got down to the K-State 38. On 3rd-and-8, Spencer Sanders zipped a ball across the middle to Stephon Johnson that might’ve gone for a touchdown … had Johnson caught it. The ball squirted between the true freshman’s hands before OSU failed a fourth-down attempt.

The Cowboys started with good field position two drives later. Sanders hit Brennan Presley who made half of Riley County miss but on his string of jukes, he got the ball stripped away from him and Kansas State recovered at its 18-yard line.

Who knows what that thing looks like if it starts 14-14? Then things started getting away from the Cowboys, play-calling became more predictable and the Wildcats swallowed the Pokes from there on out.

When Gunnar Gundy scampered for 22 yards in the fourth quarter, it made him the Cowboys’ leading rusher.

There’s no way around it at this point in the season: the Cowboys stink on the ground.

OSU had 30 rushing attempts for 54 yards Saturday — a woeful 1.8 yards per carry (even more woeful considering Deuce Vaughn ran for 7.2 yards a carry and had more yards in his long rushing touchdown from 62 yards out than OSU did all day.)

There are excuses built into this one: Dominic Richardson was out, Hunter Woodard was out, a banged-up Preston Wilson made his return after missing two games. But, aside from maybe the Arizona State game, the Cowboys haven’t been successful running the ball all season.

And it’s hard to pinpoint what is going wrong. Is it a physicality thing? A personnel issue? Schemes? I don’t know, but it handicaps everything else OSU is able to do. Spencer Sanders can only play Superman for so long until teams figure out OSU stinks at running the ball and can turn OSU into a one-dimensional team.

4. Spencer Sanders Gets Hurt Down 41

This is very much a hindsight take.

With OSU already down six scores in the fourth quarter, Spencer Sanders — already dealing with injury issues — scrambled on 3rd-and-10 only for K-State linebacker Khalid Duke to land with his full bodyweight on him. As he oft does, Sanders scrapped himself off the turf. OSU went for it on fourth down, needing 41 points to tie, and Sanders was sacked by all-everything defensive end Felix Anudike-Uzomah.

Third-string center Eli Russ guided Sanders off the field. Sanders sat on the bench for a bit in clear pain, went in the medical tent for a few minutes and then trotted to the locker room gingerly holding his right arm.

He’s competitive as they come, but with him already playing hurt, it might’ve made sense at that point to live to fight another day. For OSU’s sake, hopefully Sanders can gut out another performance in a week.

“Spencer wanted to play, wanted to compete,” Gundy said. “He has the right to do that, and so until then we let him fight.”

With Adrian Martinez’s status uncertain, most OSU fans were coming into this game hoping to see Will Howard play in his stead. That was until Howard looked like Baker Mayfield in the 2017 Bedlam game.

Howard, a junior who still might redshirt this season, threw for 296 yards and four touchdowns. With that performance, there might be a legitimate QB controversy in Manhattan as the Wildcats have two solid options to lead them down the field.

“I thought we saw the things we needed to see,” OSU defensive coordinator Derek Mason said on whether Howard playing changed anything. “I thought going into the game the plan was good. I gotta look at the film because you see it firsthand, and here’s what happens: one thing happens, then another thing happens, then another thing happens. Then all of a sudden, you find yourself trying to plug it with like five fingers and 10 toes. I think really for us, when we look back at this game, it comes down to critical situations where we didn’t get them off the field in critical situations. They made some plays, we missed some plays. You look at it, and the game can get away from you real fast.”

6. Come Back to Earth, Freshman

After Stephon Johnson Jr.’s breakout performance against Texas, Mike Gundy was careful not to anoint the young pass catcher too early, saying he was impressed but Johnson hadn’t arrived quite yet. We were reminded Saturday that he is only a freshman.

He had the big drop on OSU’s first possession, finishing the game with two catches on a team-high nine targets.

Johnson is still going to be a great player for the Cowboys some day, and he’ll still contribute this season. But this is another example as to why Gundy isn’t racing young pups on the field.

Without getting too deep into specifics, Mike Gundy said he changed some things up at practice this week in hopes of not suffering further injuries. Gundy said he doesn’t plan on swaying away from what is working again.

A look at the injury report, and it’s easy to see why Gundy would want to bubble wrap all of his guys for a week. It’s another hindsight deal in that if OSU comes out looking fresh, the move was genius. But with the result now in hand, it turned out to be the wrong call.

“I didn’t do a good job this week,” Gundy said. “I was concerned about a variety of things this week. We didn’t practice like we normally practice and that’s my fault. And that’s what you get. I apologized to the team. I didn’t handle our team very well this week, and I’m not taking anything away from Kansas State. They’re a good team and they played really well. I don’t know, you’d have to ask coach, I don’t know if they could have played a better game than they played today.

“And then we weren’t prepared. We just weren’t. We weren’t very physical upfront. We couldn’t do much to balance ourself offensively. We just, we weren’t prepared and it’s really pretty simple. And I’ll take responsibility for that. I learned a good lesson. I tried to do a couple things different and obviously I’m not gonna do that again.”

8. Are Big Plays Becoming an Issue?

It’s a similar struggle the Cowboys had against Texas last weekend. It felt like Texas was able to just out-athlete OSU a couple times with Bijan Robinson, but maybe there is something a little deeper wrong there.

The past three times the Cowboys have lost on the road, the opposing fans stormed onto the field.

This is an attempt to turn chicken pooh into chicken salad (is that just normal salad with chicken in it?). But it shows where OSU is as a program that it is such a big deal to beat the Cowboys that students of Iowa State, TCU and now Kansas State felt the need to flood the field after their team beat them — even if it was by 48 points.

10. Arlington Feels A Million Miles Away

With how topsy turvy the Big 12 has been this season, the Cowboys are still in the hunt to get back to the Big 12 title game, but Saturday’s result (and how it came) makes it feel like AT&T Stadium is in Poland rather than a four-hour drive south of Stillwater.

The Cowboys need to win — that’s the first and easiest part. The not so easy part is OSU getting help from two of Texas, Baylor, West Virginia and Kansas — K-State’s next four opponents. It’s no longer good enough to be level with the Wildcats, as they’d get the go-ahead with the head-to-head win.

But, it’s possible. Texas is athletic and a tough out for nearly everyone it plays. Baylor is the defending Big 12 champ. West Virginia has — at times — looked good this year. And that game against Kansas could be the Jayhawks’ last shot at bowl eligibility.

It’s out of the Cowboys’ hands now, but here is to hoping this wild Big 12 season has a few more twists.