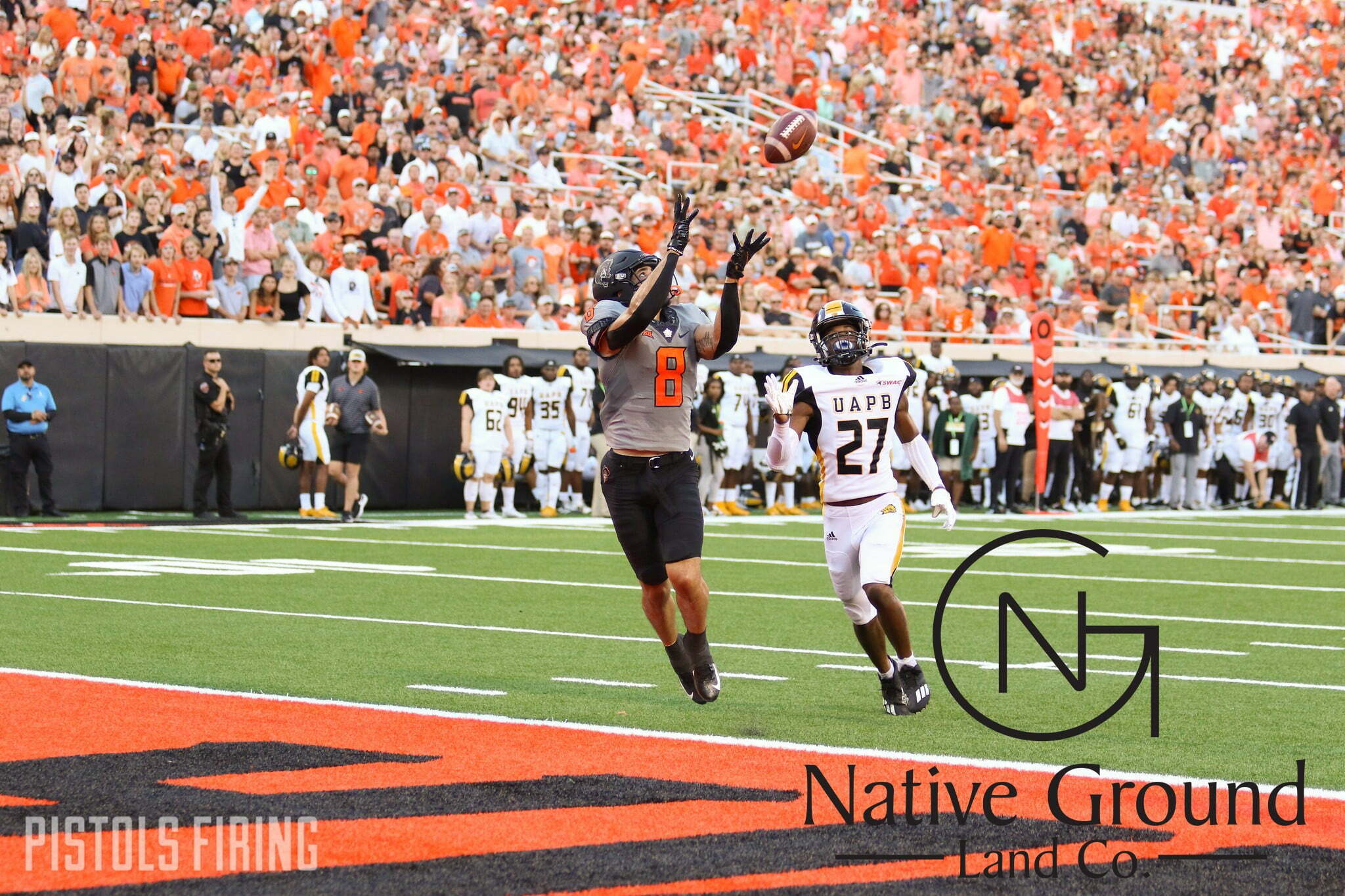 STILLWATER — The Cowboys were expected to win comfortably Saturday, but that was about as comfortable as a Big Ten punter is with his job security.

Oklahoma State throttled Arkansas-Pine Bluff 63-7 in Boone Pickens Stadium. If the Pokes wanted, it probably could’ve been 150-7. There weren’t many groundbreaking revelations from this lopsided a contest, but here are 10 things that stood out to me.

Spencer Sanders didn’t play a ton Saturday, and it’s hard to draw any big conclusions of his performance based on the level of the opponent. So, let’s scope out a bit.

En route to his 13 touchdowns this season, he has one interception. Last season, three games into the year, he had the six touchdowns and two interceptions.

In 2020, he didn’t reach 13 touchdowns responsible for until OSU’s Cheez-It Bowl victory against Miami.

Him lighting up the Arkansas-Pine Bluff Golden Lions for 242 passing yards and four touchdowns doesn’t mean a whole lot, but the big picture shows just how far Sanders has come.

When Spencer Sanders exited the game in the second quarter, OSU had 35 points and Sanders had handed the ball off only three times — three.

“Is that all it was?” OSU offensive coordinator Kasey Dunn said. “That was a lot — three too many. No, we felt like it was a very similar defense to Central Michigan, and there were some plays that we left out there a little bit vs. Central and we just kind of brought them back up, resurrected them off the call sheet.”

Gunnar Gundy threw his first college passes Thursday night, and aside from an INT that you could strongly argue wasn’t his fault, he looked good.

He finished 12-for-20 with 128 passing yards, two touchdowns and 42 rushing yards. His interception was his third career pass and came after he lasered a quick pass over to Braylin Presley. The ball bounced off Presley’s mitts and into the gut of a lucky Golden Lion.

But after that, things cooled down, and Gundy guided the offense on three scoring drives. He showed his wheels with runs of 11 and 24 yards, and while it seemed a lot of his passes were short, he had five completions that went for at least 15 yards.

“You’re always scared of throwing an interception,” Gunnar said. “It’s the worst thing you can do almost playing quarterback, but it was good in away because it kind of got me to the point where I was like, ‘Hey, stuff happens sometimes. You just gotta go back there, recoup and keep playing.’ Can’t change it.”

If you’re an OSU fan, you’d still rather Sanders have a long and healthy season, but this was a good game to get his depth some experience in case it’s needed.

Johnson caught four passes Saturday for 55 yards. His four catches and six targets tied Braydon Johnson for the most on the team. Even as the Cowboys were rotating in depth guys, he just kept finding the ball.

Johnson sort of fell into OSU’s lap late in the recruiting process. Out of DeSoto, he was committed to Oregon for nearly a year before decommitting in January. A few weeks later, he made visits to OSU and SMU, and then all of a sudden he was a Poke.

Toward the end of fall camp, Dunn singled out Johnson as someone who stood out in camp, and Saturday we got a glimpse into why.

“Moving forward with him, I think that’s a pretty solid guy out there,” Dunn said. “I’ve got no issues right now. I mean I have to go back and grade the tape, but if I had to bet on it right now, I’d feel real good about him moving forward and playing as a backup guy to Braydon.”

5. Talyn Shettron’s First College Catch Lives Up to the Hype

OSU’s highest-rated receiver recruit since Dez Bryant caught his first pass as a Poke, and it didn’t do much to temper expectations.

In the dwindling moments of the first half, Gunnar Gundy threw a 16-yard fade to Shettron who tapped a toe down in the newly painted east end zone.

That ended up being his only catch of the game, so all of his career catches have been touchdowns.

“He’s a touchdown specialist,” OSU coach Mike Gundy said. “We use him for just touchdown plays.”

Compressing expectations on a former five-star prospect who flipped a commitment from OU to OSU is tough, but I’ll try my best moving forward.

The Cowboys didn’t hand the ball off all that much, but Ollie Gordon, another darling freshman, made the most of his three carries, running for 65 yards and a touchdown.

A big, bruising 6-foot-1, 211 pounds, Gordon showed his speed on a 53-yard touchdown run early in the fourth quarter.

“We were all yelling from the box, I think he heard us,” Dunn said. “I definitely know he heard Woz [John Wozniak]. It was good to see him be able to take that thing the distance and put it in the end zone.”

The mismatch was evident even on special teams.

UAPB’s first punt of the day went south quickly. Trace Ford blocked it, recovered it and scored a touchdown off it, putting OSU up 14-0 with 12:24 to play in the first quarter.

“Gundy was harping that all week, that ‘We’re gonna send all of you guys. One of you guys is gonna get the block,'” Ford said. “I knew I had a chance. I knew the dude would drop down, so I was just hoping I’d get off the ball as fast as I could. I was lucky to be that guy to get that block.”

Then on the Golden Lion’s first field-goal attempt in the second quarter, Sione Asi knocked an offensive lineman back to where the kick bonked off the back of his helmet. The ball sputtered halfway down the field before Korie Black scooped it up and ran the rest of the way into the end zone.

Is this special teams dominance transferable to Big 12 foes? Maybe, maybe not, but it was fun to watch.

This actually has nothing to do with OSU’s game against the Golden Lions, but oh well.

The Big Ten is ludicrously lucky Ohio State plays in its conference. As if last week’s results of Nebraska losing to Georgia Southern, Iowa being inept on offense and Wisconsin losing to Washington State weren’t enough, let’s go through Saturday’s results.

This is a Top 2 conference in the country? This is a conference worthy of ridiculous media rights money?

The Northwestern result was perhaps the most comical. The Wildcats beat Nebraska to start the season and lost to FCS Southern Illinois, a team that was unbeaten entering the day with losses to Incarnate Word and Southeast Missouri.

If we’re going to continue speaking so highly of the prestigious Big Ten, a league that has as many national champions as the Big 12 since 2000 (two), then we can’t continue to bash the Big 12 or even the Pac-12 for that matter.

For more Big Ten roast sessions, check out our podcast.

9. A Sellout for an FCS Team

It was a warm day in Stillwater, reaching as high as 97 degrees.

That, paired with the fact that this game was never going to be particularly good, made it surprising that Boone Pickens Stadium was packed … at the beginning of the game (it obviously cleared out as the score difference grew and grew).

OSU’s all-out blitz of marketing games seems to be paying off. In the preseason, OSU Athletics announced some sort of theme for each game. This game’s theme was family weekend and teacher appreciation day. OSU discounted tickets back in mid-August, selling them for as little as $25.

With optics being an important part of this ever-changing college football landscape, selling out a game against an FCS foe is a good look.

The Cowboys’ off week comes early this year, but it also comes before what could be a pivotal game in the Big 12 title race — Baylor.

In a perfect world, maybe the bye comes before a Baylor game during Week 6 or 7? It’s going to be a long grind to the finish line for the Cowboys. If they make the Big 12 Championship game, they’ll play 10 weekends in a row.

But, the Cowboys also get an extra week to prepare for the reigning conference champs. If they can get a win against the Bears, the Pokes’ chances to get back to Arlington have to take a pretty big spike.

“If you were gonna draw it up, you’d say one more week would be perfect. People say, ‘Well, it’s after the third game and you play 12 games before you get into the next set. But here’s the difference, we practice the entire month of August. So that’s one month, so we’re almost at two months right now. So I’m OK with it. It’s fine where it was.”