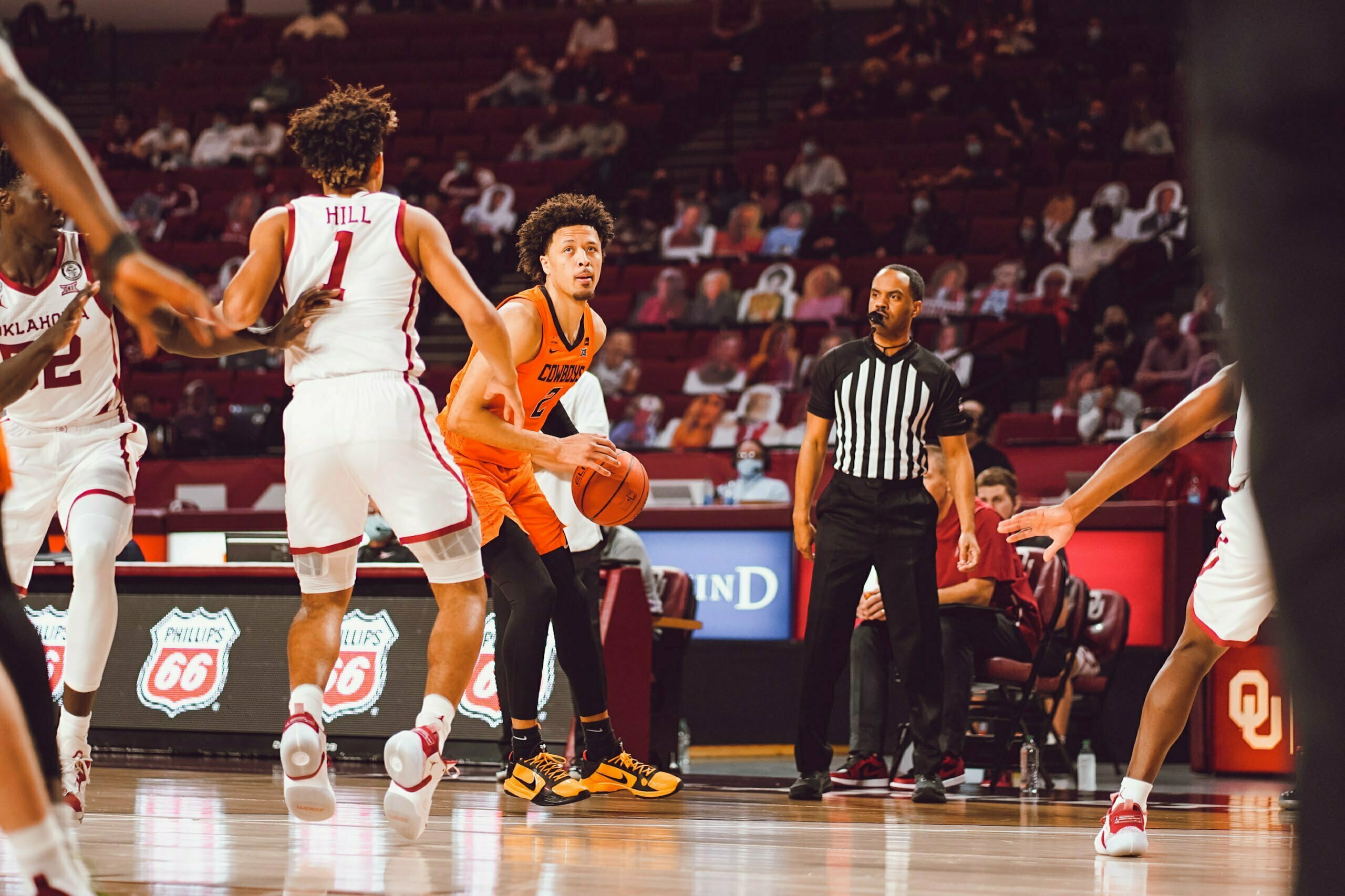 Cade Cunningham is a Bedlam hero.

Oklahoma State beat Oklahoma 94-90 in overtime Saturday in Lloyd Noble Center. In his first Bedlam, Cunningham dropped 40 points to go with 11 rebounds, both career highs. With this being such a good game, let’s do 10 thoughts instead of five.

No matter how Monday goes, Cade Cunningham has found his way into Bedlam history.

Cunningham’s 40-point performance was up there with Trae Young’s 48 in Stillwater or Jawun Evans’ 42 in Stillwater. But unlike with those other two, Cunningham won.

The phrase “hero ball” almost has a negative connotation at this point, describing guys who try to win games all by their selves. Well, Cunningham was the super hero that saved Oklahoma State’s day.

Avery Anderson had a breakaway layup attempt blocked in the first half.

As Anderson spilled to the court, Lloyd Noble Center erupted. That lasted all of five seconds when Cunningham coolly got the ball on the 3-point line and drilled one of his three triples of the game.

Cunningham did that all game.

With about 1:30 to play in regulation, Brady Manek tied the game at 70 with a layup. Cunningham scored 17 seconds later.

Elijah Harkless then hit a 3-pointer to give OU a 73-72 lead with 54 seconds to play. Lloyd Noble was going nuts. Cunningham scored 15 seconds later.

Trae Young’s Bedlam legacy centers on that game in Stillwater where he carried OU to overtime and finished with 48 points.

But, Young did so on 39 shot attempts. And perhaps Young’s Bedlam highlight involved him shying away from a scrum with Mitchell Solomon on Eddie Sutton Court.

In the first half of Saturday’s game, Cade Cunningham got double-teamed and lost control of the ball. Instead of chalking that possession up as a turnover, the projected No. 1 pick hit the hard wood and fought the ball away from two Sooners. The possession ended in a Rondel Walker 4-point play.

Cunningham also did his damage with just 21 shot attempts. That’s 18 fewer attempts than Young had in Stillwater.

4. This Is … Technically Still February

Cade Cunningham is going to be an All-American, and with more performances like this down the stretch, he might just be more than that.

I thought Cunningham out of the national awards races like the Naismith and the Wooden, but with this and three upcoming games against ranked teams, Cunningham has a shot to get back in the mix for those.

Cunningham has been good all season, don’t get me wrong. But other guys have seemed to be in control for those types of awards most of the season, guys like Jalen Suggs and Jared Butler, whose teams haven’t lost or Luka Garza, who is averaging 24.3 points and 8.3 rebounds a game in the Big Ten.

In a nationally televised game, Cunningham put 40 on a Top-10 team, and he has three more shots at doing similar impressive feats.

Cunningham wasn’t doing this against some woeful defender, either. Elijah Harkless is legit.

Harkless was tasked with guarding Cunningham for much of the night, and it was a fun battle. Obviously Cunningham’s 40 points and a win will say he came out on top, but there were times when Harkless straight up ripped the ball away from the future No. 1 pick. He finished with five steals.

“He’s a really good defender,” Cunningham said. “They put that matchup on me and really trusted him, and a lot of times they kind of let us play one-on-one. Anytime I can get you know one-on-ones and things like that, I’m gonna have fun. He’s a competitor. I’m competitor. We were going at each other.”

OU’s offense in the second half centered on getting Matthew-Alexander Moncrieffe switched on Austin Reaves and having the quicker Reaves beat Moncrieffe in isolation.

Reaves put up 14 of his 22 points in the second half in overtime. The Cowboys kept switching screens with the Sooners quick dribble hand-offs, and it looked like that was going to be the Cowboys’ death note.

That was until Boynton switched back to zone in overtime, keeping the bigs off the perimeter. The Sooners scored just one jump shot in the final two minutes of OT as a result.

It was a risk, too. OU had as much success against OSU’s zone as any team this season in the first half. The Sooners were good at getting the ball to the high post and forcing the Cowboys’ middle man into a 2-on-1, but Boynton had the guts to make the switch.

Entering Saturday, Bryce Williams was just 2-for-10 from 3 in his past three games and 0-for-5 in his past two.

Williams didn’t have a point at the half, missing his lone 3-point attempt. But then they started falling. Williams went 4-for-9 from 3 in the second half and overtime and finished Saturday’s game with 15 points.

He got confident, and it was bad news for OU.

The Cowboys have stunk from the free throw line for much of the year, but in perhaps the most hyped game of the season, the Pokes were nails.

OSU was 23-for-26 from the stripe in the first Bedlam. Cunningham, of course, led the way making 13 of his 14 attempts.

As frustrating as free-throw shooting has been for OSU fans this season, it’s important to remember that this is a young team. The Cowboys started two freshmen, two sophomores and a transfer senior Saturday.

This team is growing up, and it couldn’t come at a better time for Mike Boynton.

The fact that this game was Bedlam adds to just how special it was. It was a high-octane affair with a superstar dropping 40. It’s not like it was some tight game in the 50s.

Add to that the little storylines like Cunningham vs. Harkless or Rondel Walker scoring 11 points as a freshman against a state school that didn’t offer him, and this was an all-timer.

The past year has stunk, and this game would’ve been that much more fun with a full student section.

To this point, the most fun I’ve had covering a game live was that Trae Young Bedlam in Stillwater. I’m going to have to sleep on this, but it might have been usurped it.

Catch your breath, Round 2 of this thing tips off in two days.

The wacky world that is scheduling in 2020 has messed a lot of things up. It took away football games and preseason basketball tournaments, but it also gave the state of Oklahoma two Bedlams in three days.

I don’t think I would mind this becoming a regular thing.