I thought last week at Kansas was going to be the low point. Sure, OSU wasn’t going to win out but at least we had some fun, exciting, high-scoring, classic Big 12 football in front of us.

With that positive thought let’s get to the 10 Thoughts for this week.

1. OSU just isn’t very good: Going out on a limb here, I know, but it’s a strange thing to think about. Ever since 2009 passed and Brandon Weeden took the reins in 2010 OSU has always been an elite team or on the verge of it.

Even in its down year of 2012 the Pokes still scored more than 30 in every game except but one (a win over Kansas in which it scored 20) and was in every game it played.[1. I’ll listen to arguments about the KSU and Baylor games but both were at least interesting late.]

Not since the end of 2009 has OSU fielded a team that got curb stomped by its opposition. This blog didn’t even exist then. I was barely out of school then. It’s a strange proposition to consider that OSU is just lousy at the sport of football.

2. Doug Meacham showed off his offense: My favorite part of the game — because I love things like this — was Meacham TCU going for it on 4th and 1 on the goal line up 33 in the 4th quarter.

You want to hire the Shippensburg guy to move your puzzle pieces around while I’ve been toiling in the wings for a decade?

Fine, I’ll flip a barely-top-50 TCU offense last season into a powerhouse in 2014 and claim your squad as victim No. 6.

Have a nice flight back to Stillwater!

3. OSU’s defense has secretly not been that great: Not since the Florida State game, anyway. Coming into TCU OSU ranked No. 32 in the country in points per drive given up which is all right I guess but it was No. 93 in points per long drive.

Also, it ranked No. 96 in turnovers forced — normally a staple of successful teams in the Gundy Era. All of this showed on Saturday as OSU gave up 8.23 (!) yards per play and forced just one turnover — albeit a great one.

I don’t care if Todd Monken is calling plays for Aaron Rodgers, you aren’t going to win games doing that.

We saw the defense today that Gundy has been watching through his hands all season — a young, inexperienced, goes-for-the-home-run squad that whiffed on being opportunistic, whiffed on numerous 3rd downs (TCU was 6-15), and literally whiffed on about 55 different receivers running straight up the seam.

They’ll be fine next season but Baylor and West Virginia are going to do some things to this secondary that will put the FCC on red alert.

4. Daxx Garman makes me appreciate Clint Chelf: Let’s put JW Walsh[1. Would JW be better behind a bad line? Yeah, he probably would, but he’d also be a worse thrower and probably have like eighteen picks right now. Overall he’s probably the option which is something I didn’t think I would be saying a month ago.] over to the side for now and discuss these two guys.

Daxx has been alluring at times — tossing deep balls to Tyreek and deep slants to No. 3 that have us like:

But he’s been below average for the last three Big 12 games. Downright bad for a good majority of the time.

You can chalk it up to inexperience or a bad line or anything else you want to chalk it up to — these things are always easily rationalized — but the reality is that Chelf did more with less (at the skill positions) than Daxx is doing this season.

I had a confidence in Chelf drives I’m not sure I’ll ever have in Daxx drives. Maybe this is a good thing for the future given that it’ll make the Mason Rudolph decision easier but it sure sucks right now.

5. I was wrong about the game and about TCU: I picked OSU to win an upset this week and I couldn’t have been more wrong if I’d predicted Dana to never drink another energy beverage.

I thought the emotional toll of rolling with two top 10 teams would finally get the best of TCU and to be honest I wasn’t totally sold on Gary Patterson’s squad in general.

Side note here: How quickly do you think TCU fans would have taken 2-1 back in August against OU/Baylor/OSU in three consecutive weeks? Faster or not as fast as Travis Ford signed his 10-year extension?

They’re the real deal, though, and they only have three tricky games left (at WVU, at Texas, KSU at home). They might be the Big 12’s only chance at getting into the Playoff come December.

6. The offensive performance was unacceptable: I don’t really care if you have five 150-lb children blocking up front — to run 18 plays for 51 yards and not complete a pass in the second half falls at the feet of Mike Gundy and Mike Yurcich.

One thing I noticed that I feel like is the epitome of this offense right now happened in the second quarter. OSU picked up nine yards on first down and had a 2nd and 1 near midfield.

Instead of taking a shot downfield like the last, oh, five OSU offenses would have done, Yurcich ran a draw off to the left side that barely got across the first down marker.

Now maybe that was the correct play for that situation but it was so symbolic of how difficult every first down is for this team. I feel like I’m watching a cement mixer in a traffic jam trying to exit the highway every time OSU gains a first down.

That’s an abomination and it’s also a direct result of having an all-or-nothing offense.

The Prayer Raid is proving to be pretty effective today. #okstate

I’m not sure how to make that better — it’s not like Holgorsen’s teams or Monken’s teams were elite inside the red zone but this team is like Shrek inside there. Ton of heart, still ugly as hell.

8. Ogbah chasing record: One of the lone bright spots for OSU today was No. 38. He recorded his 6th and 7th sacks of the season which puts him in striking distance of this list. 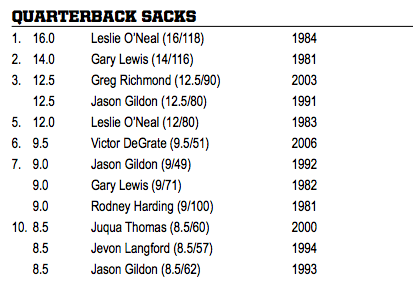 It’s hard to see him not cracking it over the next six (five?) games.

9. Where does the blame fall? My hot take blame game power rankings go like this:

I feel like the “fire Yurcich” train is just too easy to get on right now. What if he was calling perfect plays every time? How much better would OSU be? Would it be 33 points better against TCU?

Our offensive line stinks. The youth of our defense makes it look like it stinks. And the coaching isn’t helping. All of that is grounds for the hottest elixir of Twitter madness over a single coach (Travis Ford notwithstanding!) I’ve ever seen.

I’m not saying I won’t be on board by the end of the season (again Yurcich’s contract is up after this year) but I’m not right now.

Also, I’m not sure of the specifics that go into this working but somebody needs to figure them out:

10. So what now? I would have bet my life before this game that OSU would get to six wins. I probably would have bet my wife’s life we’d get to seven.[1. Kidding, of course, Mrs. Pistols is the best and I would never value my own existence over hers!]

What is the formula for this team beating halfway decent teams (which it faces five of in the next month and a half)?

I really thought Kansas — which OSU has struggled with for a variety of reasons over the last five years (2011 aside) — was a complete anomaly.

I thought “whatever, that’s a crap crowd, the offense was out of sync, this thing will come back around.” But now, for the first time since 2006 (?) I’m legitimately worried about OSU making a bowl game.

When does wrestling start?