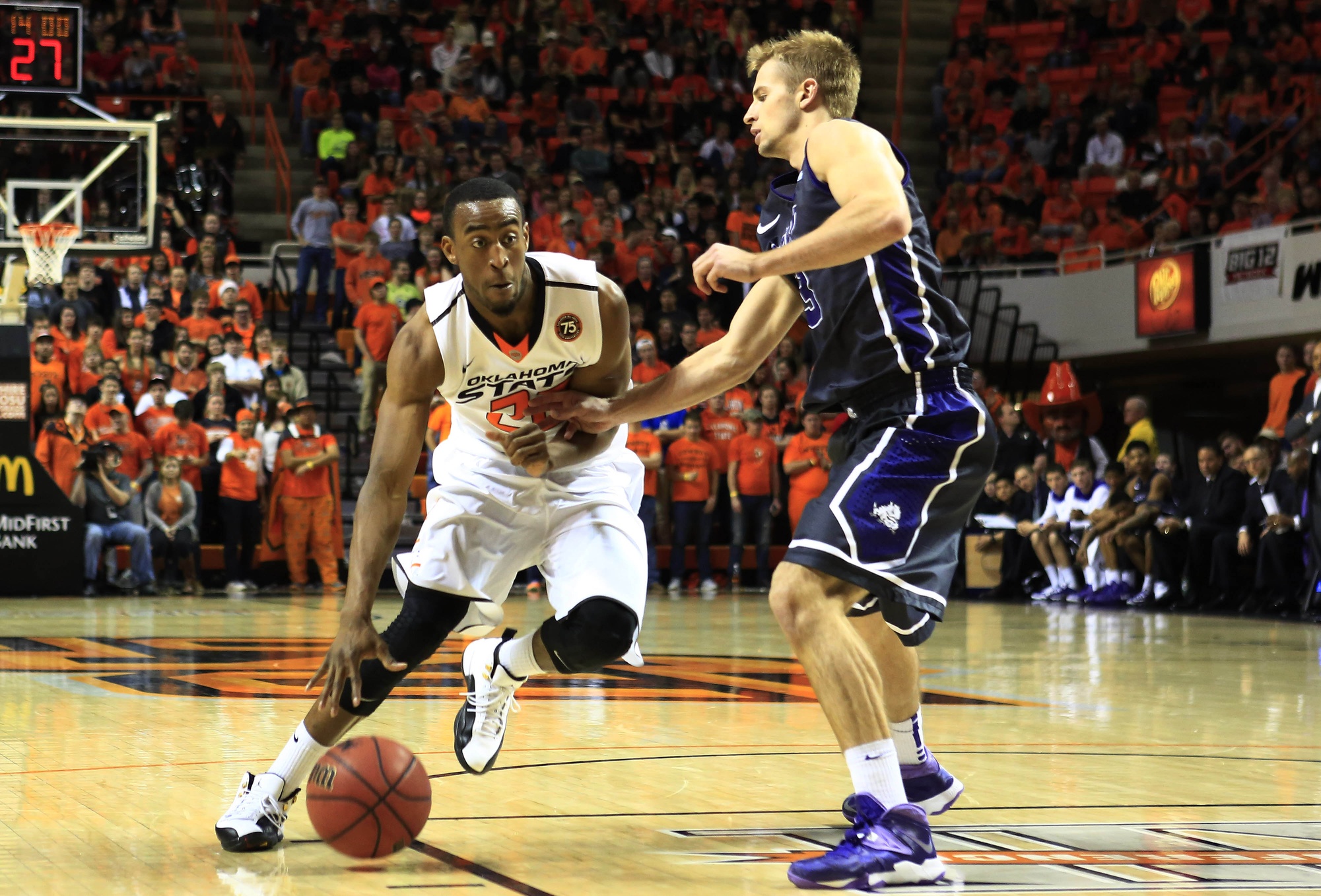 Oklahoma State got three early threes from Marcus Smart and never looked back.

The Cowboys used a scorching 55% shooting first half (including 7/11 from three) to bury TCU early on a business-as-usual Wednesday evening in Gallaghaer-Iba.

In doing so it improved to 15-2 for the first time since…are you ready for this…the 2006-07 season. Kansas looms, but that’s impressive.

Smart had 20 points, eight boards, five assists, and two steals and every other starter besides Brian Williams also chipped in eight boards to help overwhelm the clearly overmatched Horned Frogs.

Since the game was pretty much decided in the first half OSU used the second as a lab of sorts for Saturday. They tested different defenses, fed Le’Bryan often, and stuck Marcus at the three for stretches.

• Big thanks to @mattamilian for tweeting the game for me tonight. He did a great job. Except for this:

• What’s the statute of limitations on us “figuring out how to play without Michael Cobbins?” Don’t you either figure it out or not figure it out at some point?

• I wish Markel Brown would change his name to Markel Brown The Most Underrated Player In The Country so I wouldn’t be so annoyed when announcers say it.

• How do we feel about Marcus making so many threes? Good to find his shot or bad that he’ll be overconfident taking it in bigger games?

• When’s the last time OSU had “probably the best player in the nation” on its team? Kurland? Is that it?

@pistolsguy they mean the game of basketball

• Mark Price has a kid in college?!

• I’d like to see more screens and shots between Kamari and Le’Bryan around the lane. They both have good 10-12 foot jumpers and I think could work off each other better.

• We’re halfaway through the season and Phil Forte is shooting 48% from three.

• More than shooting step-back threes or trying to get to the line, I’d like to see Marcus drive and dish more often. he can be so good at it and Kamari and Nash can finish around the hoop (I think).

• It’ll be interesting to see what OSU does on defense against KU on Saturday. You have to play zone, don’t you? If you don’t, they might have to move the Embiid-Murphy matchup to HBO or Showtime.

• You know, we complain a lot about OSU doing this or OSU doing that — what if your school was the second-best basketball and football Big 12 team that wears purple. That’s a tough road..

• I give announcing crews crap for calling Brian Williams “maybe the most athletic guy on this OSU team” but I do wonder where he would fall on an all-time verticals list for OSU players. Behind Desmond, Markel, and Spoon but ahead of Nash, James, Obi. Maybe in the Graham Bros. range?

• The Stevie-Forte-Smart lineup fascinates me. You can ask Smart to go get boards and putbacks and he can do it. I don’t think they should do it all the time but it offers some versatility at times, at least.

• I love that TCU’s coach doesn’t wear a tie. I wish more coaches did that. Also, didn’t his staff all wear matching purple vests during their last trip to Stillwater?

• Big fan of Lleyton Hammonds getting early minutes. I don’t even care what he does, he just needs to taste a Big 12 game (which, I know, this barely was).

• I’m with what Amilian said on the @pistolsguy account tonight, this wasn’t a “wasted game.” It was a focused performance by a team trying to win the conference — that’s good to see.

• The see-through Pete doesn’t get enough love. It looks so great on the white maple.

• Pokes haven’t been over 75% from the line since the South Carolina game the night before Bedlam. 62% tonight, that’s not going to get the job done.

• The announcer said Kamari Murphy looked like Keiton Page on Saturday when he made 3/4 free throws at West Virginia. That’s offensive…to everyone.

• How about every starter for OSU having eight boards except for Brian Williams. That’s a weird stat. Also, Gary Gaskins had four boards in three minutes!

• I feel like TCU’s uniforms are the ones Nike is like “uh, we got anything left over from our high school inventory? Throw a scary frog on them!” They’re the template unis you can order in Eastbay.

• Are we positive Soucek can bench the bar?

• This was so great.

• This was a Brandt Snedeker 3-foot putt at Lakeside gimme and OSU put it right in the center of the cup. All eyes on Saturday afternoon in Allen Fieldhouse.