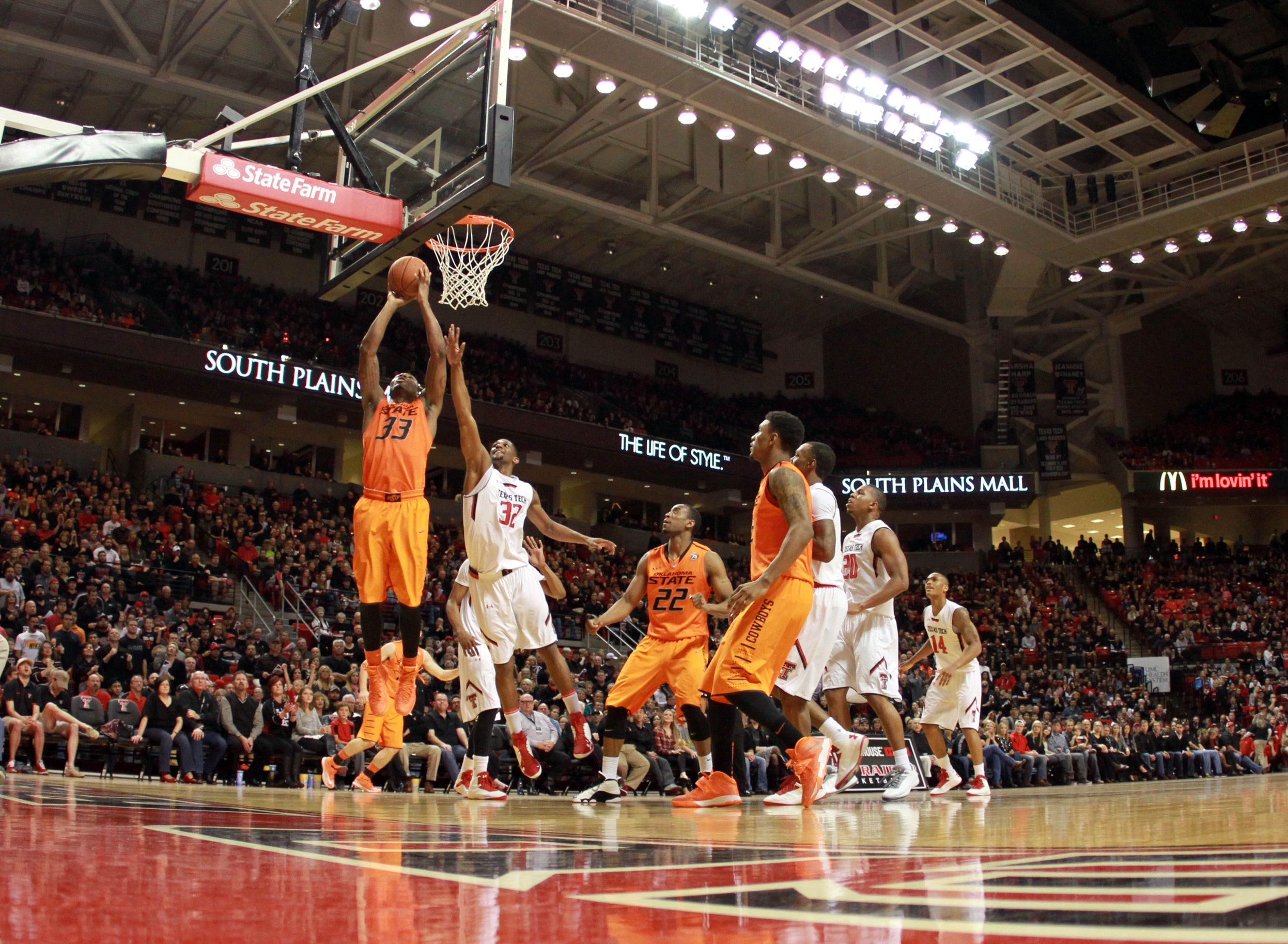 Where do we even begin?

I had this great lede all planned out for the last 39:10 of that game and then Marcus Smart just completely lost his mind.

As much criticism as Smart deserves — and he deserves every bit of it — I point all of the fingers at Travis Ford. He’s played the victim card all year, through every up and down of the season (and most of his career at OSU), and this team, and to a lesser degree, Marcus Smart, reflects that.

Did you see Ford in his postgame press conference denying that he’d seen the Smart shove (LOL, because his assistant coaches don’t have cell phones?) and saying they’d get it sorted out later?

That’s not leadership. That’s a “let’s pass the buck and hope ESPN is nuked tonight or somebody does something even more insane between now and when I speak to the media again and maybe this will all blow over” attitude.

That’s a microcosm of his reign — at least this season — at Oklahoma State.

And I didn’t need to watch the end of the game to see it, either.

Smart, who came into the game four for his last 33 from three-point range, took a 25-foot three 50 seconds into the contest. I mean, just a bomb. It was jaw-dropping to me, though I’m not sure why at this point.

Throughout the last week (and beyond, really) we’ve come to a consensus that the key to OSU winning basketball games is for Smart to stop shooting threes. That’s literally the only thing they had to do.

As OKC Dave pointed out, they’re basically turnovers at this point. If Ford can’t see that then he’s the dumbest person in the history of the world to make $1.8 million a year doing anything.

And if he can and just doesn’t care or have the stones to put Smart between Mason Cox and Gary Gaskins after taking the 29,000th stupid shot of this Big 12 Conference season — which I think is the more likely scenario — then he needs to be fired a lot more quickly than everybody thinks.

Because in college hoops you’re nothing without an anchor as your head coach.

You can’t make a bungee cord longer than the fall and expect a college kid to be smart enough to just jump from higher up.

This team is completely out of control and nobody needed Deadspin to make a GIF of Smart shoving a lunatic fan in Lubbock to recognize it.

I don’t even necessarily blame Smart for everything. Should he have gone into the stands? No. Does it matter what was said? Not really. Should he be suspended? Yes. Will he be? Definitely. Does this mean he could slide out of the lottery in the NBA Draft? Who cares.

Let’s go back to that three-pointer to open the game.

You know what a good coach would have done when Smart started yanking that garbage? Sat him down and chewed him out. Is Ford intimidated by the fact that Smart is (was) going to be a lottery pick or does he just think he has bigger problems to worry about?

Early in the year we kept hearing about how Smart is a great leader and how well he commands this team and…so on and so forth. I don’t care if the media paints Smart as the next Winston Churchill. He isn’t the coach.

I’m just not sure he can handle that. Not sure he was cut out for all eyes to be on him at all times.[1. As one person texted me tonight, Eddie Sutton controlled Tony Allen, Travis Ford can barely control Mason Cox!] Some people aren’t, and that’s fine, they get paid hundreds of thousands of dollars to be great assistants.

But they sure don’t get paid millions to drive a proud hoops program into the abyss.

This was the master stroke on Ford’s Renoir — whatever happens the rest of the season (and gosh, do we even want to find out?), this is all 2014 will be (and probably should be) remembered for.

Even if this team makes the NCAA Tournament (and that is looking less and less likely) it will bow out in the first or second round and everyone will look back at February 9 with a lot of questions.

I’m not sure Travis Ford has any answers.

• Two things people need to calm down about:

1. This isn’t the Artest melee all over again. It’s just not. ESPN is acting like Smart stole and set fire to the Mona Lisa.
2. Who cares what the fan said to Smart? I’ll let somebody much more qualified than me address that:

I don't care what the fan called him. If I retaliated every I was called a racial slur I would be doing time. The is inexcusable

Some things are hard to ignore, BUT no excuses! Deal with your consequences. I was called the N word EVERY game I played in Lubbock!

• Is it weird that I like Tech being good at basketball? I also like them being good at football. It just feels like a great Big 12 Conference needs a good Tech team in both sports.

• The charging call on Smart in the first half was garbage but you kind of deserve those calls when you whine and flop like he does. He won’t get another call all year (ever?)

• Sometimes I wish Forte would try to get to the bucket more. He’s more money at the line than a Price brother but he never gets there. I know that’s not really the plan but maybe it should be?

• If Forte were to get a tattoo, what do you think he would get? He’s a “words on the wrist” guy like Redick, yes?

I could see SN1P3R on his right wrist.

• What is Soucek’s skill set? And how much worse has he gotten?? Actually, are we positive Soucek was recruited to play basketball? There had to be something lost in translation, right?

• We ran one good play in the first half and it was a Smart screen and mini-roll where Sager hit him down the lane and he kicked to Markel for a wide-open three. I almost had a stroke after watching the ball movement on that play.

• How much fun would it be if Mike Holder was on Twitter? Somebody has mentioned this before but the comedy of us tweeting at him during these games would be unparalleled.

• One of the announcers said “Ford took the perimeter jumper out of Smart’s game for tonight” in the second half. Did you watch the first half, or no?

• Hmm…although I think the offense is a bigger mess than the defense.

• It felt like Tech didn’t miss a shot for the last 10 minutes of the game. Reality: seven for their last 11. Pretty great way to end a game if you’re them.

• Am I the only one who feels like sometimes we run away from dudes who have wide-open layups? Maybe we do because we can’t afford to foul. Maybe I’m seeing things. Maybe it’s 1 AM and I need to go to bed..

• We have three NBA guys and our offense is “gosh, I hope the short, overachieving sixth man can keep us in it.” That’s sad.

• OSU is now tied for eighth place in the Big 12 with Texas Tech. Baylor and TCU are below us. Ladies and gentlemen, the Travis Ford era.

• How psychotic did the angry pointy lady look after Smart walked away? Definitely not somebody you want to bring home a B+ to.

• Marcus Smart puns are seriously the worst. Just laziness to the nth degree.

• Speaking of awful decisions, Smart thumping his chest with three minutes left after hitting his fifth three in his last 37 attempts was the second-most egregious thing I saw tonight and No. 1 wasn’t getting topped no matter what. That just totally summed up the season for OSU. And it was a terrible shot and he probably should have been benched for it, too.

• I know this is water and that’s the bridge but I didn’t want to be hearing the words “we’re gearing up for an exciting finish here in Lubbock.”

• How bad was our last possession? The first set coming out of the timeout featured a Nash pass that was shakier than Ben Grogan in an earthquake, three near turnovers and Sager somehow with the ball and 15 seconds left. It was incredible.

And it was the better of our two final sets.

• How was Smart not tossed?

• Markel was kind of bad tonight. He had 8-6-2 but four turnovers and was listless. Of course he was on his 91st minute played for the week, but whatever.

• Speaking of that, I actually started wondering towards the end of the game if a Big 12 player had ever played 100 minutes in a single week. We were a pair of OTs from Markel turning the trick.

• If the over/under is 1.5 on games suspended for Smart I’ll actually take the under. I think the overreaction tonight was pretty strong.

• Of all the crazy things that happened tonight, I thought Kelly Hines being interviewed on ESPN was the coolest. Props to her, she covers the crap out of this crap.