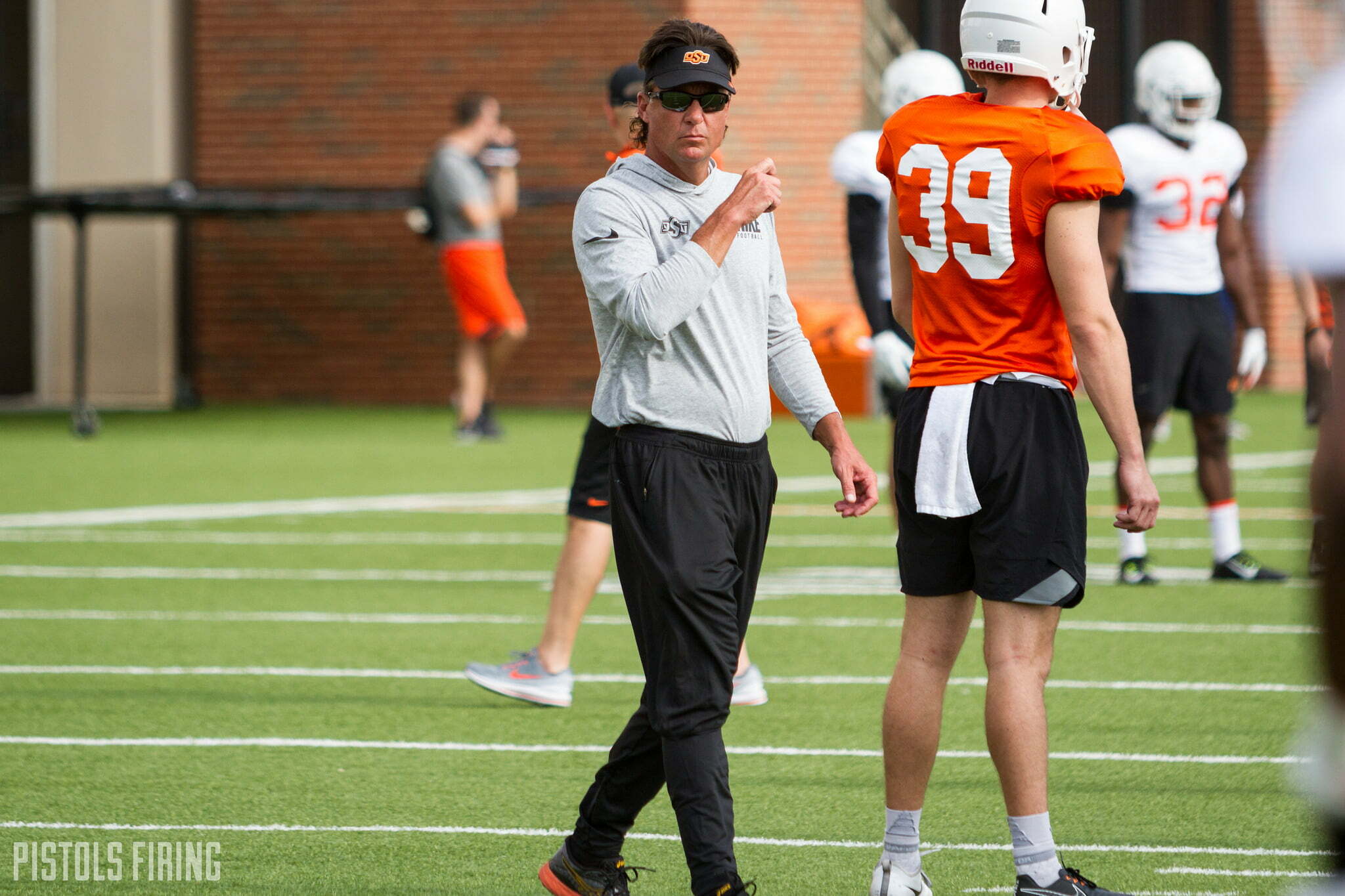 March is synonymous with the madness that college basketball and its consecrated postseason format induces.

While postseason tournament action for most major conferences is gearing into action on the hardwood, triggering that time of year when Jerry Palm, Joe Lunardi, bubble talk and Quadrant 1 wins — wait, what’s a Quadrant mean again? — are all buzzy topics across the office, spring football for most is ramping up, too. And for some, it’s far more interesting. (Especially if, you know, the basketball team you root for kinda stinks.)

Oklahoma State kicks off its spring football camp on Monday, just two days removed from OSU basketball’s regular season finale. If ever there were a better planned PR stunt than that, I’ve never come across it. What better way to move on from a forgettable season than to look ahead to football?

Here are 10 thoughts on what we are watching for.

Look, I’m not going to say I squealed when I saw this. I’m a 27-year-old male. I don’t squeal, OK? All I’m saying is that you should definitely not check my surveillance footage from my home right around 6:59 p.m. on Sunday evening.

I am fired up for everything about this tweet: that Sanders is fired up for spring ball, that he’s rocking ankle sweat bands, which I didn’t know was a thing — but will absolutely qualify him for frontrunner status for the Uni Heisman — and of course the fact that he jacked a PFB-branded pic. My loyalty has been staked in the Prince That Was Promised, Spencer Sanders.

Sanders has some competition, of course. Mike Gundy’s not going to hand him a rod and reel and, oh, also the starting QB job just because he has talent. Super senior Dru Brown has a leg up in the experience category (he outsnapped him last season 1 to 0, just saying), and freshman Brendan Costello is getting some buzz as a guy the coaches love.

Whoever it is that takes the reins at QB after this spring will shoulder a lot of responsibility. Love him or hate him, Taylor Cornelius was mostly solid last season; his strong arm and intimate knowledge of the playbook will be more challenging to replace than many inside the program would probably like to acknowledge.

Justice Hill was one of the most breathtaking running backs I’ve seen don the orange and black. (Sorry, Barry, I was a 90s baby.) Replacing him will not be easy. But uh … *looks around* I’m kind of not that worried about it.

I get it. Sample size is slightly smaller; Chuba was a redshirt frosh, versus Justice as a true frosh carrying a major load. Chuba hasn’t been the guy yet. But I’ve got two strong sources that I’ve relied on for years — my left and right eye — that tell me this dude is going to be splendid as RB1.

The question this spring becomes who will replace Chuba as the No. 2.

LD Brown is the most logical candidate. He amassed 27 carries, 163 yards rushing (6 yards per pop) in a backup-to-the-backup (Assistant to the Regional Manger, RB equivalent) last season. But he’s small.  There are concerns about how he would endure a grinding season. He could be fabulous against UTSA and Tulsa, but when the chips are down against Texas or OU, is he going to pump his foot for 6 yards on 3rd-and-5? I’m not entirely sure.

I really like the three semi-unknowns as darkhorses to replace Chuba at No. 2. Junior college transfer Dezmon Jackson, listed at 6-foot, 203 pounds, has experience and size needed to barrel through a season. Redshirt freshman Jahmyl Jeter has a year in the program under his belt, and at 6-foot, 215 pounds, he has an amalgamation of size and explosiveness that should translate. Then there’s true freshman Deondrick Glass.

The guy who, in committing to OSU earlier this year, declared he wants to win the Heisman as a true freshman.

I don’t know who will win it, but Jackson and Jeter are, in my eyes, the top candidates.

I would never question whether a 51-year-old millionaire who intentionally rocks a mullet, tucks his sweatshirt into his sweatpants, and sometimes randomly breaks out singlets or zebra stripes for promos to sell tickets has lost his touch.

But after a ho-hum 7-6 season filled with tumult, it’s at least something to monitor. The butch wax lost its luster last season, and the shtick, frankly, is only as good as your team (and coaches).

Gundy’s definitely going to rip off 15 consecutive Big 12 titles with Spencer Sanders, Gunnar Gundy and Josh Stewart’s son running the offense before he retires in 2035, but how Gundy handles an offseason with large expectations for a bounceback — all while juggling a potential QB battle — will be fascinating.

4. Question marks for both coordinators

How Princeton-turned-OSU offensive coordinator Sean Gleeson will acclimate to the highest level of the sport will be closely examined and monitored.

How second-year defensive coordinator Jim Knowles adjusts in year two will be all the more fascinating.

Gleeson gets a honeymoon period for a number of reasons, if his offense doesn’t light it up right away. He’s breaking in a new QB. He’s young enough to be my older brother. He’s never called plays at this level.

Knowles, though, has a shorter leash. His defense ranked 117 (out of 129) in yards passing allowed last season, 115th in opponent yards per game allowed, and 119th in takeaways per game — just a sampling/cherry-picking of not great stats — but there is reason for optimism the defense will be better. In year two for Knowles, with an acclimation period in the books, scheme-change no longer an excuse, and personnel somewhat in place, Knowles will have to improve his unit.

5. Opportunity for the big fellas — on both sides

You get the picture.

Junior college run-stuffer Sione Asi is expected to make a push for a starting spot. Young offensive linemen Bryce Bray, Hunter Woodard and others are expected to contribute. It’s all really fluid. But the spring is where they can separate themselves from the mix.

What do Taylor Cornelius, Justin Phillips, Justice Hill, Jordan Brailford and Kenneth McGruder all have in common?

They were all leaders on last year’s team.

Replacing leadership is a question mark every year — such is college, right? Kids move on, they graduate, they go pro, whatever. Sometimes it feels like a stale narrative. But it’s not with this team: Cornelius and Hill were revered by the OSU locker room; Justin Phillips was both experienced, respected and needed by the defensive staff. There are voids that will need to be stuffed with quality guys, and that identification and development process starts today in earnest.

This is a continuation of number six and also a new one. What is OSU? What is the culture? What is the team’s identity? What can it rely on when Texas is up 30 points in the first half? Or when OSU is up 19 in Bedlam?

Last season I guess you could say its identity was reliant upon culture and offense, and we saw how far that got them.

This year, with a new offensive line coach in Charlie Dickey, a revamped and retooling run game, and a new quarterback, I suspect OSU will try to go back to Gundy’s roots: Pound the hell out of teams in the run game and make them pay with physicality.

I guess. But it’s not easy to project, really.

Texas had defense. And a crazy coach.

West Virginia only had a crazy coach.

What will OSU’s be?

Culture will remain a buzz word, because Gundy wants it to be (and it is actually meaningful, even if we can’t quantify it), but developing an identity that outsiders can point to will be crucial.

Including the departure of senior QB Taylor Cornelius, this is how much production on offense is now gonezo…

The chunk of that production is (obviously) Cornelius and (semi-obviously) Tyron Johnson, but pass-catchers are still in need here. If ever there’s a position talented enough to provide a fill-in, it’s receiver, where Kasey Dunn has stacked and developed some of the best talent in the country. But it’s still something to watch here.

For my money, C.J. Moore and Patrick McKaufman are the two guys I think will be buzzed about most this spring (along with a guy named Tylan Wallace). But for Braydon Johnson, LC Greenwood, Dillon Stoner, Landon Wolf and Jonathan Shepherd, playing time awaits who has the best offseason.

9. A plea to fix the worst unit at OSU

If OSU doesn’t have the budget to hire a special teams coordinator — and I lean towards no, considering it’s the most dire unit on the team yet remains coordinated by graduate assistants — then there should be some intimate recalibration and soul-searching to figure out what’s going on here.

OSU was horrendous on special teams last season. Kicking normally-simple kickoffs 30 yards out of bounds and into the seating, mishandling snaps, more kicks out of bounds — it was actually an embarrassing look overall. Gundy is a top-15 coach in America for what he does running the program, the ins and outs, and his Xs and Os, but he needs to shoulder the responsibility of special teams and see its progression through.

I’m higher than most on the secondary for OSU moving forward. I think Kolby Peel and Jarrick Bernard are future All-Big 12ers, and I will not accept any argument. But cornerback — outside of A.J. Green and Rodarius Williams — remain a question mark.

Kemah Siverand will again play in the rotation, JayVeon Cardwell is (again) my pick to surprise this spring and into the summer, and beyond them, there are several other young guns — Gabe Lemons, Thomas Harper — that could become a factor.