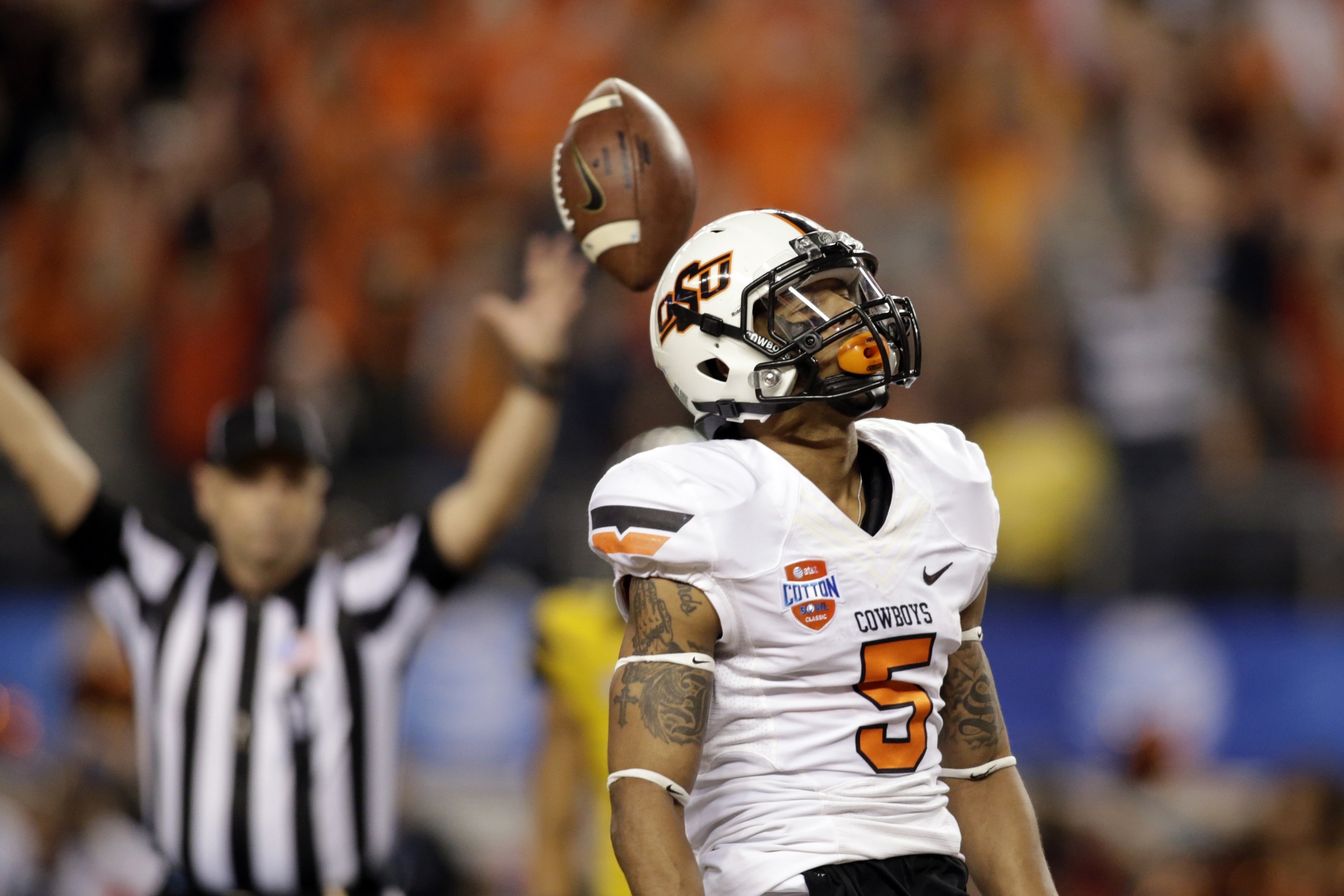 My initial reaction is that I’m bummed out.

Bummed out that Chelf’s adversity-stricken career ended with a fumble-6 and that the second-most passing yards in OSU bowl history will only be remembered as “yep, I knew he was going to go out like that.”

Bummed that an OSU defense which was the Big 12’s best (by far) all season gave up 41 to a QB that couldn’t hit the Colvin Center from Hall of Fame Ave.

And mostly bummed that an amazing season ended with two soul-crushing defeats in the last 120 minutes of play.

But the dirty little secret of this OSU squad is that even though it had probably the best defense in school history, its offense was held together with scotch tape, baling wire, and whatever magic Chelf had in the tank.

I don’t want to hear the “fire Yurcich” garbage (OSU averaged 42 a game over its last seven games) or the “Gundy can’t coach the big one” nonsense. The reality is that this was a flawed team that played out of its mind for about a month in October and November.

The reality is that it ended the season with two losses against two terrific college football teams and sometimes that’s all right.

Real life doesn’t operate like a message board and even though Mike Gundy has built himself a fine little program this isn’t exactly early 2000s USC we’re talking about. It’s a strong school that has won 50 games in the last five years — that’ll do.

If you are who you think you are then you should be playing OU at home for Big 12 titles and the SEC runner up for Cotton Bowls and those games should be coming down to the wire. That you won or lost them doesn’t move heaven and earth for me, especially this one tonight in which OSU was only a two-point favorite.

Sure, would I rather beat Mizzou and see Gundy wear a stupid bowl hat and let Nike slap an even stupider slogan across a t-shirt I can buy at Ross in three years? Absolutely, yes, I would.

Was I nervous during the second-to-last drive before Chelf fumbled? For sure.

Did I have plans to shut my TV off if Grogan even stepped one foot on the field to try and tie up the game? You bet.

But OSU didn’t show up on offense on Friday night and the normally-stellar defense finally crumbled under the weight of having to go 90+ plays against a team built for the grind of an SEC season.

It’s a bummer but there’s no shame in it.

1. I don’t know what the statute of limitations is on joking about Gary Pinkel’s DUI but he might be getting another one tonight after his decision to roll with James Franklin after that Trevor Knight-esque drive from Maty Mauk in the first half.

2. Mizzou’s defensive line was as good as advertised. The problem for OSU (especially in the first half) was how many throws it missed. Its secondary was vulnerable but Chelf couldn’t take advantage and there was just nothing there with the running game.

I told somebody during the game that this is the biggest difference between Big 12 Ds and SEC Ds. Our secondary is elite, maybe the best in the country. And our defensive line is pretty great as well but it’s not SEC great. Those are NFL defensive linemen and ends. So elite, so disruptive, so not what we’ve seen all year.

3. I’m not going to get all crazy about the officiating — mostly because I choose to enjoy life but partly because it’s difficult to criticize Big 10 refs for down-the-field penalties when they aren’t used to seeing anything happen beyond five yards of play other than the occasional stray cheerleader or baton-twirler.

If you want to pin this one of the refs, fine. There was a questionable call or two (the one below being the most prominent):

That’s certainly a game-changer but hey, don’t have your arms draped around the NFL dude beyond five yards and maybe it doesn’t get called either. I do enjoy me a good “Gundy losing his mind” tirade on the sidelines (ok, on the field) after one of these calls, though. Those are unparalleled. Ok, they’re paralleled nicely by Dana.

4. I think Josh Stewart had eight for 80 and a sweet TD in his last game as a Poke. Call me crazy but next year isn’t exactly a Big 12 title-winning season for OSU and those injuries start to pile up for small, shifty WRs.

We can talk about this more later but he doesn’t have much left to prove and why in the world would he bring it up during bowl week (unprompted, no less!) if it wasn’t heavily on the table?

Think what you want but I’m saying he’s gone.

5. I’ll do a uni ranking later this month for the 2013 season but I think the bowl all whites with the alternate helmet are tentatively in my No. 2 slot behind the unis OSU wore for the Baylor game. You guys know I’m a sucker for all white and that helmet is just a thing of beauty.

I also like that OSU has made it a tradition to go monochrome for bowl games. All black for Stanford and Purdue and whites for Mizzou. That’s good stuff. Speaking of, tonight was an all-time helmet matchup. I love the Mizzou tiger helmet. They do some good work for not having any colors to work with.

6. Why were Gus and Charles Davis so obsessed with comparing the football team to the basketball team? I thought that was so bizarre. I dislike those two a lot less than most of you but Davis was talking like somebody handed him an Aaron Sorkin script tonight and Gus never really got going until the fourth.

At least we’ll always have the Jordan Crawford madness!

7. Seriously, how difficult is this to do? It should be worth points, at least two, maybe more.

That’s an SEC-Big 12 problem more than it is an OSU problem. The Mizzou line was just a monstrosity. You can ignore the “SEC is better” narrative all you want but it’s pretty tough to ignore the advantage its good teams seem to have on the offensive and defensive lines.[1. Side note: I had SO MANY SEC tweets teed up for the first quarter and then just…nothing happened. I was more bummed than Gundy, probably.] Losing a lineman to a grotesque first-half injury didn’t help things but it was pretty overmatched from the start.

9. I don’t know that there’s a measurable ratio but that had to be one of the most “exciting fourth quarters to boring first three quarters” ratios in college football in history. A lot like Bedlam, actually.

The first 45 minutes were painful then it’s like all of a sudden in the fourth quarter the Sugar Bowl texted and said “this is a joke, guys, we did better than this in the first five minutes last night” and voila!

10. Ah, you guys know how much I love legacies, let’s talk about Chelf’s.

He finished 10-4 as a starter and was probably the fourth-best QB of the Gundy/Miles era behind Weeden, Zac, and Fields and depending on what Walsh does these next two years. That’s not too bad though with wins in either Bedlam and this Cotton Bowl you could have maybe made the case for him over Fields.

I’ll always remember him as an O-State guy through and through.

I don’t mean that he loves OSU more than the other guys or anything like that, but that his career, who he is as a player is pretty indicative of what OSU is as a school.

A pretty mediocre three-star recruit, sat on the bench for a few years, got a chance (kind of), down, supposedly out, dogged, beat up, comes back, down and out again, back again, takes over the college football world, silenced, skewered, back on top.

We’re never going to be Bama or Texas or anything like that and that’s kind of the fun of it. We’re going to get punched in the stomach against OU and Mizzou and sometimes West Virginia but, like Chelf, you get up and you keep coming and you keep showing up and having fun with your friends.

And that’s it, right?

The thing we’re all chasing isn’t the Cotton Bowl hat or the Nacho Victory shirt. It’s the experience.

And I don’t know about you guys but despite the last eight quarters of disappointment,[1. If you can even call it that.] I had a pretty great one this year.

Hoops tomorrow, back at it.