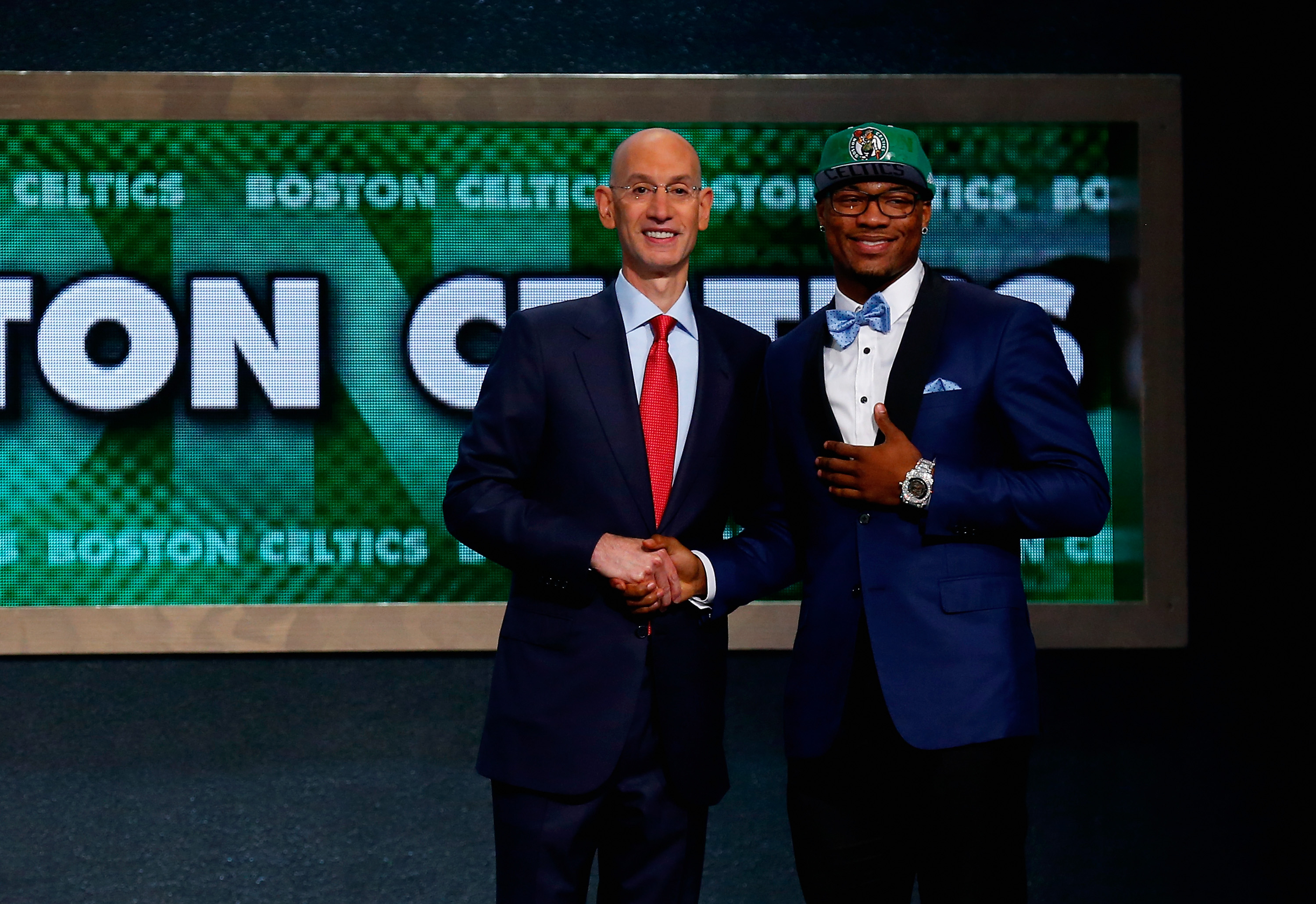 I was riveted by the 2014 NBA Draft for the first round. The Wiggins/Parker/Embiid drama was terrific and I wanted to see if Marcus would slide to a team that could use him.

Well he didn’t slide and I’m not even sure he went to a team (the Celtics) that can use him. Markel Brown went to the Brooklyn Nets about 93 hours later which makes him the youngest dude on that squad by a couple of decades.

1. Markel to the Nets: Not sure what to think about that one. They have over $50 million worth of guards already on their roster for 2014-15 not counting Shaun Livingston. So what is he going to do? Backup Deron? Backup Joe Johnson? Participate in dunk contests with Marcus Thornten? I want to see that play out a little bit — I’m not convinced that’s a good landing spot for him.

By the way, there was a bit of confusion on the Twitters after Markel got drafted. He was selected by the Timberwolves but traded to the Nets for $1 million so at least we know Mikhail Prokhorov has YouTube in Russia.

I’ve never been more proud of a tweet, just so you know:

I feel like some team is going to take Markel, get him into camp, watch him, and feel like they just pulled off the Louisiana Purchase.

2. Ford to Stevens: Bears repeating. Going from Travis Ford to Brad Stevens is like dumping your high school lover for Kate Upton and never looking back. Stevens is going to pass out when he watches how hard Smart works and Smart will be better for having a coach who will actually tell him when and when not to shoot (or maybe not).

Coach Brad Stevens on Marcus Smart: "Everyone loves what he brings to the table. We had him ranked really high."

.@OSUAthletics is the first school to have a top-10 pick in both the NFL & NBA drafts since 2009. #OkState

4. Bill Simmons’ thoughts: I was interested to see what Simmons (a Celtics fan, did you know that?) thought about the pick. Here’s what he opined about Smart shortly after the pick:

[yelling] “Are you competitive? Are you a gym rat? Do you love basketball?”

The answer, as he noted thereafter to all of those questions about Marcus Smart — or should I say Maaaahkkkkiiiis Smaaahhhhht — is yes. Safe to say he was pleased.

5. Smart’s agent is immense: Somebody else mentioned it on Twitter but Smart was all over the place leading up to the Draft (and . I don’t know what kind of deals he has lined up (if any) but he (and he, by the way, is Lee Melchionni of the 2006 Duke team) did a tremendous job of aligning Smart with pretty much every company possible leading up to the festivities.

6. This chart is so weird: I mean in my head I knew this was what it looked like but it’s weird to see it on paper.

7. Andrew Wiggins seems like a child: I don’t mean that in a bad way, either. He just seems like he loves hoopin’ and would have been grinning whether he went to Cleveland at No. 1 or was the last pick in the draft.

I agree with this scout that he doesn’t have much “eff you” to hime but maybe he doesn’t need it with Kyrie and that crew.

Related (I think): Philly’s alternate universe team is incredible. Injured Embiid, injured Noel, James Anderson…errr…Michael Carter-Williams. But really, are they planning for 2030 or what?

8. Marcus’ (probably) unintentional snub of Bill Self was the best moment of the night: Easily.

This was cool, too.

How great is Marcus Smart? Maybe happiest moment of his life and spends his interview talking about Isaiah Austin. All class.

9. NBA outlook: We can talk more about this later but I’m not convinced either one of these guys is going to be a good pro. Markel is limited by the fact that he doesn’t really have a position and Marcus…well…he kind of is, too.

Both can defend, though, and if they fan find a spot that values elite defending (for Markel, this will be off the bench and maybe as an energy guy on offense) and for Marcus, playmaking at the rim (see chart above) they can be successful.

I feel like the things both of them did well in college — Marcus being stronger than everyone and Markel jumping over everyone — don’t necessarily translate to the NBA though I am interested to see if Markel can start creating his own shot).

I hope I’m wrong though — hey when Markel is getting minutes for the 2018 NBA champion Spurs feel free to remind me that I said this — and I don’t mean to sully a great night. Maybe I just watched them too much and saw too many of their flaws.

You could talk me into Smart being a 6th man on a conference title team and Markel getting minutes for a playoff team, I think. I’m just wary of lauding them as “next” just because they spent a few years in Stillwater.

Only time will tell.

I wish I could get drafted every year. Such a great feeling, congrats to all the fellas and good luck to the rest

I can’t imagine what it feels like to be drafted and I’m excited for both of these guys. They emptied themselves — of all the dudes we’ve had in the Ford Era they probably did so the most — on the GIA maple and I hope this night was at least some payback for that effort.

A job well done with so much road ahead.

PS: I’m taking the morning off so I’ll have an afternoon Bullets for you guys to get you to the weekend. If you know anyone who wants to sponsor PFB, tell them about this post.