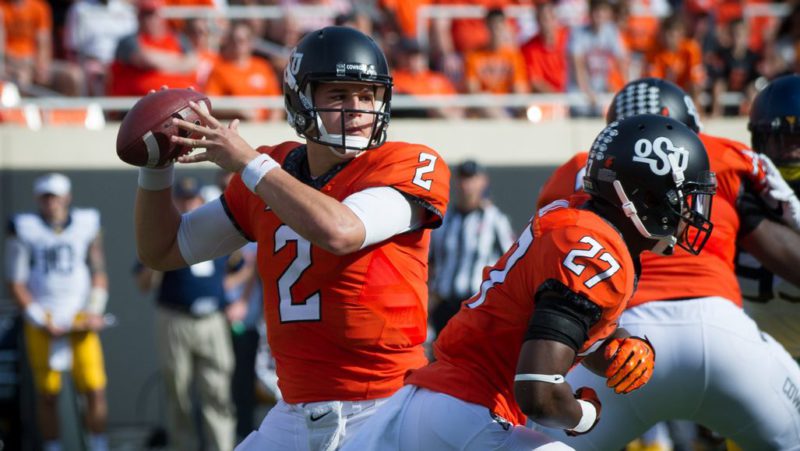 We finish up our series of position previews with the most important single position on the field.

Heading into 2017, the Cowboys are almost as set at starting quarterback as they are at head coach. Mason Rudolph is coming back for his senior season which provides OSU football fans their biggest reason for optimism. He’s likely one of the five best pro prospects returning at the QB position next season. If his constant improvement over the last two years is any indicator, Rudolph could become a household name in 2017.

We could spend an entire post on Mason Rudolph’s career so far and where he may end up among OSU quarterbacks. In fact, I already did. So let’s take a look at his backups and the options OSU has at the future at the position.

First, let’s take a look at who’s currently on campus. Taylor Cornelius came in with Rudolph as a freshman in 2014. When Daxx Garman was ruled out for the Baylor game, there was actually some discussion as to which of the two quarterbacks’ redshirts should be pulled — especially with only a couple of games remaining. Gundy went all in turning Rudolph loose and the rest is history.

What does The Oil Baron have going for him? Three-plus years in the system and knowledge of the playbook — plus apparently  if you ask David Glidden, he can sling it.

If Mike Gundy were inking his depth chart today, I would expect Cornelius to remain at No. 2. If you asked him which backup QB on the roster he’s most excited about (excluding incoming freshman Jelani Woods), it would likely be freshman Keondre Wudtee — who redshirted in 2016.

Wudtee’s got good arm strength and he’s athletic. After putting on a little weight with a year in Rob Glass’ program, he should be ready to light it up in the spring game. Behind him, John Kolar is entering his third year in the program and could be an option if needed. Freshman walk-on Josh Green rounds out the rotation.

As part of the 2017 recruiting class, the Cowboys welcome an exciting prospect in 6-foot-7, 230-pound quarterback Woods. The three-star early commit turned down offers from the likes of Michigan and Louisville to come to OSU.

As an early enrollee and a likely redshirt candidate, Woods will get basically a year and a half to learn the system and take advantage of the Cowboys’ renowned strength and conditioning program before he’s in competition for reps.

“He’s a winner,” said Yurcich “all around good athlete and a hell of a basketball player. He won the state title his senior year of football, so he’s really just a game player. He has a big arm. He’s a smart, intelligent kid that can also run very well. He runs with strength and power. Speed is good in the open field. From a physicality standpoint, he has tremendous growth potential, and he has a tremendous work ethic. He’s a solid individual, high-character kid, who will grow into a tremendous prospect.”

Tracin Wallace was setting records as a quarterback for South Hills High School in Fort Worth, Texas before two major knee injuries stalled his production and lowered his recruiting stock. His twin brother Tylan is the top-rate wide receiver prospect to enroll at OSU since Dez Bryant.

Mike Yurcich on Wallace, “He got hurt his senior year and battled through injury and was rehabbing. He’s a winner, another high-character kid. Tremendous athlete. He continues to make plays, can run the ball very well but can throw it very accurately. He’s an accurate thrower. I’m excited about what he brings, all the intangibles. Tremendous leadership. His versatility really sets him apart.”

There was some question as to whether the Cowboys were even looking at Tracin as a quarterback when they offered. But now that he is officially signed, they have him designated as a QB. Time will tell if he competes for reps behind center or moves elsewhere. Either way, he’s athletically gifted and should make a name for himself separate from his blue-chip brother.

There shouldn’t be much in the way of drama at the top of the chart — as long as health doesn’t become an issue. It will be interesting to see how reps are split up when a backup is used. For Gundy and Co., it will be all about getting guys reps and trying to get a head start on building next year’s depth chart.

This amount of depth at quarterback is not something Mike Gundy and his staff likely take for granted. There was a time — not so long ago — when filling out the depth chart was a week-to-week chore. One of more of these guys  probably will end up transferring. But at this point, OSU has plenty of options heading into the future.