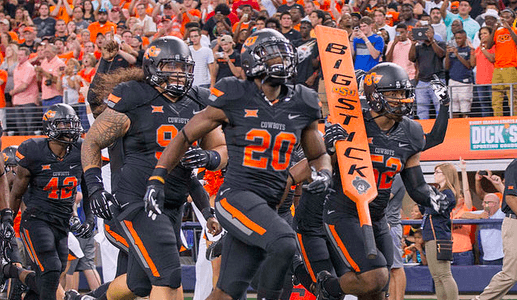 Carson Cunningham, Justin Southwell, and I are going to do a weekly roundtable this year breaking down OSU’s uniforms from the week before. Here’s our first foray.

Porter: I was a little disappointed to see the all blacks on Saturday night. OSU won the uni matchup over FSU the same way USA Basketball wins its Olympic qualifying games but I was expecting the debut of something special — especially on that stage.

What’s something new you wanted to see?

Carson: Even though all black is my No. 2 combo, I was disappointed as well. There will never be more eyeballs on OSU than that game. Mike Gundy claims they will wear new stuff, and that was a chance to debut the strongest addition.

I was hoping they would tweak the uniform template in general. They’ve had these uniforms since 2011. Oregon updates theirs about every year. Two years at most. 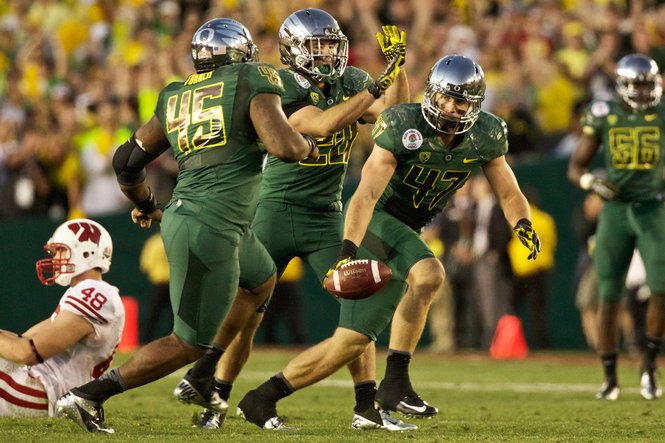 I want to see new/flashier numbering, new stripes on the pants/sleeves and some chrome helmets. Go full-Oregon.

Southwell: It seems like we change the template every five years, but I’m also ready for some new stuff.

I think for this game, it was about as good as we could have hoped for. Everyone loves the all black combo. The majority of the players don’t know what we will wear until we step into the locker room before the game, and there’s a different level of excitement seeing all black waiting for you in your locker.

Tyreek had that gray shirt underneath and was the fastest player we’ve seen since the gray blur against West Virginia. 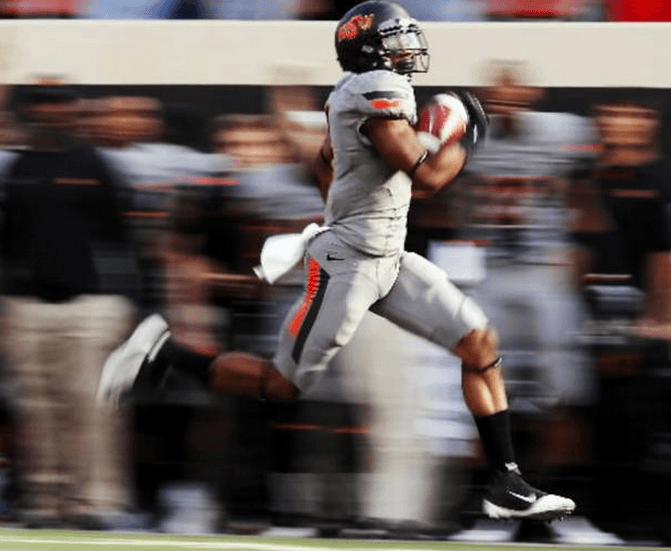 The game had a bowl game feel to it in that combo. If you want to save all blacks for a bowl game, you might not get a chance to see them if you’re the visiting team.

Also, being undefeated in the all blacks was just another way of pulling out all the stops vs. Florida State. I can’t think of a better combo for the season opener on that stage.

The undershirt is the most underrated of all auxiliary equipment items. I remember when I was playing softball in college I started wearing a 3/4 undershirt with the sleeves cut at the forearm because that’s how Troy Tulowitzki wore it.

Tyreek’s went pretty hard on Saturday. I’m not sure if it was “Desmond Roland at Iowa State in 2013” hard but it was hard.

By the way, what in the world was going on with FSU’s threads?

Carson: I’m not seeing Tyreek’s sleeves? Did he cut them off or did they fly off on a return? 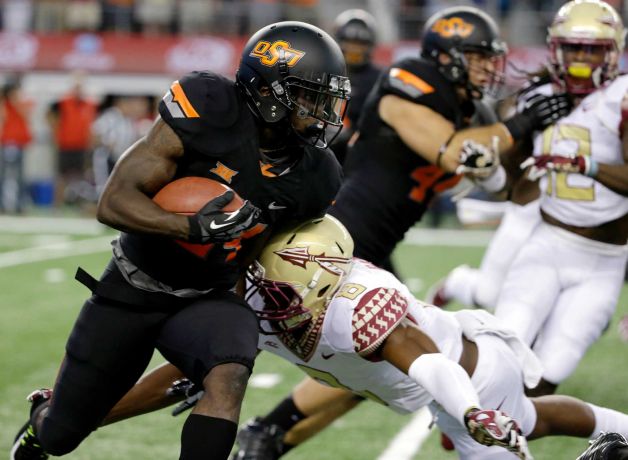 Anyway, it seems the Allen Iverson Sleeve is a growing trend on the team. Lampkin used to be the only one but I noticed several Saturday night. 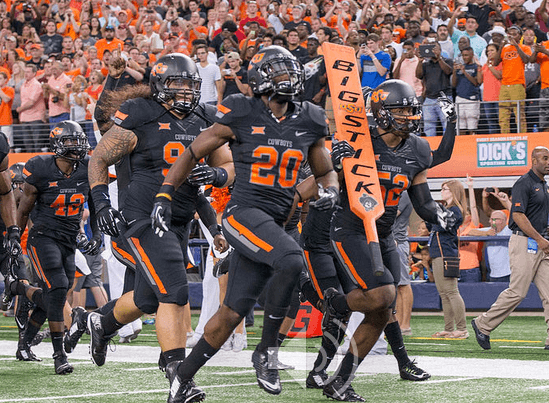 As for FSU, let’s pour one out to commiserate the loss of one of college football’s greatest uniforms:

They messed with a Mona Lisa. Everything about them was horrible: The helmet was more light yellow than gold, the gold numbers on a white jersey were invisible, 1-2-2 combo was bad and the facemask was purple-pink!

It was a catastrophe. 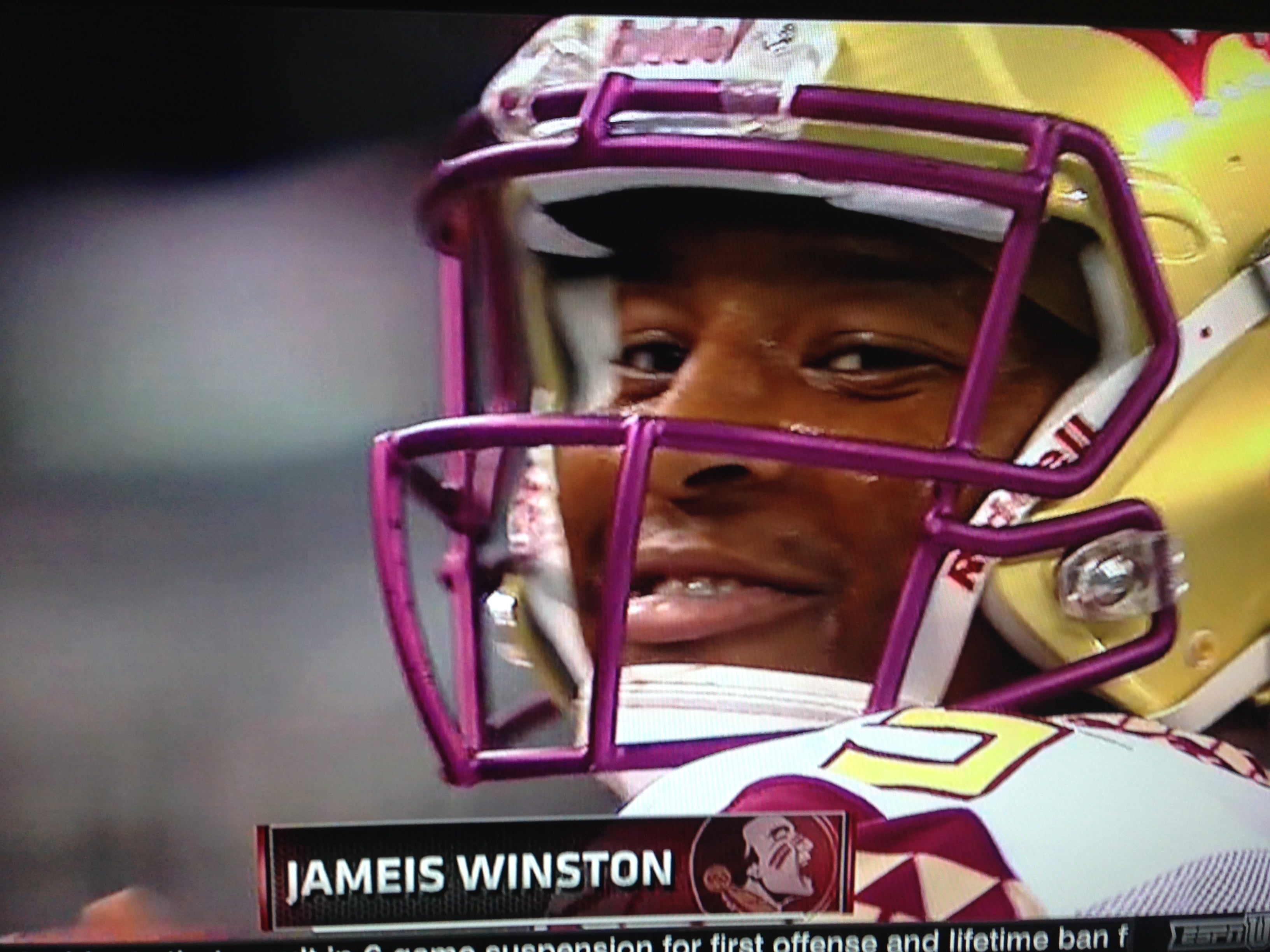 FSU’s threads are my favorite uniforms in the country and they are ruined. I’m still in mourning today.

Southwell: I can’t believe how so many people said they liked their uniforms! Sure, the design on the jersey was unique and cool, but everything else was awful compared to what they have worn in the past.

Everything Carson said > I was a huge fan of their old helmets, especially at the end of the season with all of the tomahawk stickers.

But now their facemask looks like a shade of lipstick; it’s weird.

White pants? I’m guessing someone on the equipment staff said, “Let’s wear our worst combo for the first game and get it out if the way.”

Carson: What do you guys think Gundy was alluding to on uni changes? More Silly Petes? What’s your uni prediction for this week?

Southwell: That’s all I can think of…different helmet logos on various helmets, maybe adding a stripe to the orange or black helmets as well. I’m really hoping for a black OSU logo on the orange helmet, stick a black facemask on there too.

I think this week will be something we haven’t seen yet, but pretty simple for the home opener: White (alt. with stripe)-Orange-Orange

Carson: An orange helmet with a black brand and face mask is a necessity. The orange helmets have been disappointing up to this point.

I bet they keep it simple for Missouri State. But please, anything but White-Orange-White. Hoping for Black-Gray-Black, predicting White (regular) Gray-Gray.

Porter: One thing that Oregon has going for it that OSU doesn’t is that its throwback colors aren’t colors shared by anybody else in the conference.

I think a chrome helmet might be on tap and I think OSU should do with the bucking cowboy what Oregon did with the Disney duck: 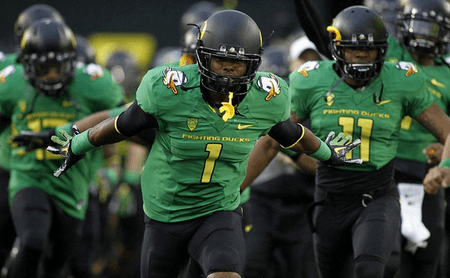 Bring me all of that uniform.

I’m also hoping for an orange helmet with the stripe a la this era: 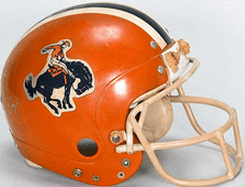 As for Saturday I’ll say white (alt.) orange-gray. That’s more me hoping than anything, though.

Carson: Your idea nearly made me pass out, Kyle.

Since they can’t do an alternate orange they need to embrace the “silver.” That’s the official school color and what they call the gray unis.

Silver/chrome helmets, silver numbers. Give me all the glitz and flash.

How tight would silver/chrome helmet, orange jersey (silver numbers) and gray pants be?

Bucking Pete on the helmet would be the cherry on top.