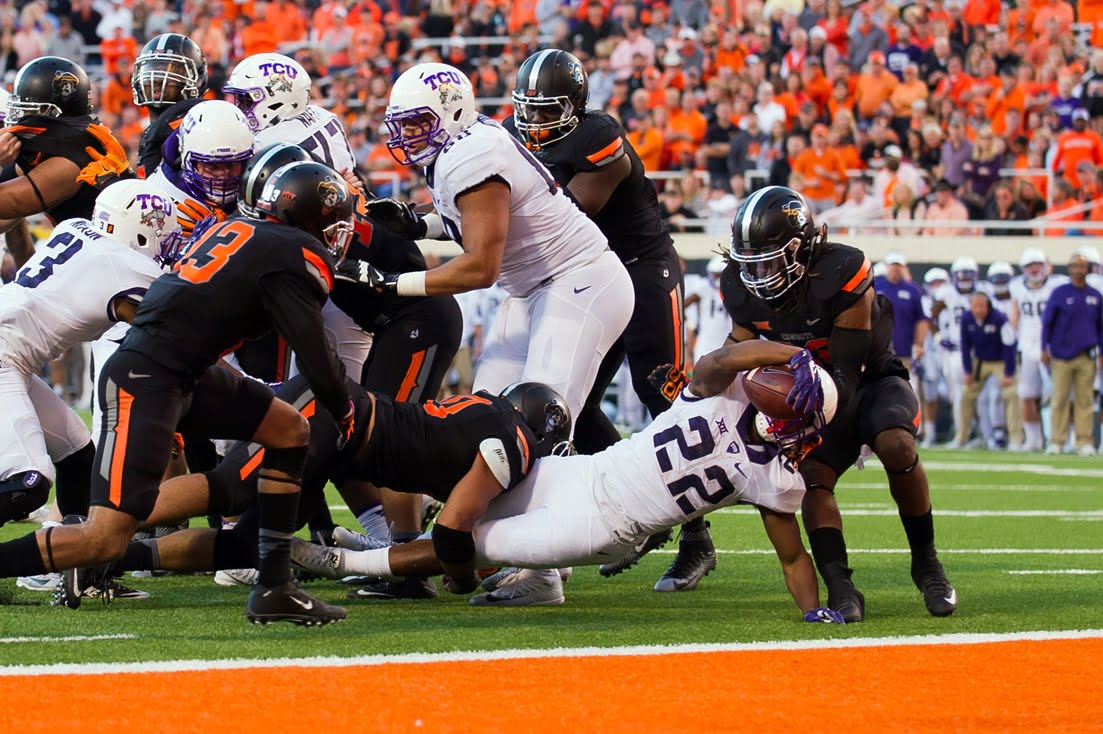 Carson Cunningham and Justin Southwell joined me to discuss Oklahoma State’s 2015 uniform combos as well as the rest of the unis we saw around the country. Here we go.

Carson: It’s fun to go back and look at all of them in retrospect. Some are better than I remembered, like the Black-Black-Gray worn vs. Central Arkansas. I deliberated on that combo and the All-Black, Everything’s worn vs. TCU.

Instead, I’m going with Chrome Pete-White-Black worn at Texas. When OSU switched uniforms in 2011 they wanted to be the “Oregon Of The West”. OSU’s uni’s are more toned-down than Oregon[1. Which is as big of an understatement as saying Donald Trump is more conservative than Bernie Sanders.] but this one can at least hang with the Ducks.  I would like to see a chrome brand eventually, but the orange chrome helmet has really grown on me. I’m sure there will be disagreement, but this one jumped off the page when reviewing all of the looks.

Porter: My favorite combo was the WVU one. Second-best helmet, best pants and the jersey is solid. It’s such a strong look. I think OSU first wore it at Baylor in 2012.

Although, I could be talked into some different face masks on the carbon fiber helmets. I’ve never been a big face mask guy until this season. I’m not sure why, I just started noticing them more this year. Southwell: I have to say my favorite combo for this season was all black vs TCU. I’m still not a huge fan of the Pete logo on helmets, and I’m not even sure it’s growing on me, but it seemed to go well with this combo. I don’t know what I’d do if there was a chrome OSU brand on that black and chrome helmet. I also really liked the W(alt)-O-W vs UTSA. It’s just tough to beat that mean look of all black.

Porter: What are we hoping for in the bowl game that we haven’t seen yet?

Carson: I hold out hope OSU can go color vs. color if need be. Black, Gray, Black. I’ve wanted to see it since 2011. Give me a Chris Knox photoshop and soak it all in: I’ve also never understood why gray jerseys can’t be worn on the road. That’s a terrible rule. We need some more gray in our lives. Gundy even admitted at a press conference this year:

Where are we at in society today? Give the thoroughbred recruits what they want. You need more horses in the stable.

Southwell: I would also love to see that combo, but I’d be really surprised if we saw the gray jersey in a bowl game. If we’re the home team, I would imagine we would wear a black jersey since that seems to be the trend. My favorite combo is B-B-O, so it would be cool to see that. But if it has to be a combo we haven’t seen yet, I would want to see Orange-Black-Gray (though I’d really like to see it with the other non-chrome orange helmet with a black brand logo and black facemask).

It’s harder to pick a combo for if we’re away because it seems like we’ve seen about every decent away combo besides O(C)-W-O. Let’s go all out here. Take the white logo from carbon fiber and stick it on the black helmet. Pair it with a white jersey and black or white pants.

Porter: Carbon Fiber, black, gray would be incredible. I’ve always like the white helmet with the black brand for the bowl game (like the 2014 Cotton Bowl). So I’ll say that or the throwback Homecoming helmet, white jerseys and orange pants since it’s not been determined that we’re the visiting team. I think that would go pretty hard.

Carson: Now that we know OSU is the road team, I’m calling for Black (Chrome-Pete), white, gray. Let’s get weird.

#SEC is the home team for this year. https://t.co/JSMUYRphmX

Southwell: I say we go full sugar. All white with the alternate white helmet like we wore for the Cotton Bowl vs Mizzou.