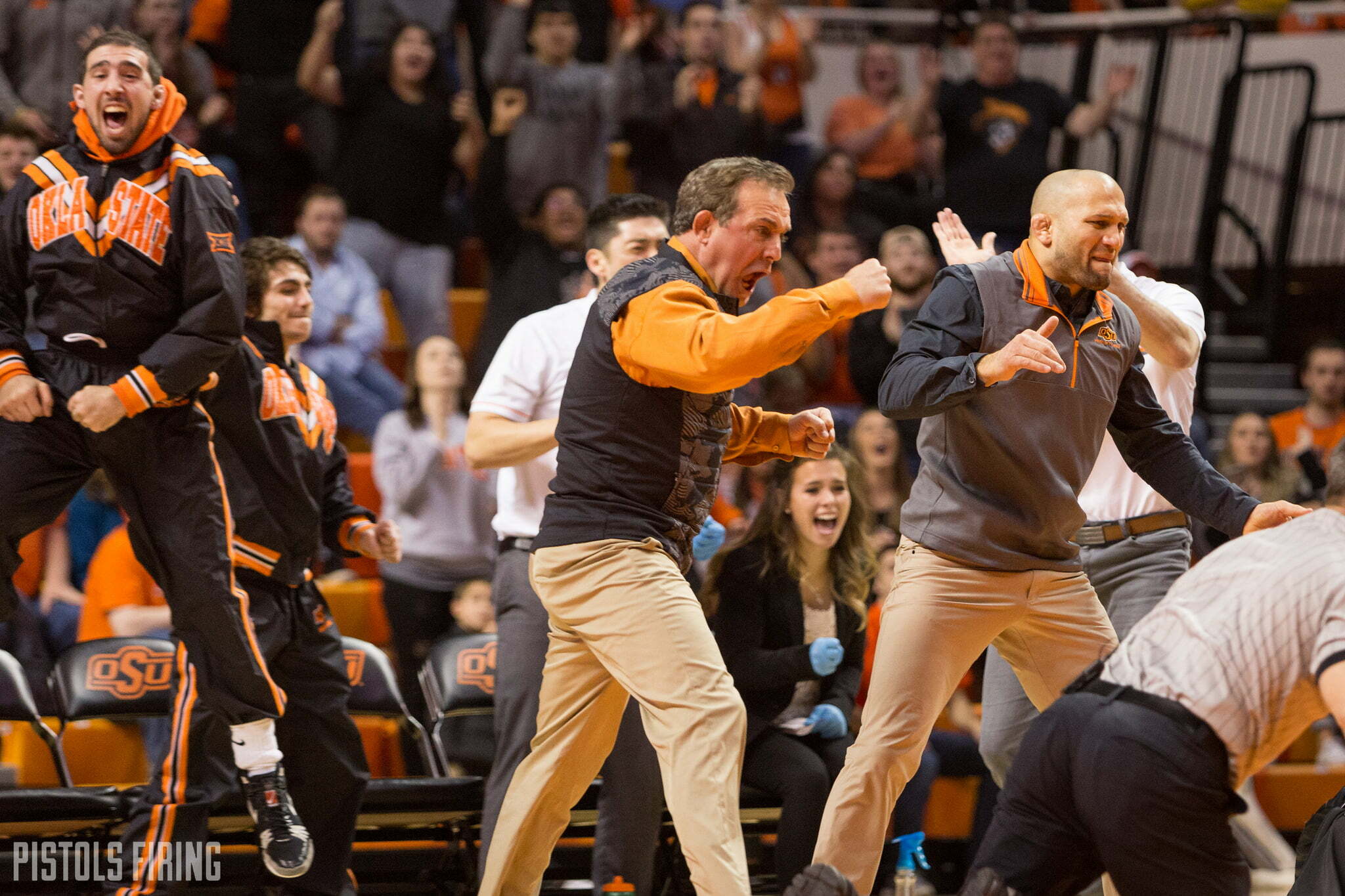 We looked at Part 1 yesterday, but now let’s delve into some of the upper weights.

At 165, again I don’t know for certain this will happen, but the plan is to have Chandler Rogers here according to Flo via OSU staff. After a few tough losses, Chandler is only currently ranked 9th this year but did finish 5th last year at the NCAA tournament and there are a few seniors ranked in front of him that clear out. If he can develop this year into a high finish at the NCAAs, which he’s really came on lately and been pinning everyone, you could easily project him to be a top 3-4 guy at next year’s NCAA tournament. There’s also debate and discussion that Joe Smith may be here, which you’d probably expect a similar projection as you do with Rogers minus the bonus points as Joe isn’t the pinner Chandler is.

At 174, there is the potential for the Joe Smith weight bump to force Rogers up here, who would be solid, but based on what the staff has said, you expect Jacobe Smith. The top two nationally at this weight are elite, but there are about six seniors currently in front of Jacobe that will clear out and he’s had wins over the No. 4 guy at this weight, so even though he took a lump or two early this season the talent is there for him to finish on the podium this year and even higher on it next year.

In a lot of ways 184 is going to be the biggest concern next year. Some of our great readers have commented on here that they think the lineup will bump, as we’ve indicated, which would move Jacobe up here. And it definitely could happen. But, again, that is not what the staff is currently saying. I personally think Jacobe is a pretty small 174, so I feel like that transition would be tough, but it is definitely a possibility. If not, then I think you’re probably looking at one of three other things here.

1. Keegan Moore returns as the starter. Keegan’s not a bad wrestler but has been very up-and-down and seems to gas out in a lot of matches. His effort has been questioned and Coach Smith even gave an indication as though he may kick him off the team. If you watch some of the body language of the staff during matches, I do think Chris Perry has taken some extra attention to him and is working with him to shake some of that off.

2. Andrew Marsden wins the job at 184. A number of fans are already clamoring for this to happen, but we’ve yet to see it. Our beat writer Luke Garza has tried to poke around to figure what the plan is at this weight, but we’ve had a difficult time getting much concrete info on it. It could be that the weight pull is tough for him and he’s just not winning in the room. It could also be that since he won’t have the RPI to get an automatic qualification for the conference tournament, that they think Moore is the safer bet. It’s really tough to know. For what it’s worth, Luke did mention to me that his Uber driver told him that Marsden said Smith doesn’t even tell them who will start until right before the match, so I’m not 100 percent sure Moore or Marsden know.

3. Blue-chip recruit Travis Wittlake comes up to 184 and starts. The kid is a stud and has the talent to come in and compete as a true freshman. He would probably be a fairly small 184, though. He currently wrestles at 170 in high school, so this would be a jump for him. Would the staff pull the trigger if it means a title for OSU? Who knows?

At 197, Preston Weigel looks like a legitimate NCAA title contender at this point in the season. Coming off of injury, he’s comfortably handled five of the top guys in his weight class so far and only has one loss in a match where he wrestled hurt but was in control for most of the match. If anyone watched the Kent State guy he beat the brakes off of a few weeks ago, that is a top 20 guy. Wilcke from Iowa that he dominated is top 5, the WVU kid. The NC State kid. All guys that Weigel manhandled. His top game is off the charts and now he has some legit offense on his feet.

Weigel’s currently ranked 5th, but I believe he can go with anyone at this weight. Transitive property doesn’t always apply in wrestling, but he beat the Iowa kid 6-0 and the Iowa kid made his match with No. 1 Kollin Moore of tOSU interesting losing 6-3. He could win it this year and the current guys sandwiched around him in the rankings are pretty much all seniors with the exception of Moore.

As a wrestling fan the bump of heavyweight Derek White has been one of my favorite things to follow this season. In every match you can legitimately see him making adjustments and improvements to the big boy style. White has only dropped two matches this season — one early in the year where he struggled to get out from bottom, and a bit controversial, but really exciting, one in OT at Iowa to 3rd-ranked Stoll.

Based on current rankings, if the seniors simply clear out White would be No. 5 in the country preseason though there is an incredible high school heavyweight coming in next year that will immediately be in the top 5 conversation. Based on the current trajectory of what I’ve seen with White I think he can be an All-American this year and can go with any of those guys that will be around the top 5 next year.

What does this whole book I just wrote on this topic mean to you all as fans?

OSU has a really good shot at a NCAA title next year if you see improvement and development at some of these key weights through the rest of this season.

Ohio State is my pick to win the NCAA title in March, but they graduate a lot. They’ll reload, but shouldn’t be a factor next year.

Penn State could win in March, but they are bad at their lower weights and graduate an absolute freak in Zain Retherford at 149. They won’t be good at 125, will possibly plug in a freshman at 133, will be decent at 141, but as mentioned one of OSU’s current redshirts has a head-to-head win there. They’ll plug in someone decent at 149, probably Jarod Verkleeren but won’t have the production they did with Zain.

It will be a battle, but OSU’s depth could definitely outdo PSU in an NCAA tournament without Zain Retherford’s production. Development,and progress from these guys throughout this year and into next are absolutely huge. If you’re seeing a guy like Derek White, Jacobe Smith, Nick Piccininni, or Chandler Rogers finish top 5 at the NCAA tournament, that’s great for this year but even better for next. Even though it probably won’t win Oklahoma State a title this year, that is absolutely huge for this program. If you see Brock and Weigel go make the NCAA finals or Keegan Moore make the blood round of the NCAA tournament, you should be really excited about the future of this team.

The thing with this season and into next is PSU is set with four to five studs and maybe two young guys that could make an impact next year, but as a whole there isn’t much room for them to grow or improve like OSU can. Maybe at one or two weight classes.

If you can project NCAA finalists for OSU at 125, 133, 141, 157, and 197 (which you very possibly could) to counter PSU’s four NCAA champs, the depth behind OSU with all the other guys would likely push the Cowboys on to the top of the podium next year.