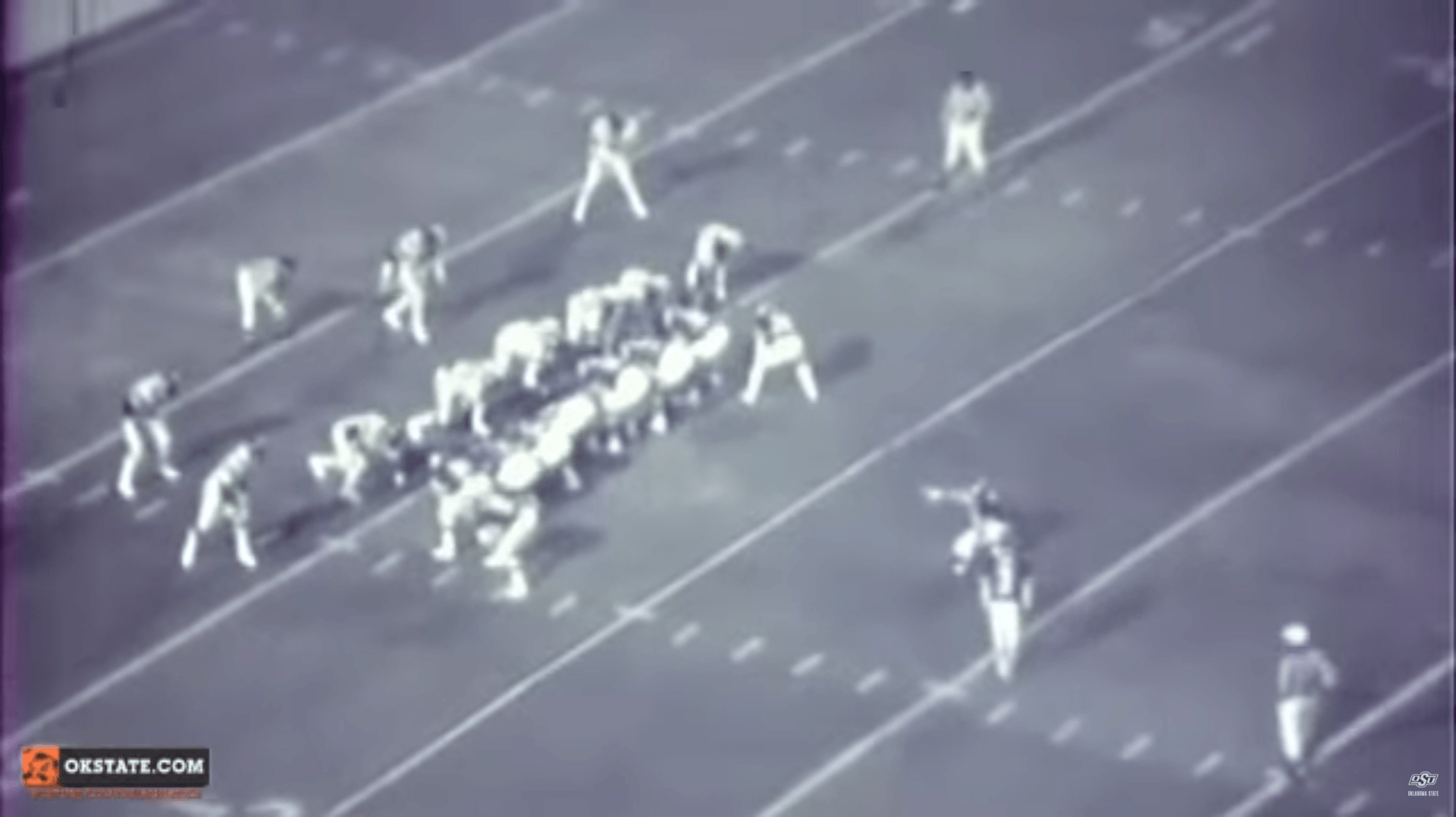 When Oklahoma State and Texas A&M face off in Houston on Dec. 27 in the Texas Bowl it won’t be the first time the two schools have met in the postseason. The Cowboys unfortunately suffered their second ever bowl loss to the Aggies on a chilly night in December 1981 in Shreveport, Louisiana.

Let’s peer back a few decades and look at the last time these two teams were bowl partners. I’ve got some observations, interesting tidbits and notes. I’d call this a rewatchable post, but there’s not a ton you can glean from the footage below. It’s included for posterity (magnifying glass recommended). The video looks like it might as be from 1881.

You have to go back nearly 40 years to a time between the two schools sharing conference affiliations. The Independence Bowl is still played in the same Independence Stadium in Shreveport, Louisiana today that it was in 1981. The same one that OSU beat Bama in when they returned to the bowl series in 2006.

A 7-4 Oklahoma State squad, then in the Big Eight, met 6-5 A&M team hailing from the Southwest Conference. OSU, in its third season under Jimmy Johnson, tied for third in the Big Eight while the Aggies were fifth in the SWC.

OSU and A&M spent a combined 26 years in the same conference (twice). Both programs were members of the Southwest Conference from 1915-24 before OSU left for the Missouri Valley Conference, and then they were reunited when the Big 12 was formed in 1996 until A&M bolted for the SEC following the 2011 season.

I like to think that a certain come-from-behind OSU win in College Station broke the Aggies’ spirit and sent them packing to SEC land. In that 2011 game — the two programs’ last meeting — Brandon Weeden threw for a then school-record 438 yards and two scores with Justin Blackmon adding 121 yards himself.

But the game we’re reviewing today featured a much less potent OSU offense, as you’ll see. Let’s jump into it.

The Cowboys got on the board early after recovering a fumble at the Aggie 25-yard line that OSU running back Ernest Anderson would pay off with a 1-yard touchdown to put the Pokes up 7-0.

An aside: In contrast to the 2019 Cowboys, the 1981 Pokes ran a RB by committee approach with Shawn Jones and Ernest Anderson each finishing in the top 10 in Big Eight rushers that year. The two combined for 1,466 yards and five touchdowns.

A further aside: Chuba Hubbard has 1,936 yards and 21 TDs in 12 games. OSU totaled 70 rushing yards on that chilly December night in Shreveport. Chuba has three runs of at least 70 yards this season. The good ol’ days when they used to run the ball.

The Aggies answered with a field goal of their own before All-Big Eight kicker and OSU record-setter Larry Roach (who led the nation in made field goals that season) hit a 42-yarder to put the Cowboys up 10-3. Unfortunately, he would be outdone by A&M kicker David Hardy who made four FGs on the day including a 50-yarder. Hardy’s 16 matched the Cowboys’ scoring total as a team.

But after the second Hardy kick, OSU was still up 10-6 midway through the second quarter. That’s when the Aggies went full Mike Leach. A&M threw a pair of TD passes of 50 and 38 yards in the last three minutes of the period to go up 20-10 at halftime. Both of those came off the arm of Aggies quarterback Gary Kubiak (now the veteran NFL coach) and were hauled in by wide receiver Jimmie Williams. He came into the game with just nine catches and one TD all year.

OSU dealt with injuries to its running back group. Anderson left the game in the first quarter with a pulled hamstring and Jones was already hobbled with injury the week before. OSU could not recover from those two quick scores and was without two of its best playmakers to do so.

A late touchdown by backup tailback Vince Orange (could there be a better name for an OSU rusher in 1981?), and subsequent unsuccessful two-point attempt, pulled the Pokes within 26-16 before the Aggies scored another TD in the last minute and a half of play to seal the win. That late Aggies TD was run in by Johnny Hector who went on to play 10 seasons for the New York Jets.

Kubiak finished 15-of-20 for 225 yards and two scores to no interceptions, topping Cowboys QB Rusty Hilger (14-of-35 for 187 and a pick). Williams’ five catches totaled 118 yards and resulted in two scores. OSU’s leading receiver was Mark Cromer, who had five catches for 73 yards receiving.

The Aggies really took advantage of the Cowboys’ renowned defense on the ground, chewing up 223 rushing yards. (Again, Chuba has hit that number three times this year on his own.)

This excerpt from The Oklahoman‘s recap summed up the thrashing the ninth-ranked defense in the country took from A&M.

The Cowboys came into the game with respect for the balance of Texas A&M’s offense. They undoubtedly felt even stronger about it afterwards when the Aggies had rushed for 223 yards and passed for 225.

(I’m sure even a 14-year-old, and uncommitted, Mike Gundy swooned.)

I, myself, swooned when thinking about the helmets the Cowboys wore. Those black brand lids inspired what is still my favorite throwback Homecoming offering from OSU’s vaunted equipment staff.

The Cowboys wore white jerseys against A&M but here’s a look at the kit.

This was Jimmy Johnson’s first bowl game as a head coach and one of his two at OSU. He would win the 1983 Bluebonnet Bowl (now called the Texas Bowl) over Baylor. A&M head coach Tim Wilson was fired following the win, but also a 21-19 four-year tenure. The Aggies went the way of the Cowboys they just defeated, hiring Pittsburgh head man Jackie Sherrill to replace him. When OSU hired Johnson in 1979 he was assistant head coach and defensive coordinator at Pitt.

This game would be OSU’s second ever bowl loss. The Cowboys were 5-1 in the postseason coming into this matchup, but are 14-9 since. Let’s hope the second time these conference fellows turned conference foes meet in bowl season that we get a different result.