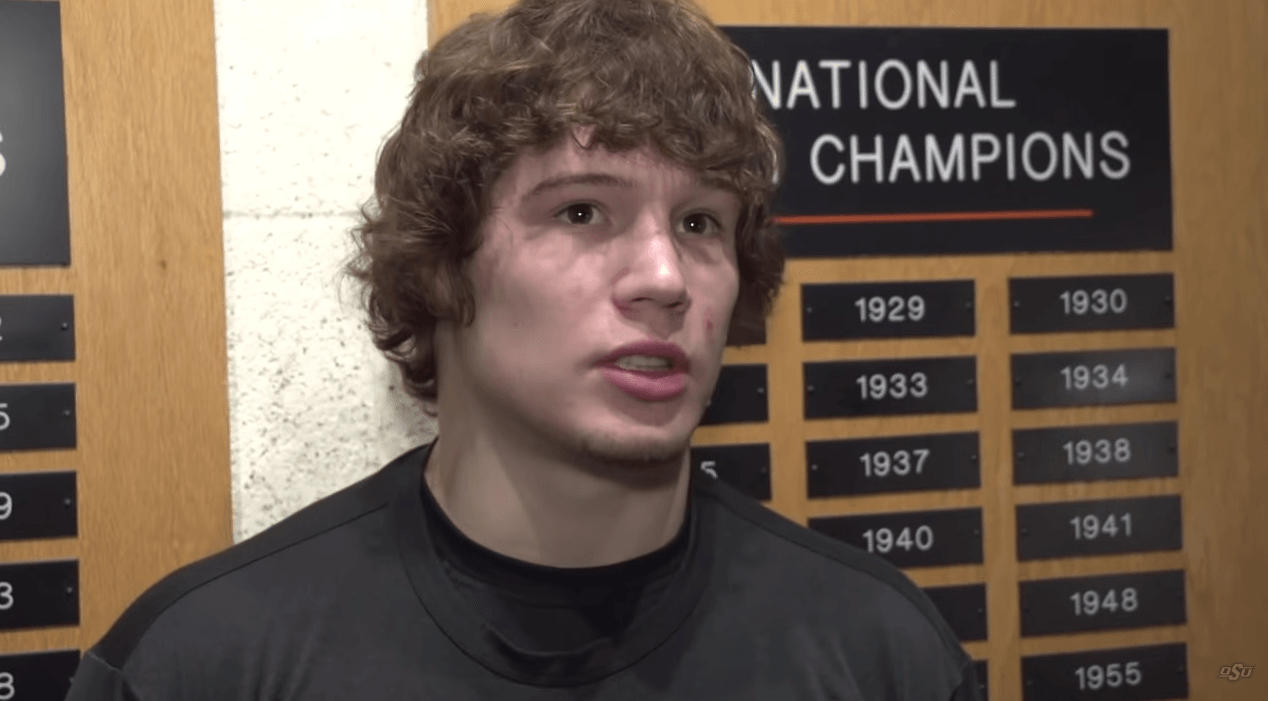 Alex Dieringer is looking for his second straight NCAA title. (via YouTube)

Welcome to Part 2 of our NCAA Wrestling Championship preview. Yesterday we looked at the first two weight classes. Today, we’ll look at four more. Wednesday, we’ll take a peek at the final four.

We come to our first weight that has a clear and heavy favorite. Logan Stieber (Ohio State) is 24-0 on the season and looking for his 4th NCAA title.

Oklahoma State fans might remember him from his 2012 national title match against Jordan Oliver in which Oliver wasn’t given a takedown in the final seconds. You make up your own mind, but I mean…

Anyway, if Stieber doesn’t win his 4th title, it will be probably be the biggest surprise of the tournament. Mitchell Port (Edinboro), Lavion Mayes (Missouri), and Devin Carter (Virginia Tech) are some of the few who have a shot at dethroning Stieber.

Dean Heil is the Cowboy at this weight, and is 14-seed heading in. Heil is 22-8 on the year, but has had trouble with ranked opponents, with a record of 2-4 on the year against such guys. He is a talented wrestler who can make a run, but look for him to accumulate points on the backside.

This weight class has a lot of experienced wrestlers. Jason Tsirtsis (Northwestern), while only a sophomore, is the returning national champ. He is the 2-seed entering the tournament, but many consider him to be the favorite.

Drake Houdashelt (Missouri) enters at the 1-seed and is 32-1 on the season. There seem to be a few wildcards in the field with Josh Kindig and Hunter Stieber. Both have had injury problems on the year, but both are also very experienced and talented wrestlers. Except them to wreak some havoc if each can get past their first match.

Josh Kindig is the Cowboy at 149, and as previously mentioned he has had some injury problems this season. If healthy he is one of the top wrestlers at this weight, as we saw him make an impressive run to the title match last year.

He enters the tournament unseeded and didn’t get any favors from the committee, as his first match is against third-seeded David Habat (Edinboro). Kindig posted this message on Twitter last week, and I tend to agree.

This is another weight like 125; a whole lot of fun and excitement. Isaiah Martinez (Illinois) is a RS Freshman who is undefeated on the year and enters the tournament as the 1-seed.

Martinez has been tested all year, and he has always risen to the occasion. Having wrestled in the Big Ten means he has beaten the likes of James Green (Nebraska), Dylan Ness (Minnesota), and Josh Demas (Ohio State).

This guy is for real.

Brian Realbuto (Cornell) is the two-seed and has 19-2 record on the year, a guy who beat some very good wrestlers last year in his run to an All-American finish as a freshman.

Anthony Collica enters the tournament unseeded for the Cowboys.

Entering with a 25-9 overall record, Collica has improved steadily over the course of the season. Collica jumped up two weight classes after competing at 141 pounds last season, and it certainly took some getting used to.

However, Collica is a very quick and technical wrestler who can compete with anyone in the tournament. This is another guy who will need to pick up valuable points on the backside to contribute to the Pokes’ chances in the team race.

165, like 141, is another weight that has a heavy, heavy favorite. Lucky for us, that favorite happens to be a Cowboy. Alex Dieringer enters the tournament as the 1-seed and has a flawless 29-0 record on the season.

Michael Moreno (Iowa State), Isaac Jordan (Wisconsin), and Nick Sulzer (Virginia) are some of the guys who have a chance to knock off Dieringer. Bo Jordan (Ohio State) or Sulzer would be the first guys I consider to have any chance of beating Dieringer, and that wouldn’t be until the semifinals.

If Dieringer doesn’t win the thing, the Cowboys will likely have no chance at the team title. Dieringer has been nothing short of dominant this year though, so I will be very, very surprised if he doesn’t.

Look for him to pick up bonus points early in the tournament, and overpower opponents late.