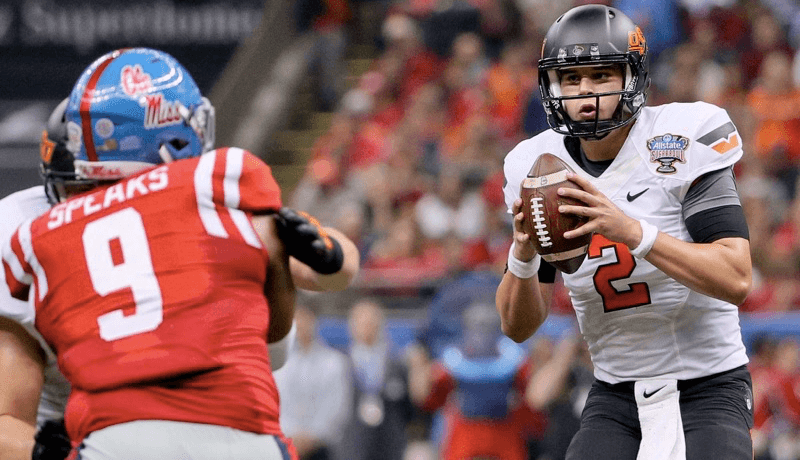 We have eight months to go until college football gets going again, but it’s certainly not too early to start thinking about where Oklahoma State is going to fit into the landscape.

Here’s a look at the projected two deep on offense with returning starters italicized (I simply used the bowl game starting lineups — I know the lineup changed throughout the season). Each player’s 2016 class is listed. My thoughts are below each position group.

It feels like Kolar will leapfrog the Oil Baron to play QB2 to Rudolph’s QB1 next year. Kyle Fredrickson had a good post the other day on how Kolar could slide into the J.W. role in 2016. That’s fine. I just hope Mike Gundy doesn’t use him as much as he did Walsh this year. I want a full, 13-game or 14-game season from No. 2.

The wildcard here is whether Barry Sanders’ son actually does end up in Stillwater. Could he disrupt the top two here? If Mike Gundy calling out his running backs recently is any indication then I would say the answer is yes.

That’s a pretty solid 1-2 combo on the outside.

Ateman should be primed for a big time season. It will be interesting to see which other WRs (Keenen Brown etc.) step up to fill the void left by Brandon Sheperd and Glidden.

McCleskey actually started the Sugar Bowl, but I’m not going to count him as a starter because David Glidden was the main guy. Has Austin Hays been at OSU since the Sean Sutton administration?

But we are loaded at the Cowboy Back position!

The good news is that Oklahoma State returns its entire offensive line. It also returns all its backups besides center.

The bad news is obvious. But Gundy got this. “We’ll improve on the offensive line with two things: experience and size,” he told the Oklahoman recently. “We need to find a guy to hand the ball to that can be more productive running the ball and not only get what we have blocked for them.”

One thing that will be intriguing is to see how many freshmen contribute on offense the way McCleskey and Jeff Carr did this season. I’m also curious about how Carr will be used next year. I just realized I didn’t include him on here even though I know he’ll be used a lot. Will he be a backup running back? Slot receiver? Tyreek 2.0? There’s not really a position for Tyreek 2.0 other than the “go do some crazy stuff out there, Jeff” position.

Overall, that’s a lot of italicized players. A lot of returning starters on a team that won 10 games. There are also a lot of backups returning. And who knows which redshirts could crack the two deep.[1. Although most of the big name freshmen who redshirted are on defense.] This team will be old next season. On paper, that’s fantastic, but the house of cards that came cascading down at the end of the year has everyone worried that maybe it won’t last as long into the season next time around.