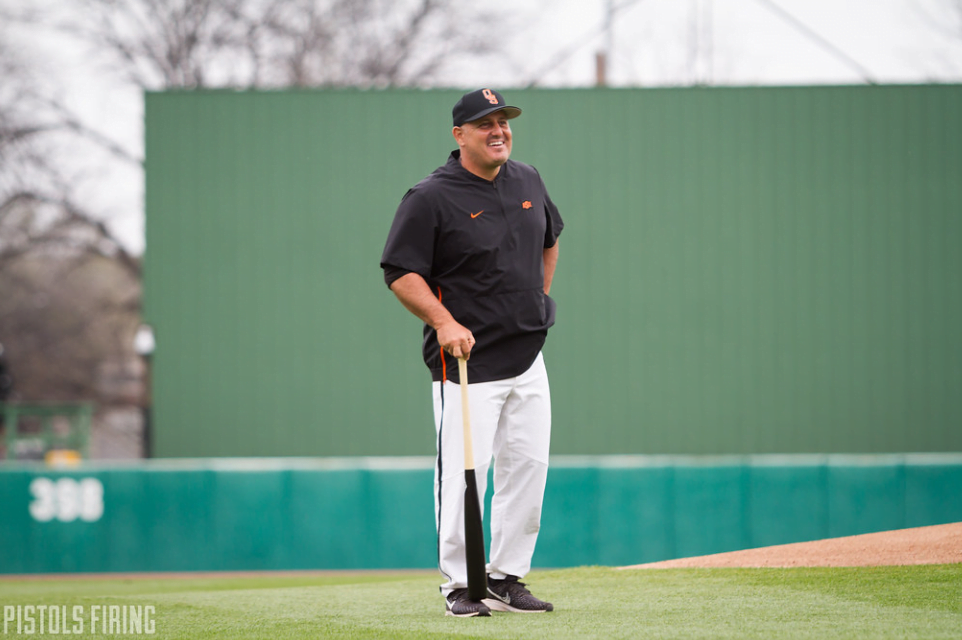 STILLWATER — How to you follow up a series with the defending champs? Bedlam of course.

Oklahoma State baseball coach Josh Holliday met with the media Wednesday to discuss his team’s recent series sweep of Oregon State and what his team’s upcoming Bedlam series entails. You can watch Holliday’s full interview here, but here are some of the highlights.

The first Bedlam series Josh Holliday played in was in 1996, but instead of what’s become the norm of a three-game series, the Cowboys and Sooners played each other five times in six days.

The series started in Tulsa before two games in Oklahoma City. There was then a day break before the teams met in Norman and played each other again the next day in Stillwater. OSU won four of the five.

“It was different because it was so much,” Holliday said. “It was too much to be honest with you. That’s probably why these videos that are popping up about the teams fighting back in the day because you put really competitive athletes in a competitive environment five times in six days, someone’s gonna get irritated.”

The fight Holliday is referencing is the infamous Bedlam brawl of 1989, which recently celebrated its 30th anniversary. The series went four straight days in 1989 with the teams splitting the series, but things got a little more Bedlam than normal in Game 4.

Holliday said he’s less on edge about the series as a coach, and that it’s his job to keep his team tame. He said he wants them to be in deep focus about the matchup, but not take it over the top.

“You don’t over advertise the series, but you certainly don’t down play it,” Holliday said. “I would never want to sit here and not be transparent with the kids about the importance of playing well in this series. It does matter.”

The Cowboys began the season with Jensen Elliott, Logan Gragg and Mitchell Stone as their weekend starters.

In May, only Elliott remains a regular starter, as Gragg has transitioned to the bullpen, and Stone hasn’t played since early April. Brett Standlee has taken over Sunday starts since the start of Big 12 play, and Parker Scott has been that Cowboys’ Saturday starter for the past three weekends.

Scott missed all of 2018 and most of 2017 because of injury, but he has torn it up in what’s his sophomore season. His 1.65 ERA is top among Cowboys with at least eight innings pitched, having allowed only eight runs in 27 1/3 innings of work.

“When Parker is sharp, he’s pretty darn good,” Holliday said. “… We’ve seen a couple of outings where he’s been awfully good. He’s still kind of getting his endurance built up. He continues to work his tail off, and he’s getting stronger.”

Scott hasn’t been the most conventional of starters this far, having only thrown more than four innings once this season, but OSU pitching coach Rob Walton is putting together an effective formula behind him. The Cowboys have a deep bullpen with the likes of Gragg, Joe Lienhard, Peyton Battenfield, Ben Leeper, Brady Basso and Jake Lyons. Walton has been able to adjust his staff to provide solid performances no matter how long a starter goes on a particular day.

“Some years, you might start out one way and just roll with it and might not change much,” Holliday said. “Some years you have to adjust as you go. This has been a year we’ve had to adjust as we’ve gone, but I think you see kids really settling into the right roles now.”

Last season, five Big 12 teams got into NCAA regionals, behind the SEC’s 10 and the ACC’s six. It looks to be a somewhat similar story as of now. Texas Tech, Oklahoma State, West Virginia and Baylor are almost certain locks at this point, ranked in the Top 30 of college baseball’s RPI. Oklahoma is ranked 44th in the RPI and Texas, despite being in last in the conference, is next at No. 55.

Baylor is atop the Big 12 standings at 14-6, but it’s tight from top to bottom with Tech looking like the favorite as of now, having won eight of its past nine conference games.

The Cowboys beating the Beavers three straight days proved that despite maybe not having a standout team right now, the Big 12 is strong.

“There’s a lot of power arms,” Holliday said. “There’s a lot of incredibly talented individual players. Look across our conference, there’s I think five or six kids right now projected first-round draft choices out of the Big 12. I don’t remember a year like that in quite some time.

“There’s some elite-level players. There’s some very well-rounded teams, and there are some coaching staffs that are very prepared. The games have been very, very high level. One pitch here or there could shift a game.”

ESPN’s Keith Law had four Big 12 players in his 1.0 mock draft. Nick Lodolo (TCU), Alek Manoah (WVU), Josh Jung (TTU) and Shea Langeliers (BU) were all projected to go in the top 20 in a draft the Oregon State catcher Adley Rutschman was picked to go first in.

If it comes down to it, the Oklahoma OSU beating the Oregon OSU could be quite the benefit for other Big 12 teams trying to highlight there resumes.

“I’ve been saying it for a long time, Big 12 baseball is really good,” Holliday said. “I hope people continue to see that and make sure our league is represented in the postseason by four or five or six teams. I hear about all these other conferences thinking they deserve 10 teams. Well, I think we deserve six.”