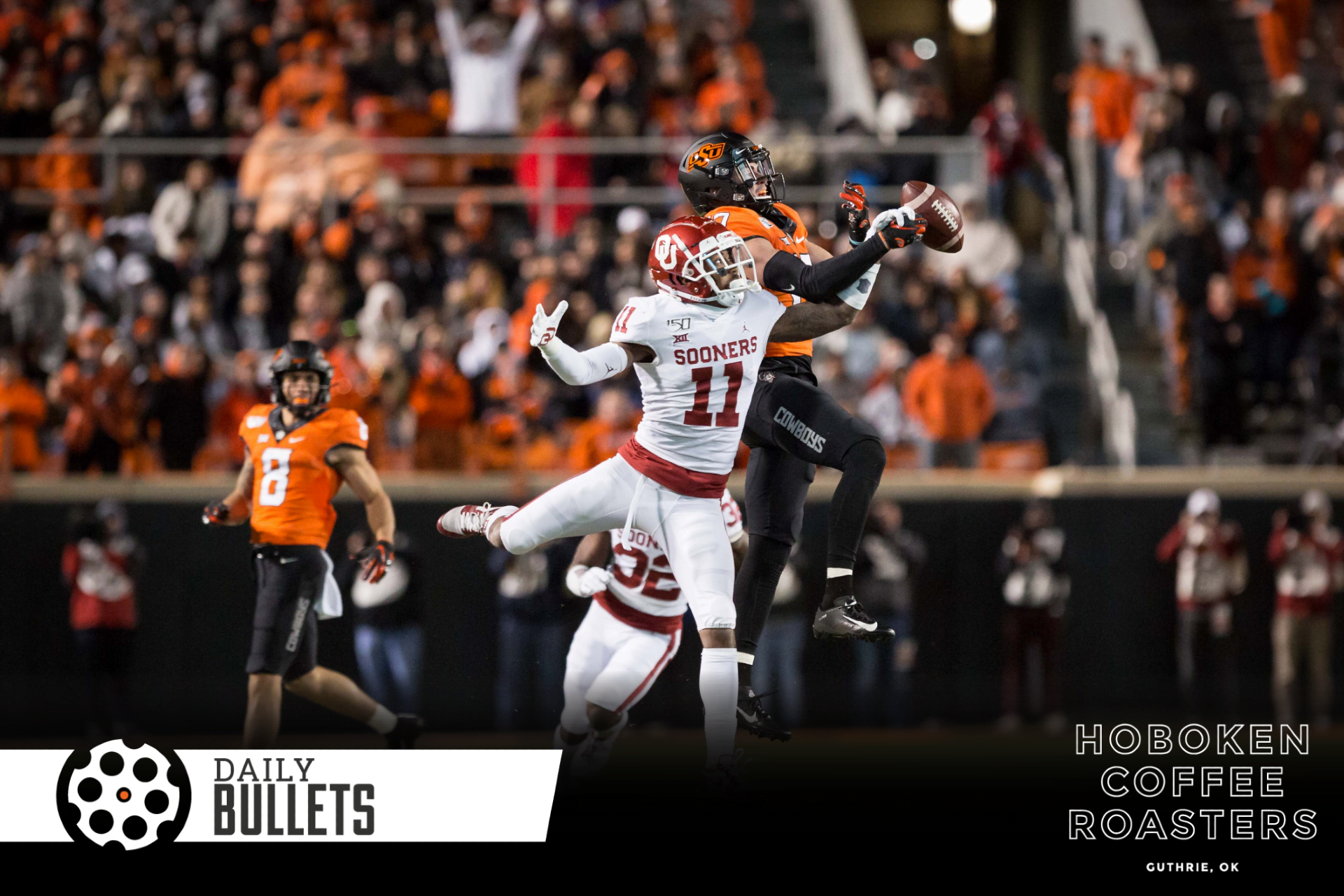 Sorry for a tardy Bedlam Bullets. Last night was a late one.

It’s the curse that lingers for Mike Gundy. At the same time that he has good Oklahoma State teams, Oklahoma has great quarterbacks. [Tulsa World]

OU is better than it has ever been, which is very unfortunate. Of course, it has also beaten OSU with Blake Bell (twice) and Landry Jones.

And speaking of 1956, that’s what this game was like. No Bedlam fireworks. No crazy scores. No abominable football, like they play in the Iron Bowl down in Alabama. This was old-fashioned, grind-it-out football. Maybe the kind the College Football Playoff committee likes. [NewsOK]

The CFP committee will move the goalposts based on however SEC teams are playing in any given moment (more below from James Mora Jr.).

• KB goes in on Gundy following Bedlam loss No. 13.

But it’s fair to question at this point whether this program will ever usurp the gold standard OU has set in this state. Save for a lightning-in-a-bottle 2011 season that was nothing short of magical, Gundy has beat Oklahoma once — and it came on the worst OU coaching decision of the century: re-kicking to Tyreek Freaking Hill. [PFB]

Unlike Kyle, I didn’t expect OSU to win this year. Like Kyle, I do wonder what the plan is for the future.

• Jenni Carlson on how OU shut down Chuba.

• Speaking of, Chuba didn’t sound like he was real fired up about a bowl game.

• Sounds like Isaiah Jacobs will take his visits to Ole Miss and Maryland, too. ($)

• That Gundy needs to chop the mullet is not a great take.

• This was from earlier in the week, but it still applies: OU has a newfound respect for Bedlam.

• This is so good. I don’t expect you to have watched every game, but at least, you know, prepare or read something.

Pretty obvious Jim Mora hasn’t watched @BUFootball this year. Apparently we just flash and put up big points. We also don’t know how to tackle. Either he is wrong or I’ve been watching the wrong team all season. #SicEm #ESPNHalftime (See Videos below) pic.twitter.com/69bQkD4pj6

LSU gave up more points to Texas this year than Baylor and OU combined. A tough scene.https://t.co/MFlijmHdgn

• Crootin SZN! Woz needs to do some work over the next few weeks.

Recruiting SZN!! Had a difference maker on campus all weekend, and time to go find some more ballers!! Go Pokes!! 🤠🆙 pic.twitter.com/hdlIsdbZrO

This was Chuba Hubbard's response when asked about possibly being a finalist for the #Heisman This kid is all class. #OkState @CowboyFB Humble to the end. #JustChuba pic.twitter.com/wlLqKgYEmv

This is my own personal hell.

Boone Pickens Stadium is empty — except OU’s band, which is, of course, playing Boomer Sooner on repeat. pic.twitter.com/kK4Yr3ZjYy

Our hearts are heavy.

After his courageous fight against ALS, our dear friend Allan Trimble passed away peacefully this morning at St. Francis hospital. He was surrounded by his family.

His legacy of faith, family, and football will never be forgotten.