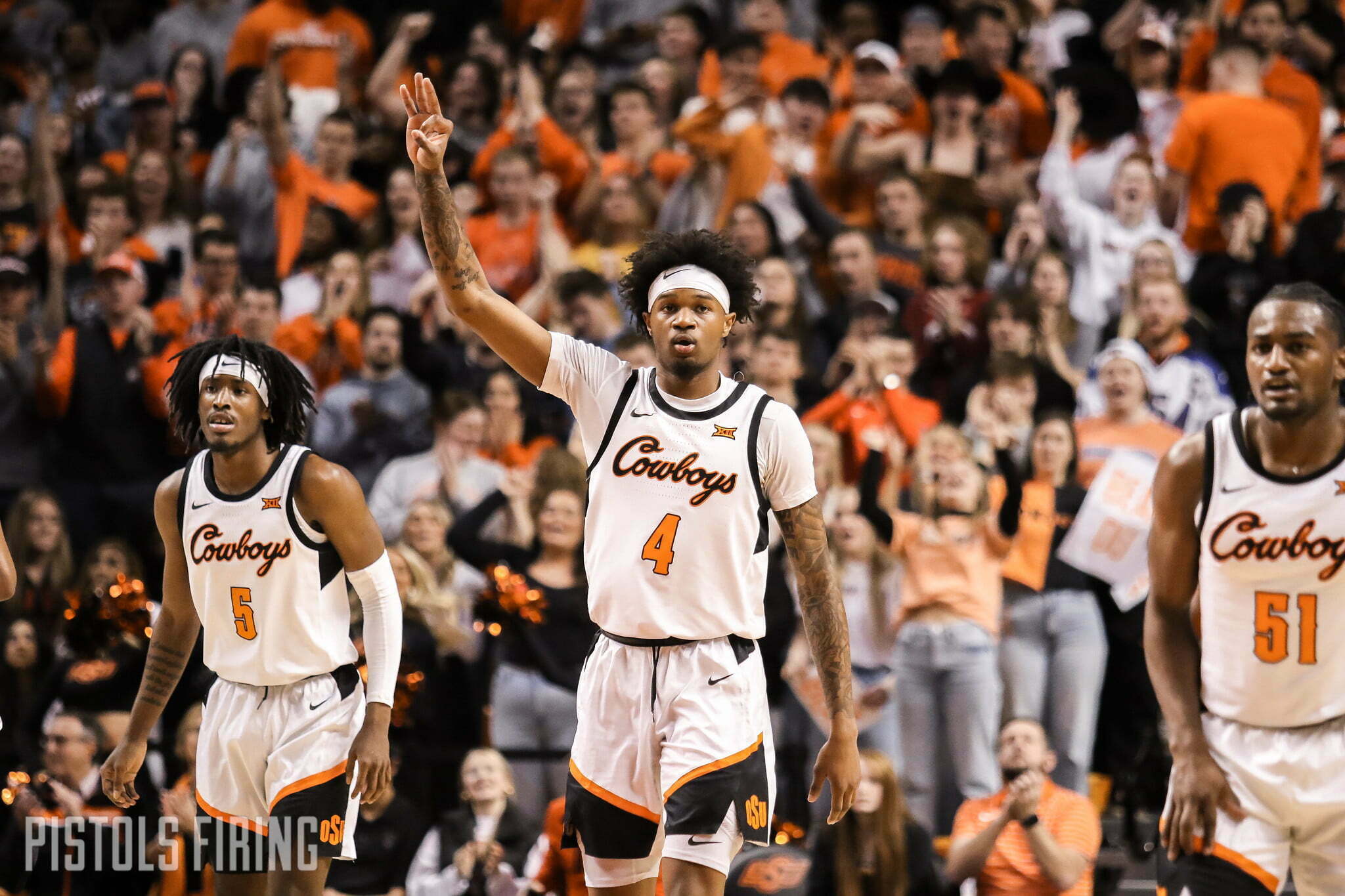 Where has this team been?

Oklahoma State defeated Oklahoma 72-56, taking Round 1 of this year’s Bedlam series, thanks to a huge second half, a raucous home crowd and the Cowboys ending the game on a 13-2 run. The Cowboys came in having lost three straight, and desperate for a win. And they earned it with an offensive outburst in the second half, a fine compliment to the Pokes’ trademark lockdown defense.

But the Cowboys’ first half looked much like their last three games. After starting 1-for-2, the Cowboys missed seven-straight shots allowing the Sooners to rattle off a 7-0 run. The ugly see-saw went back and forth for most of the first half.

OU’s Grant Sherfield was fouled on back-to-back 3-point attempts and that steady dose of charity shots seemed to ignite his shooting stroke. The first-year Sooner looked ready to return to Norman a Bedlam hero knocking down four-straight shots and 15 of OU’s first 24 points, fueling a 9-0 run.

The Cowboys then went 6:44 without a single made field goal before a Bryce Thompson runout — his first two points of the night — brought the Pokes within 26-22 with 1:40 to play in the first half. Oklahoma’s Milos Uzan answered with consecutive buckets before Thompson ended the period on a stepback jumper from the top of the key.

The Cowboys hadn’t shot 40 percent or more from the field in any of their last three losses and didn’t look intent on bucking that trend after a 31-percent first-half shooting performance. But something changed in the locker room.

OSU, which shot just 1-of-7 from the 3-point line in the first period, knocked down its first five deep balls in the second, each turning the dial up another notch on a rowdy home crowd inside Gallagher-Iba Arena. Bryce Thompson’s hot hand didn’t cool over intermission. He made all three of his attempts beyond the arc with Woody Newton knocking down a pair and John-Michael Wright hitting another.

But no one had a better halftime than Avery Anderson. The Cowboys’ second-leading scorer has been in quite the slump to start 2023, coming in averaging just six points in Big 12 play. After going 1-for-6 in the first half, Anderson started the second 3-for-4 and ended the night scoring 14. Another great sign was the five-to-zero assist-to-turnover ratio. It was his first game without a turnover since his sophomore season. He crossed the 1,000-point career mark on his second shot after halftime.

The Cowboys overcame a six-point deficit in the first two minutes of the second half, built as much as a 10-point lead midway through the period and kept the Sooners at arm’s length, or farther, the rest of the way.

Bryce Thompson led all scorers with 19 points on 12 shots (a perfect 3-for-3 from deep) and grabbed a career-high nine rebounds.

Kalib Boone scored 15 on just 11 attempts and pulled in seven rebounds. In his first career start, Woody Newton scored his OSU-high 12 points on 4-of-6 shooting. He was 2-for-3 from deep.

The Cowboys’ recent offensive struggles have come while Moussa Cisse was sidelined. He played his first two minutes in two weeks in the first half, but the Cowboys’ offensive outburst came with him on the pine. Cisse wasn’t his normal, athletic-anomaly self but just having him on the court, though briefly, was a good sign for the rest of the season.

This is what a Top 10 team in defensive efficiency looks like when it can produce some offense. Grant Sherfield, who couldn’t miss in the first half, was locked down by the Pokes going 0-for-5 in the second. And even more importantly, the Cowboys were able to not only protect but add to their late lead down the stretch with a 13-2 run to end the game.

The Cowboys built a nine-point with four and a half minutes left. On the ensuing possession, a Boone block caused a Sooner shot-clock violation and GIA’s top almost came off. Boone was flexing at the courtside Cowboys. Mike Boynton shed his orange blazer and was pumping his fists at the student section. We’ll see if the Cowboys can bottle up some of that second-half lightning, but this was a fun one for the home crowd.

With the win, Oklahoma State has won six of the last seven rounds of Bedlam. The Cowboys move to 10-8 on the year and 2-4 in conference play. Next up, the Cowboys host No. 12 Iowa State on Saturday at 1 p.m.