The regular season has drawn to a close, which means the real season starts this week. The first round kicks off Wednesday, with the championship game Sunday afternoon. I take a look at the big stories heading into the tournament, providing a breakdown of the favorites and my prediction.

Fox owns the rights to this year’s Big 12 Tournament. Every game will be on Fox College Sport except the championship game, which will air on Fox Sports 1. If you want to stream the games online, you can go to www.foxsportsgo.com (requires a cable subscription).

Battle For A National Seed

TCU wrapped up the regular season title and has done enough this season to earn a national seed, barring an epic collapse in Tulsa this week. OSU, on the other hand, has more to prove. The Cowboys have an impressive resume, including two wins over the No. 1 RPI team, but a few too many conference losses have OSU on the outside looking in when it comes to a national seed. I’m afraid the Pokes will have to run the table this week, and even then might need a bit of help.

TCU hasn’t lost to a Big 12 opponent since April 12, a string of 11 consecutive wins. Texas and TTU are the only other schools coming into the tournament on a conference win streak, leaving five conference members on losing streaks as the tournament begins. The Sooners might be in the worst shape, having been swept by the Horned Frogs last weekend.

Better To Be Second?

The No. 1 seed hasn’t won this tournament since 2009, when Texas won it’s fourth (and most recent) tourney title. TCU looks to defend last year’s trophy after beating OSU in the finale. Michael Freeman got his first career start in that game; needless to say, if these two meet in the final again, TCU will see a very different Freeman from last year.

Texas Christian Horned Frogs (43-9, 18-5 Big 12, No. 1 Seed)
What the tournament means to TCU: I’m sure it would be nice for the players to win a second straight tourney title, but TCU doesn’t really need it. They should have already clinched a national seed, and will get to host a Regional and Super Regional as long as they advance. The Horned Frogs have been in the league for five years now, and have really proven they belong.

Best-case scenario: The Horned Frogs breeze through their side of the bracket before meeting the Cowboys in a rematch of last year’s final. And just like last year, TCU cruises to the title in dominating fashion, impressing voters and earning the top seed in the NCAA Tournament.

Worst-case scenario: Baylor beats the Horned Frogs for the first time this season, knocking TCU into the loser’s bracket on Day 1. Day 2 brings more trouble as TCU faces Tech in the 9 a.m. game, and the Horned Frogs aren’t up for the challenge, ending their repeat bid and making them sweat on Monday when the national seeds are announced.

Oklahoma State Cowboys (34-17, 14-8 Big 12, No. 2 Seed)
What the tournament means to OSU: Holliday & Co. are a virtual lock to host a regional in Stillwater, but they can still make a play for a national seed. That would allow the Cowboys to host a Super Regional for a second straight year. After last season’s slip-up to UC Irvine in the Super Regional, there’s some pressure for this team to make it to Omaha, where the Cowboys haven’t visited since 1999.

Best-case scenario: A rematch with a top-5 TCU team, but this time Michael Freeman is ready to handle himself in the spotlight. The senior pitches a shutout, the Pokes celebrate their first postseason title since 2004, and on Monday find out they stole one of the last available national seeds.

Worst-case scenario: OSU only played West Virginia once this year, and the lack of experience against the Mountaineers draws the only upset of the first round. The Cowboys face OU for the sixth installment of Bedlam this year, only to find more heartbreak at the hands of their rival. The Pokes learn on Monday they have to travel to a Regional, making their path to Omaha even more difficult.

Texas Tech Red Raiders (30-22, 13-11 Big 12, No. 3 Seed)
What the tournament means to TTU: Tech has locked up another winning season, but fans are a bit underwhelmed after last year’s trip to Omaha. The Red Raiders have something to prove this week, as they are still in the running to host a Regional. However, it will require a strong showing and possibly beating one of the top two seeds if TTU wants to stay in Lubbock when Regional play begins next week.

Best-case scenario: Tech rides their top-three pitching staff all the way to the championship game, where they catch a tired and depleted OSU staff and win their first baseball title since 1998.

Worst-case scenario: Texas catches the Red Raiders by surprise in the 9 a.m. opener, dropping them into the loser’s bracket. From there, Tech suffers more humiliation at the hands of Baylor, and Monday’s news has them traveling way out west for NCAA tournament play.

Oklahoma Sooners (32-25, 13-11 Big 12, No. 4 Seed)
What the tournament means to OU: The Sooners are 3-7 in their last 10 games and are quickly falling down the list of 64 playoff teams. This week will determine if they get to keep playing next week. The Sooners really need a good showing to prevent being the fourth seed in a Seattle Regional, or something crazy like that.

Best-case scenario: OU had the best offense in conference play with a .284 batting average, and use that to power through the Wildcats. A Bedlam matchup looms in the second round, and despite the matchup on paper leaning toward the Cowboys, OU improves to 9-1 against OSU in the Big 12 tournament. Those two wins are enough to clinch a spot in a Regional.

Worst-case scenario: The struggles to end the regular season continue, and K-State hands the Sooners a loss in the first round. From there, OU falls victim to another upset as West Virginia keeps its title hopes alive. The biggest loss comes Monday, when Sooner players and coaches are gathered to find out they were among the first four teams not included in the NCAA tournament.

The Rest Of The Field

Texas Longhorns (26-25, 11-13 Big 12, No. 5 Seed)
It’s been a down year for Texas, and there have even been rumors of legendary coach Augie Garrido occupying the hot seat. The Longhorns can never be counted out, thanks to Augie and an experienced team. However, it’s a rough path to the title game, which is where the ‘Horns might have to get if they want to make the NCAA tournament.

Kansas State Wildcats (26-28, 10-14 Big 12, No. 6 Seed)
K-State had the worst offense in conference play this season, hitting a lowly .240 with a more dismal .301 slugging percentage. The pitching staff hasn’t been bad, but the lack of run support has been demoralizing at times. Tyler Wolfe has been one of the lone bright spots, hitting .366 in Big 12 games. But it’s going to take more than him for the Wildcats to pull any upsets.

West Virginia Mountaineers (27-25, 9-13 Big 12, No. 7 Seed)
WVU actually went 18-12 in nonconference games, and looked as though they could make an impact in the Big 12 this season. Needless to say, that’s not how it turned out. They haven’t been impressive at the plate or on the mound, and I expect them to go out quietly this week.

Baylor Bears (21-30, 9-15 Big 12, No. 8 Seed)
The Bears made it in by a half-game over Kansas, but it’s not gonna matter. Baylor is winless against TCU this season, and that won’t change this week. It will be nice for the younger guys to get some extra practice and two more games, but Baylor should already be looking ahead to next year. 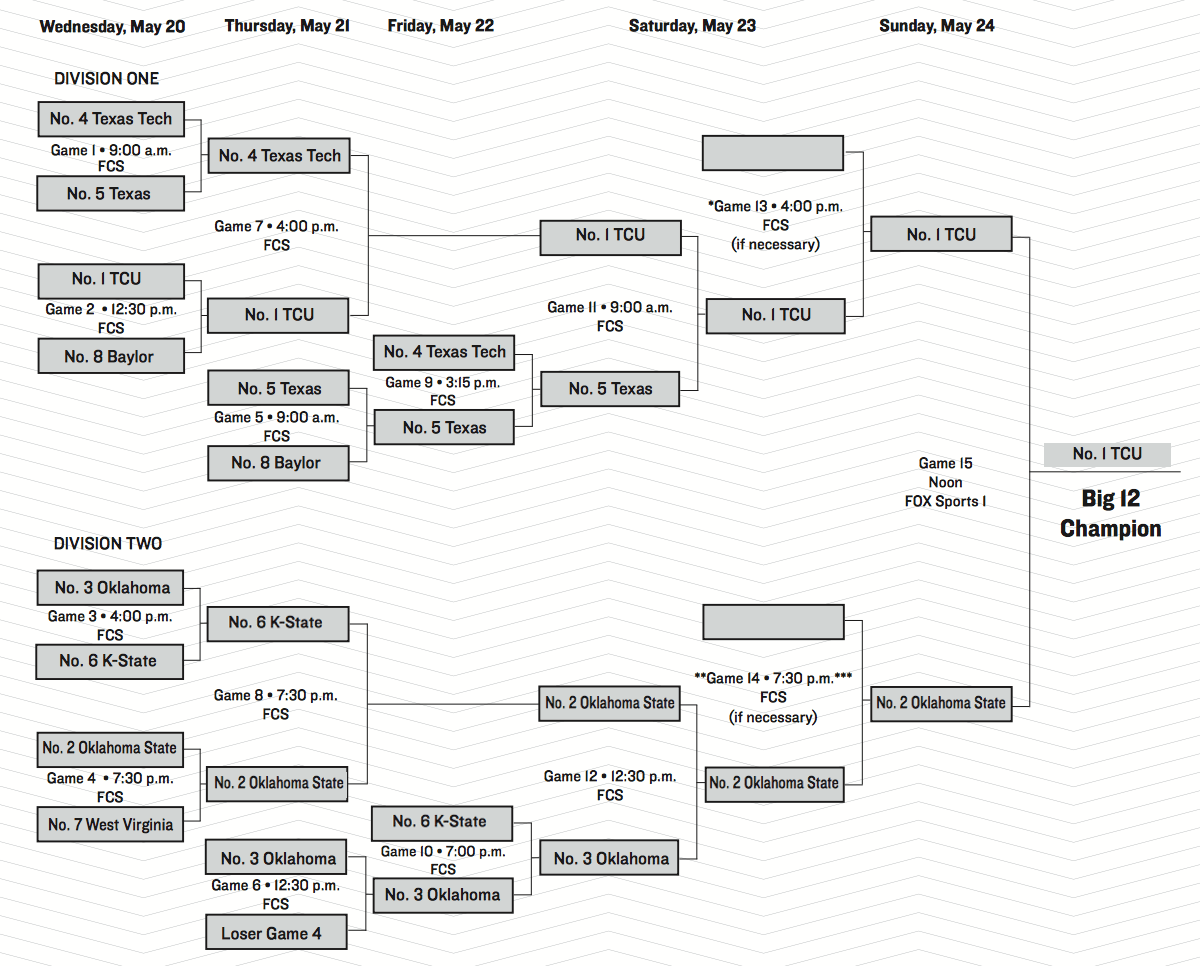 Not quite chalk, but I think the Horned Frogs are too good this season. Seven of their nine losses have come away from home, but again – just nine losses this year. OSU did take two of three from TCU in Fort Worth (the only two home losses TCU had this season), and the Cowboys played nine neutral site games – including one at ONEOK Field, the site of this season’s tournament. So if anyone is going to prevent the Horned Frogs from taking the title, it will be OSU.

Don’t agree with me? (Of course you don’t.) Then let me know in the comments.