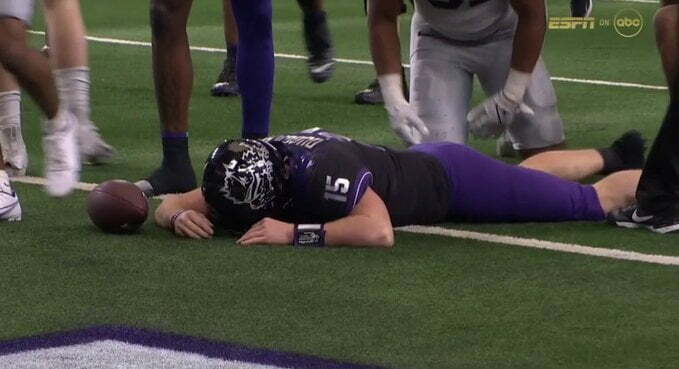 TCU’s final possession of the 2022 Big 12 Championship should have come with a trigger warning for Oklahoma State fans.

Kansas State defeated TCU 31-28 in overtime to earn its first Big 12 title since 2012, and the Wildcats did so by weathering a heroic would-be (still could be?) Heisman moment from Max Duggan and then making a huge goal-line stop in overtime, a la Baylor in 2021.

Before we get into all the gory details, a quick recap.

After TCU and Duggan struck first, Kansas State tied the game at 7 in the waning seconds of the first quarter when Will Howard found Ben Sinnott in the end zone. The Wildcats never trailed the rest of the way.

Howard went 18-for-32 for 199 yards and three total touchdowns, but it was Deuce Vaughn that carried the Wildcats the majority of the way. Vaughn racked up 130 rushing yards, a score and 30 receiving yards on two catches.

It was hard not to root for the Big 12 Offensive Player of the Year. After an earlier interception that led to a K-State touchdown in the fourth, Duggan — almost singlehandedly — completed two scoring drives to tie it up and force overtime. On the latter, he broke loose for runs of 15, 13, 19 and 40 yards before picking up eight more and collapsing in the end zone. He followed that immediately with a successful 2-point conversion pass attempt to tie it at 28.

But in overtime, the Frogs went to Duggan just once in five plays, a 5-yard run that came up inches short of the goal line. In the final two plays, Duggan handed it off twice to Kendre Miller and each time he came up empty, allowing Kansas State to win the title with a walk-off field goal on the ensuing possession.

To add even more fuel to the firey mob in Fort Worth, it appeared, at least during a TV replay, that Miller might have broken the plane.

It would have been a tough one to overturn based on this angle since we couldn’t see if his knees were down or not definitively. But don’t tell that to TCU fans.

With Utah’s drumming of USC in the Pac-12 Championship on Friday — and with the way this one came down to the wire — TCU should be in good shape to make the playoff come Selection Sunday. But the end result does add some uncertainty to what seemed like an automatic in for the Big 12.

So, if you know any TCU fans, maybe give them the day before reaching out to share that you’ve been there and you feel their pain.